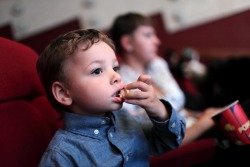 So, why did I take my 3-year-old son to see Cinderella? Because he wanted to see it. It’s that simple.

Every time we saw a commercial for it or walked by our local movie theater, with its huge poster displayed in the window, he’d ask: “Can we go to see that?”

And how could he not be interested in it? There’s a pretty girl, a dashing prince, a castle much like the one he plays with on a daily basis, cute critters, sparkly magic, fireworks and a big, freaking party.

I certainly wasn’t going to say no just because he’s a boy. And let me tell you, so much of him is all boy—traditional, rough-and-tumble, sports-loving boy who already has a preschool “girlfriend” he blushes around and plays Ring Around the Rosie with.

Because isn’t that what we all want for our kids and for ourselves? To be whole? So much of that, in my opinion, is about balancing the masculine and feminine sides of our personalities. About knowing who we are and expressing all of our interests, all of ourselves, without worrying that someone will mock us for it.

I like to think that I’m pretty self-aware when it comes to this stuff, but even I struggle with it sometimes. It’s just so culturally ingrained in us. For example, the place where my son gets his hair cut features a little store at the front. (Totally evil, by the way. I can never escape without getting something.) The last time we went, my son was obsessed with getting a very pink hairdressing set—a little pink plastic case with a pink hairdryer, a pink brush, pink barrettes, you name it. The first thing that crossed my mind? That’s for girls. No way in hell did those words cross my lips, but I’m embarrassed to admit that I did ask him a few times if he was sure that he wanted it, if he didn’t want something else. Nope, that was it, and that’s what came home with us.

My husband raised an eyebrow when we got home, as did the grandparents, but I quickly silenced any objections. This was what he wanted, and so what? He’s a kid, and kids should be able to explore any and all things that they find interesting. And if he were older and still expressed an interest, that would be OK, too. I love my kid unconditionally, end of story.

But much like my point with Cinderella, why wouldn’t he want that hairdressing kit? It directly reflected the experience he’d just had—getting his hair cut—and the fact that pink is a traditionally “girl” color never crossed his 3-year-old mind. 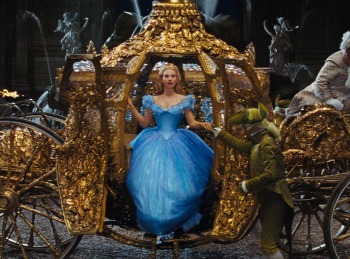 We watched, we enjoyed, he ate popcorn. His favorite part? The music. And the movie did have a sweet overall message, from Cinderella’s ill-fated mother: Have courage, be kind and believe in magic. I can certainly get behind that…even if I have issues with princess culture and the whole falling-in-love-at-first-sight thing.

Which brings up a funny point: I would’ve had a lot more of an internal struggle if I had a daughter who wanted to see this movie. I’d want to make sure that I wasn’t reinforcing stereotypes and sending the wrong message about relationships, love, gender roles, female empowerment (or lack thereof) and waistlines.

And you know what? I still had those (age-appropriate) conversations with my son after the movie. Because that’s what parenting, for me, is at its essence: talking to your kids about what you think, about what they think and what it means in the larger scheme of life.

Still…who knew that a fairy tale and a killer pair of shoes would make for such deep thought and such a great learning experience—for both of us?

Tell Us: What gender issues do you think about when raising your kids?