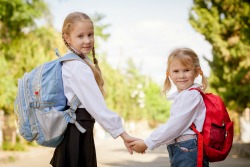 At what point do you think your kids will be old enough to fend for themselves? To have a little independence? To be away from you and to be safe? To enjoy the freedom to explore and to learn about the world around them, without your constant watchful presence—like kids did back in the day?

That is definitely the question of the month.

Chances are, if you’re a parent, you’ve heard about Danielle and Alexander Meitiv of Maryland, the vocal proponents of “free-range parenting.” (A philosophy that, truthfully, always makes me think of raising chickens, not kids.) It’s a hands-off style of parenting, and in the case of the Meitivs, that translates into regularly letting their 10-year-old and 6-year-old kids walk unaccompanied by an adult through their neighborhood—to school, to the park, you name it. Because of that, they’ve been investigated by Child Protective Services, and their kids were picked up for a second time earlier this month when they were walking home from the park.

This is a complicated situation on a variety of levels, whether you believe in free-range parenting or not. The police didn’t contact the parents for hours after they picked up the kids—ostensibly, to make a point. And this incident occurred after the Meitivs continued to let their kids be out and about without adult supervision, despite previous run-ins with the cops and CPS—also to make a point. Those two children are being used as pawns by both sides, and in my opinion, that is immensely unfair to them.

Being a mom or dad isn’t easy, and it sure as hell isn’t going to be summed up with a catchy, media-friendly phrase. Free-range parenting. Helicopter parenting. Attachment parenting. Authoritative parenting. Tiger-mom parenting. I could go on, but can any one philosophy really encapsulate the contradictions and challenges of raising a kid?

In the end, this is what we’re really trying to figure out: How do we balance a child’s safety with his burgeoning independence? How do we foster individual responsibility while also ensuring that he’s making good decisions? How do we grow well-rounded, well-adjusted human beings in this crazy, often-dangerous world?

I’ve been struggling with my thoughts on this not only for the past week but since my son was born. Because the minute I met him, I realized that I couldn’t bear the thought of anything bad ever happening to him—and I never wanted to leave his side. Seriously, if I didn’t have to, ever. That said, my mama-bear impulses have also always been at war with my desire to make sure he turns into a functioning adult someday. Someone who isn’t scared, someone who has life experiences that motivate and shape him, someone who is not entitled, spoiled or so sheltered he wouldn’t know a good decision if it smacked him upside the head.

In my mind, it’s the most precarious balancing act I’ll ever do. The problem is, I can read a million statistics about how kids today are safer than they’ve ever been. About how child abductions are on the downswing. About how fewer children are being murdered, sexually abused and hit by cars. All very rational…but all of those horrible things still happen, and I don’t want my son to be on the wrong side of those statistics.

People also argue that we survived the big, bad ’70s and ’80s without this constant supervision and turned out OK. Mostly. But a few new dangers have popped up since the good ol’ days. Yes, there are the scary vans (side note: why does anyone still buy those things if not to be totally creepy?), but there are also the cyber predators, the video-monitor peeping toms, and the straight-out-of-the-crib kidnappers. Maybe my perspective is skewed by the fact that I live in New York City and am always on semi-high-alert. Or maybe I’ve just watched too many episodes of Criminal Minds.

So what does that mean for me? It means that I might (*might*) be OK with my 10-year-old walking a short, reasonable distance by himself, but I’d start having heart palpitations when it came to a 6-year-old doing the same thing. Even if the kids were well-versed in safety and their parent-approved routine. Even if they were super responsible. Even if we lived in the quaintest, safest neighborhood in the world. (If there is such a thing.)

Thankfully I have a few years before I have to deal with any of this. In the meantime, I’m not letting my 3-year-old out of my sight.

But that’s me and what I’m comfortable with for now. As long as we’re not talking about infants and toddlers when it comes to being out on the range by themselves and we’re not talking about truly life-threatening situations, shouldn’t we let parents be responsible for parenting their own kids? Because, within reason: Your kids, your choice.

Tell Us: What do you think of free-range parenting and this latest controversy?