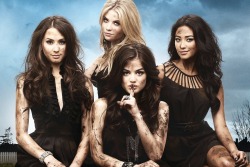 Guys, I think that I’m old. Like, officially old. And I’m not happy about this fact or this realization. At all.

I blame the ridiculously lovely ladies of Pretty Little Liars.

Everyone’s got a TV obsession. Most of my friends have binge-watched Breaking Bad and Orange Is the New Black over the last six months. Me? I’ve got my over-the-top, melodramatic doctors (Grey’s Anatomy), my psychotic criminals (The Following) and my supernatural boy-toys (Supernatural—hello, Winchester brothers). But the one show that I actually turn off my iPhone for and cozy up to as soon as the toddler starts snoring softly is Pretty Little Liars.

If you like things that are awesome and you don’t watch, well, you really should. Here’s the general plot: Four BFFs are reeling over the death of another friend, Alison, and as they try to figure out what happened to her, they’re stalked and tormented by a phantom mean girl who calls herself (or, ahem, himself) “A.” Over the course of the last few seasons, A has blackmailed the girls, threatened their loved ones and gotten homicidal.

As a viewer, you can’t help but cringe, squeal and yell at the TV as all of the drama unfolds, and of course, you’re always pulling for Aria, Emily, Hanna and Spencer because you can relate to them. It’s vicarious chills and thrills at their finest. I mean, this could be happening to you! It could be happening to me!

Because I’m somehow in my 30s, and I’m closer in age to the girls’ parents. As in, if I were to go on a casting call for the show, I’d be auditioning to play the mom of one of the girls. Even though in real life, I have a two-year-old. Even though in my head, I think that I’m still 26—and on some days, honestly, 18. Even though 18 is not my age but the amount of time that I’ve been with my husband.

To put it bluntly: WTF?!

OK, so I’m identifying with and rooting for the teenagers. In my defense, they’re like the teenagers of Gossip Girl and the 90210 reboot, living lives way more interesting than any teenagers and most adults on the planet, wise beyond their years and with a wardrobe I would (almost definitely literally) kill for.

But then there’s the romance. Everyone’s got a boyfriend—except for Emily, who has a girlfriend—but the big forbidden love comes with Aria…who’s dating Ezra…an adorable, bookish twentysomething guy…who, they learn after the romance starts, is her new high school English teacher. The scandal! And, just like every other viewer out there, I’m rooting for them as a couple. (Well, until recently, but that’s another crazy spoiler of a story.)

In what reality would the adult me ever be rooting for an underage student/teacher love connection? I try to tell myself that it’s Thorn Birds–esque or even Twilight-esque, but I know that I’m trying to convince myself of a pretty little lie. I have honest-to-God lost my mind.

This is not the only time that I’ve forgotten exactly how old I am. When I read news stories about people, particularly about parents, I’m always curious how old they are. That mom of three whose house tragically burned down was 35? Oh, that sounds old, and “35” definitely looks old when you see it in print. Oh, wait…I’m older than that. And don’t even get me started on “over the hill” athletes.

If I get pregnant again, I know that it’d technically (and I mean, technically as in medically speaking) be classified as a geriatric pregnancy. But thank God I live in New York City, land of the late pregnancies, and no one would ever dare utter those words to me. Forget the wrath of A—I’d be way more murderous than that.

But here I am, blissfully enjoying my 30s and really thinking that they’re the new 20s. Maybe I’m in denial, but you know what? That’s just fine with me because I’m happy. (With everything except the little wrinkles around my eyes.)

Now if you’ll excuse me, I have a new episode of Pretty Little Liars to watch, and I can’t believe what A’s about to do….

Tell Us: What’s your favorite guilty pleasure? And what do you think you’re probably too old to still love…but really don’t care?