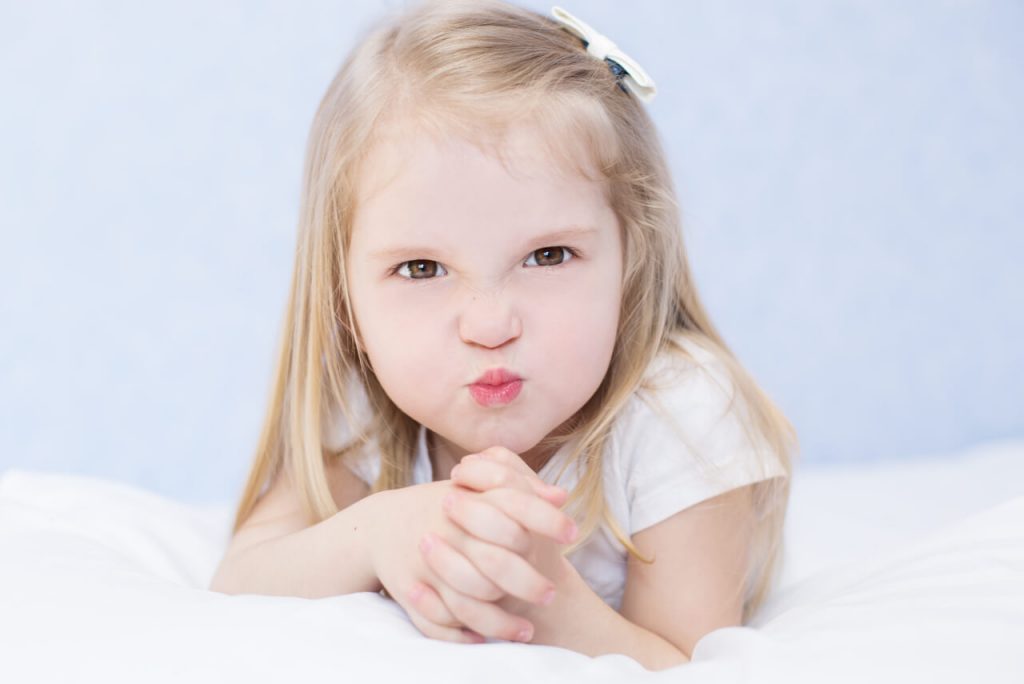 OK, let me clarify that: It totally is naughty in the moment and it can be so freaking hard and frustrating and potentially embarrassing…but it might not be happening for the reason you think.

The thing is, kids are rarely naughty for the sake of being naughty. They’re learning.

Sometimes they’re pushing boundaries to find out where the line is (and what your breaking point is). Sometimes they genuinely don’t know they’re acting God-awful. Sometimes they just think the naughty thing is hysterically funny, and let’s face it—impulse control is not their strong point. And sometimes they’re having big feelings but we don’t realize it because all we can think is: OMG, make the horrible behavior stop!

Kiddie emotions are tough because children don’t think like us. How can they? They don’t have the same life experiences, they haven’t made the mistakes that we’ve made and learned from, and the rules that rule their little world often seem to change at the drop of a hat.

Unfortunately, I forget this all the time, usually with my 6-year-old. For the past few weeks, though, it’s been my toddler.

Since she’s the baby of the family, it’s easy to think of her as little. But she’s not. First of all, she’s a girl, and forgive me for stereotyping here, but girls really are on a whole different maturity track than boys of the same age. This kid is still 2, but she desperately craves independence and she can eye-roll with the best of them. She also knows and absorbs a lot more than I sometimes give her credit for. Plus, I’m still saying she’s 2, but she’s going to turn 3 in less than a month, which puts her right on the cusp of those REALLY BIG emotions.

I had to take a deep breath and remember that she wasn’t just being naughty. Well, she was, but not without a good reason.

Anyway, summer is finally here, and I’ve been so excited to do more with both of the kids together, now that my oldest is on break. Time to make those delicious summer memories as a family! (Spoiler alert: It’s not going quite as I’d hoped.) During the school year, my daughter and I were together all day long while my son was at school, and as a result, we got to explore our new-ish area together. We’d done things that I thought he’d really enjoy, and I wanted to include him in those experiences.

First up: Making a return trip to Croton Gorge Park, which is this gorgeous dam on the Hudson River about 30 minutes from where we live. My daughter and I had hiked the two-mile trail about a month ago, and at the time, we talked about bringing her brother to join us the next time around. Before that happened, the two of us hiked elsewhere. We’d walk hand-in-hand up and down the trails, we’d talk, and she was a perfect angel. She even complained that our next mile-long hike wasn’t long enough, so it’s safe to say that she was enjoying these little adventures.

So…I decided to make good on that promise to go back with her big brother. It was a gorgeous day, and things started out great. My son was excited to see the waterfall, and my daughter was thrilled to be chasing after her big brother. They were even holding hands as they started exploring together. (Look at the adorable photographic evidence below!) But things went downhill, so to speak, as soon as we started up the trail. 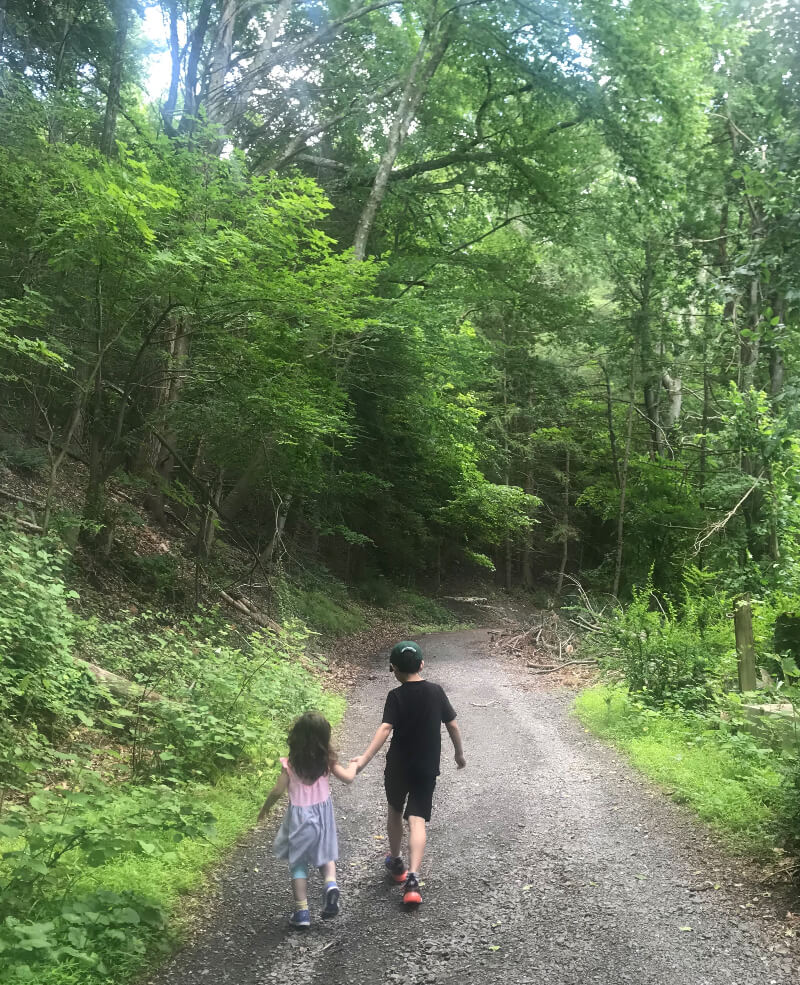 We got about a quarter mile in when my daughter suddenly didn’t want to walk anymore. She wanted me to carry her. What? We had a mile and three quarters left to go and she’s 30 pounds! There was no way I was schlepping this kid up the damn trail! But that’s exactly what I did until my back started aching. When I put her down, she lingered behind and refused to walk. Let’s just say I got a good workout that day.

When I was complaining about the episode to my mother later that day, she shed a little light on the episode: “I think she was upset because this is something you do just with her, and she didn’t like that it wasn’t just the two of you anymore.”

But she loved her brother, and she loved that he was there at first—and really loved playing American Ninja Warrior with him when they got down to the playground at the end.

But she’s 2. Emotions are big and weird and don’t always make sense.

I talked about it with her that night, and sure enough, that was the issue.

Suddenly, all of these “special” things that my toddler had thought of as hers were being taken away, being shared without her permission. And we all know how toddlers generally feel about sharing.

You’d think I would have learned from this, but nope, I found myself in the same situation a week later at the grocery store. Again, this was not something I expected. Despite the fact that she occasionally can’t contain her excitement to see the lobsters and has to run over to see them immediately, she’s generally an excellent little helper on our weekly shopping excursions, especially lately.

Not the other day. As soon as the three of us walked into the store, my little angel turned into a hell beast. She wouldn’t get in the cart, and she wouldn’t walk beside me. Instead, she seemed like a toddler possessed, running not only away from me but straight for the sliding glass doors and the parking lot. Then she was grabbing my hair, pulling it over my eyes, and laughing maniacally. And she was pushing her brother in the aisles when he tried to reason with her.

READ  Even on the Bad Days, It's Still Good

We had a lot of serious talks during this little shopping expedition—and my son was being so good and trying to help me rein her in—but overall, it was just awful.

I called my mom again, and she said pretty much the same thing that she’d said to me after the hiking escapade.

“But it’s grocery shopping!” I exclaimed through gritted teeth.

“Yes, but it’s something you generally do just with her.”

And again, that was it. Suddenly, all of these “special” things that my toddler had thought of as hers were being taken away, being shared without her permission. And we all know how toddlers generally feel about sharing. But at the same time, she loved being with her brother, so this was all confusing.

I had to take a deep breath and remember that she wasn’t just being naughty. Well, she was, but not without a good reason. She was trying to communicate with me in the best way that she could—in her toddler way. I just wasn’t understanding what she was trying to tell me.

I don’t think there’s a big, magical answer to this right now and I know that she won’t feel this way forever, so I’ve just adjusted our plans with this in mind. We went to a wonderful nature center and playground—new to all of us—and to the pool, which is something we’re all used to doing together. And yep, there were those magical summer memories!

OK, so I’m going to have to get a little more creative this summer…and maybe pawn off the grocery shopping on my husband for the time being. Also, big brother will be in camp for a few weeks, starting today, so the toddler will have me all to herself—and she couldn’t be happier.

Tell Us: What surprises you about your kids and how they see the world?