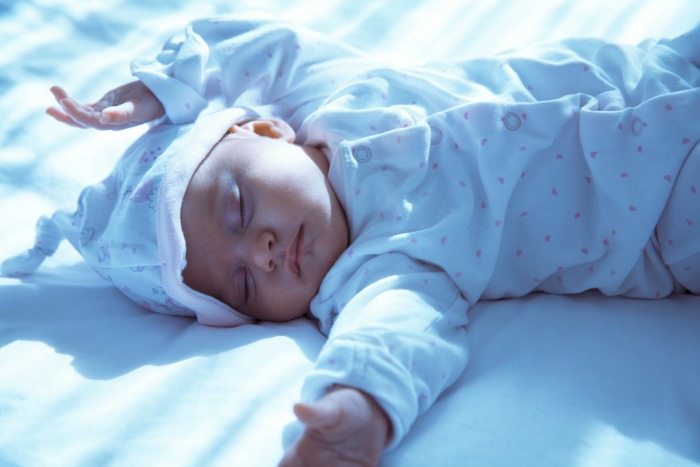 “Listen, and understand! That Terminator is out there! It can’t be bargained with. It can’t be reasoned with. It doesn’t feel pity, or remorse, or fear. And it will absolutely not stop, ever, until you are dead.”

Is it too dramatic to compare my 8-month-old to the Terminator?

Honest question. I haven’t slept in 8 months and can’t tell.

But seriously: Replace the last clause with “until it is cuddling happily in your arms,” and I’m pretty sure that’s accurate. Except, of course, my daughter is beautiful and normally happy and very squishy and cuddly and not a robot from the future or a sociopath.

But right now, it kind of feels like she’s trying to kill me. Because. She. Does. Not. Sleep.

I realize that this is mostly my fault. With my firstborn, we were all about the routine from the start, and it was great until his teeth started coming in and it all imploded. But we had a few really good months in there.

With my daughter? Mayhem from Day 1. For starters, she isn’t the only kid who needs my attention, so her napping and bedtime schedules have been inconsistent. She also has a serious case of FOMO, because we are all apparently just that exciting. And at night, I have taken the path of least resistance because I want to be semi-functional the next day. So I pick her up as soon as she cries and nurse her back to sleep, usually falling asleep with her that way. It’s a vicious (but admittedly sweet) cycle.

See also  Friends, We Need to Sleep! (And Here's How I'm Doing It)

Another problem: She’s still sleeping in our room. Yes, at 8 months. I know, I know. But she and my son will be sharing a room, and I have been terrified that he’ll try to “help.” You know: She’s cold, so I’ll give her a (suffocating) blanket. She’s bored, so I’ll give her a (choking-hazard of a) toy. She’s lonely, so I’ll pick her up (even though Mom said not to).

But I am tired. Ridiculously, mind-numbingly tired.

So on Wednesday night, after many discussions with the 4-year-old about baby safety, I decided to put them in the room together. I was nervous, but with my trusty split-screen video monitor in hand, I heated up some dinner and settled in with my laptop.

Anyway…I know that I only tried for one night, but I was feeling pretty despondent about the whole situation by mid-morning. And that’s when I saw what I think is the beginning of a tooth. So…maybe it’s not going to be like this every single night? And maybe I haven’t ruined her forever by screwing up the past 8 months?

See also  11 Ways to Annoy Your Toddler for the Holidays

A tooth! Maybe it was a tooth that wreaked havoc on our night!

That said, I could have been hallucinating from the sleep deprivation. Only time will tell!

Update: The jury’s still out about the tooth, but last night, she actually slept in her crib for a solid five-hour stretch and then again intermittently for the rest of the night. It’ll probably all go to hell tonight, but for now…progress!

Tell Us: How did you get your kids to sleep well at night?