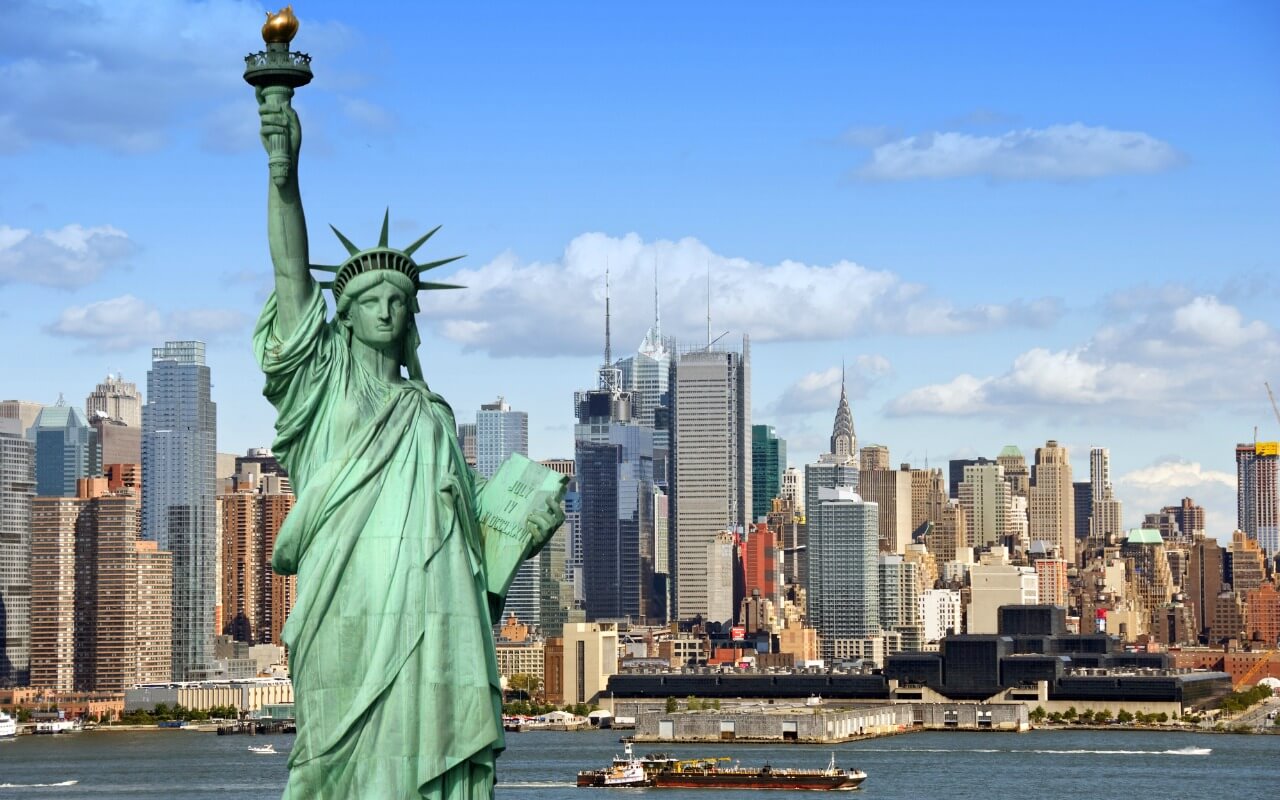 Yes, you heard me right: New York City is THE BEST place to raise young kids.

OK, fine, I may be slightly biased, since I chose to raise my family here for the past five and a half years. And I also may slightly wistful for my wonderful city life because we just moved to the ‘burbs. (Um, holy crap!) But that doesn’t mean it’s not true.

Non–city dwellers have always been fascinated that I didn’t pack it in and head straight to suburbia the second those little lines on the stick turned pink. And women starting to think about the whole kid thing often look at me hopefully when they hear my story: They really didn’t have to move out of the city if they decided to start family? Nope! Have a kid and stay for a while. Heck, stay forever, if you can!

Let me say it one more time: New York City is THE BEST place to raise young kids.

Oh, sure, you may eventually want more space. You may worry about the schools (though there are some awesome public ones, depending on your neighborhood, and we happened to get into one of them). And if you rent like we did, you might not want to feel like you’re literally lighting buckets of money on fire every month.

But I am so incredibly happy that we made the choice to live here for five and a half years of my son’s life and almost two years of my daughter’s. My kids are proud city kids, and I am a proud city mom—and we always will be.

So, why is living in New York City so great? I’m so happy you asked! Here are 32 reasons I think that it’s the best place for when you’re starting a family (and beyond)….

• You don’t have to worry about getting one or more kids in and out of car seats just to grab some milk.

• Speaking of that milk, you can always find it at late at night and within a two-block radius of your apartment. I love you, bodegas, and I will miss you more than I can adequately express!

• The parks literally become your backyard. For us, it was Central Park, which was just a block away and absolutely incredible.

• You can leave the house for short periods of time without much fuss, which means that you’re always around other people. As a result, you feel like you’re connected, even if you’re barely getting out of the house in those early, stressful days of motherhood.

• The Museum of Natural History (or the Met or the Guggenheim) can be your home away from home. We lived just nine blocks from the museum, so we were there all the time. It gave me an excuse to get out of the house on the coldest or the most sweltering of days, and we could go for a quick, educational, sanity-saving hour. (P.S.—Get the yearly membership. It’s the best deal on the planet.) 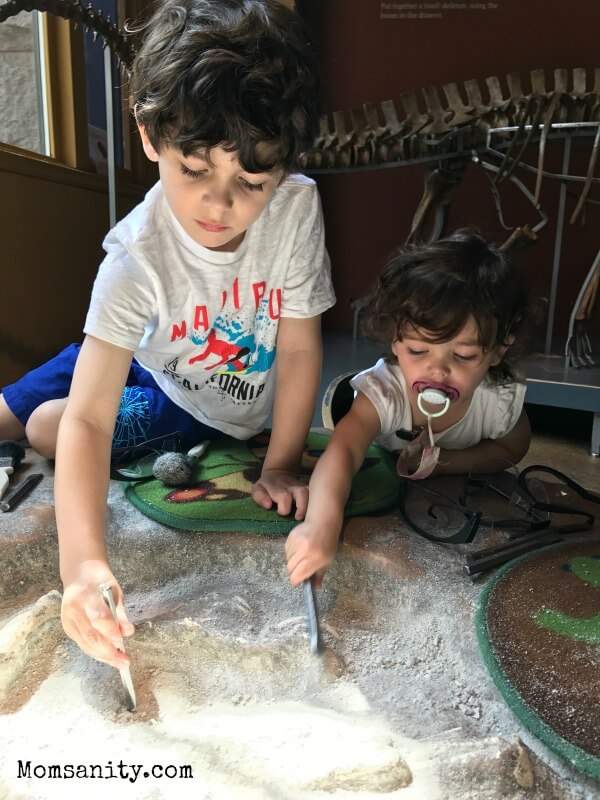 • My kids learned how to walk under the big blue whale at the Museum of Natural History. (Seriously, how cool is that?) And when my son was 2, he had to visit the fourth floor every time we were there to say hi to the T-Rex, or “Rexxie,” as he called him.

• You can get food delivered at any hour of the day or night.

• You walk everywhere, so you’re always exercising, even if you don’t realize it. That means you can lose the baby weight that much faster and stay in shape that much easier.

• Babies are incredibly transportable in strollers and baby carriers, and you don’t have to do any switcheroos with a sleeping child after getting out of a car.

• Plus, second babies are so easy to handle and take along for the ride (or, usually, the walk) with the older one. My daughter was toted to her older brother’s preschool every day in my trusty Ergo carrier. That was especially handy since her nap times were usually right smack in the middle of drop-off and pick-up. So she’d cuddle into me, close her eyes and drift off into dreamland. 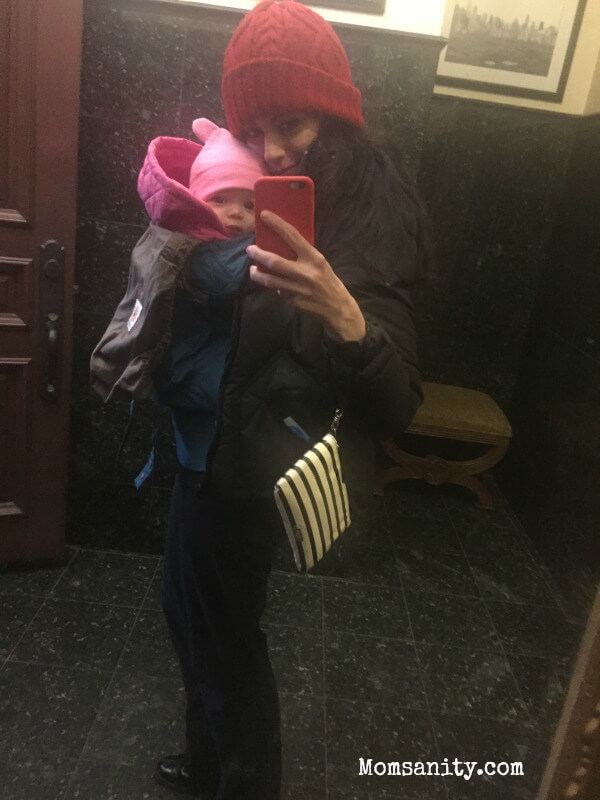 • You can leave your apartment looking like a total train wreck and no one will bat an eye. This is handy after you’ve been up all night with a nursing infant and need to walk the dog at an ungodly hour…and don’t have time to brush your hair, put on concealer or change out of your plaid pajama pants and mismatched fluffy socks.

• You and your significant other can spend more time with the kids because your commute is so short. Plus, you can get home quickly in case of an emergency, which was always one of my big fears. (We only had one big emergency, thank God, and I was so grateful that I could get to my son quickly.)

• You can go out to dinner with your kids at a ridiculously good restaurant (that also serves chicken fingers!), have a cocktail or two, and then walk home.

• Your daily life is Instagram-worthy…but it’s just your life and you often don’t even realize how awesome it is. (Until you’re in the suburbs. Sob!)

• You get culture in New York City like nowhere else—the shows, the free concerts and activities in the parks, the museums, and just walking past Lincoln Center or eating an ice cream cone by the fountain.

• There’s always a new art installation somewhere, often on a random block, so the kids are being exposed to art constantly. Recently, there was Fearless Girl downtown, the enormous ballerina in Rockefeller Center, and a big dancing hippo sculpture across the street from Lincoln Center. 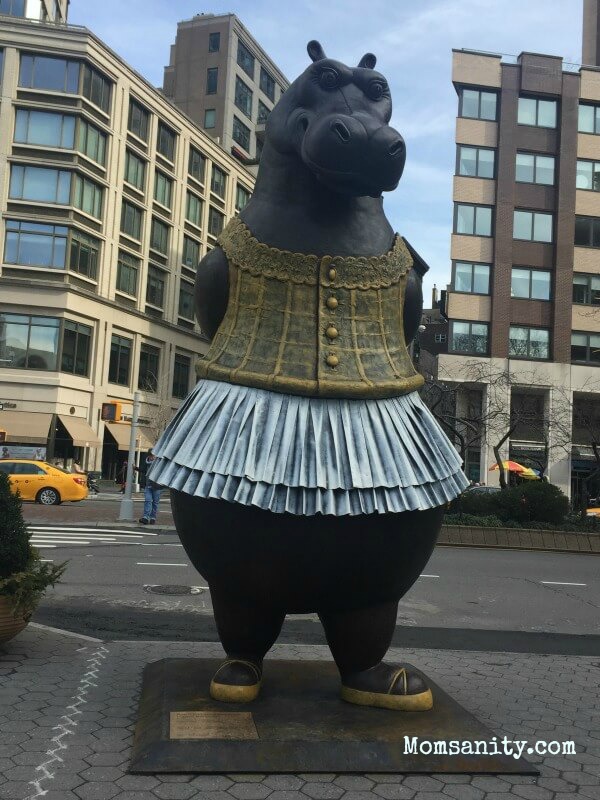 • Diversity is around your kids all the time, and the fact that people are different is just a given to them. That goes for race, religion, sexual orientation and whatever else. That’s a pretty important gift in this day and age (even though, of course, you still have to have the important conversations with them about this). To me, this is one of the biggest selling points in terms of raising kids here.

• New York City can seem big and overwhelming to people who don’t live here…but the people who do realize that each community is small and tightly knit.

• When you live in an apartment, you can always keep an eye on your kids, no matter where you all are in said apartment.

• You generally don’t have to worry about stairs, unless you live in a duplex or a brownstone—in which case, lucky you! Don’t complain and happily buy those baby gates!

• Pools and beaches are overrated when you have small children who can’t swim and who tend to wander off. Sprinkler parks are much more manageable. Plus, check out the backdrop of this secret splash pad at the Hayden Planetarium. It doesn’t get much better than that! 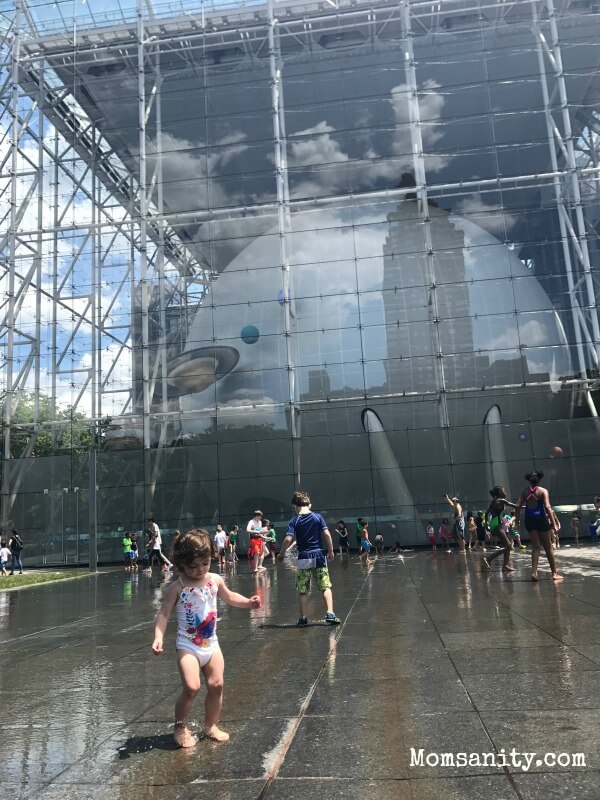 • The energy in the city is electrifying and addictive, as is the frenetic pace. Weirdly, though, you can stay happily in your little mommy bubble, even in the middle of the insanity.

• The city is centrally located, so it’s easy to escape and enjoy nature and other suburban attractions in Long Island, New Jersey and Westchester.

• You can get anywhere in the city by subway. I will admit, there is one drawback: Not many stations have elevators, and lugging a kid and a stroller up a flight (or two) of stairs is not easy. For that reason, I’d usually take a subway to the closest stop with an elevator, then walk the rest of the way. Or, if we didn’t need to walk much once we got to our destination, I’d use a carrier for the baby/toddler—and have the tightest grip ever on my older child. Problem solved!

• Plus, trains are fun! Well, for kids, anyway. For adults, they have a dank urine smell, crazy people who talk to themselves and tracks that your kids may be too curious about. But try to look at it through your kids’ eyes and it’ll seem a lot less worrisome.

• Ordinary city backdrops look like movie sets. Case in point: The picture below was taken in Central Park’s Sheep’s Meadow, just a few blocks from our apartment. 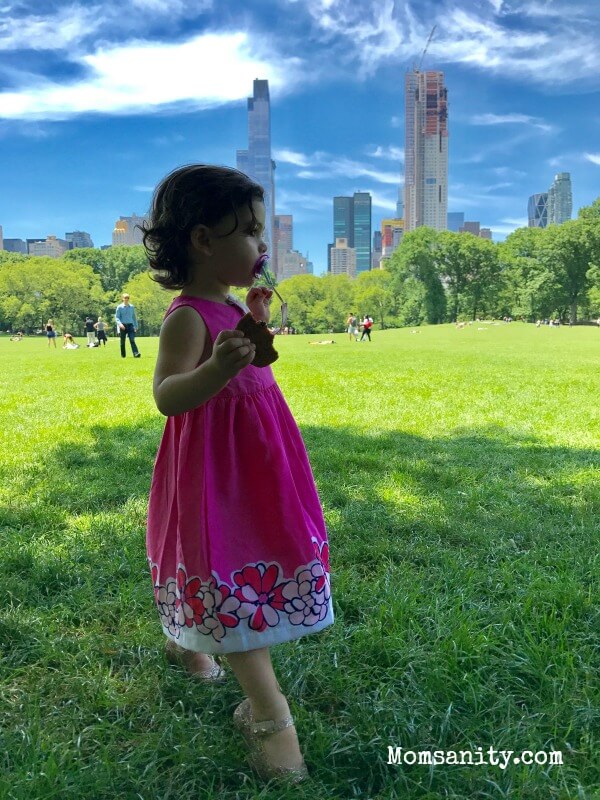 • Your kids learn street smarts—fast. They have to because you’re walking everywhere with them, and they have to stop at each and every light. City drivers are no joke, and after a scare (and a scream) or two, they get the seriousness of it pretty damn quickly.

• New Yorkers may get a bad rap, but honestly, they’re great in so many ways. And I’m not just saying that because I am one. They may talk tough, but they’re teddy bears at heart. And the ones who aren’t and who don’t hold the door for you when you have a stroller, well, we’ll tell them where they can go.

• You are in the center of it all, and you don’t feel like you have to watch from the sidelines just because you’re a mom. Equally awesome? Your kids are right there in the mix with you, too.

• You may be the furthest thing from cool with your overstuffed diaper bag and your sensible shoes as you sing “Wheels on the Bus” to calm a screaming baby, but you are surrounded by cool, so you are cool by association. Sort of.

• Everyone wants to visit New York City—and for good reason—and you live there.

• New York City is cool and fun and awesome and truly the greatest city on earth. Period.

Tell Us: What do you love about where you’ve chosen to raise your kids? 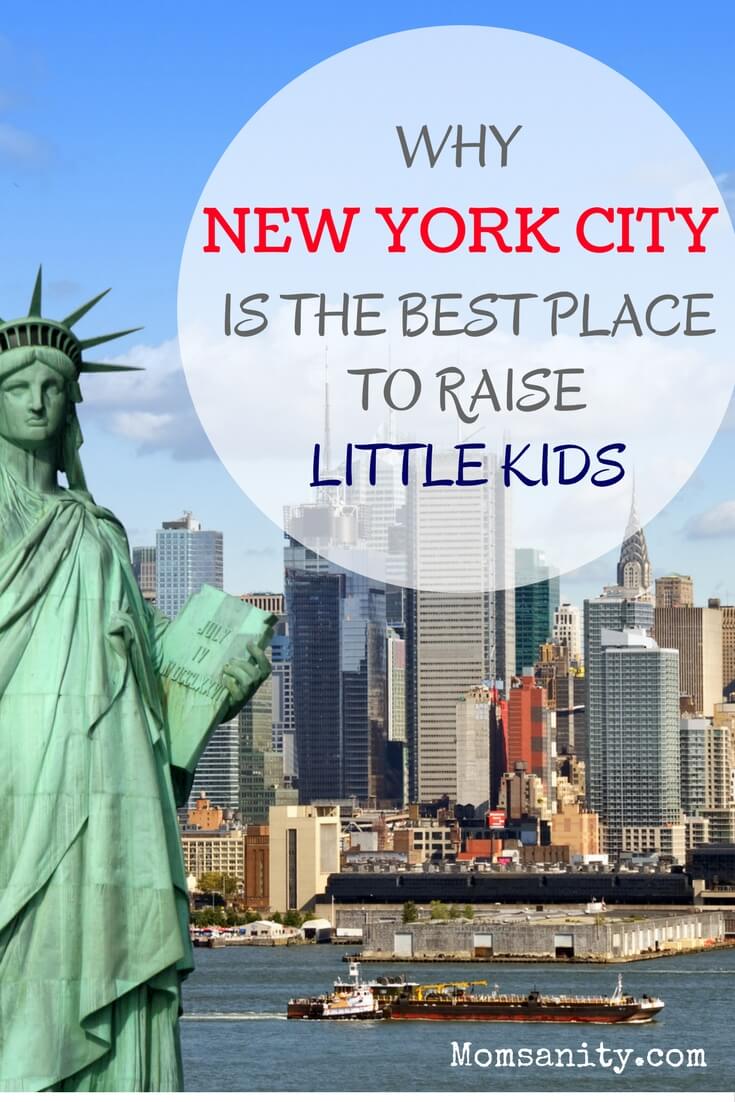