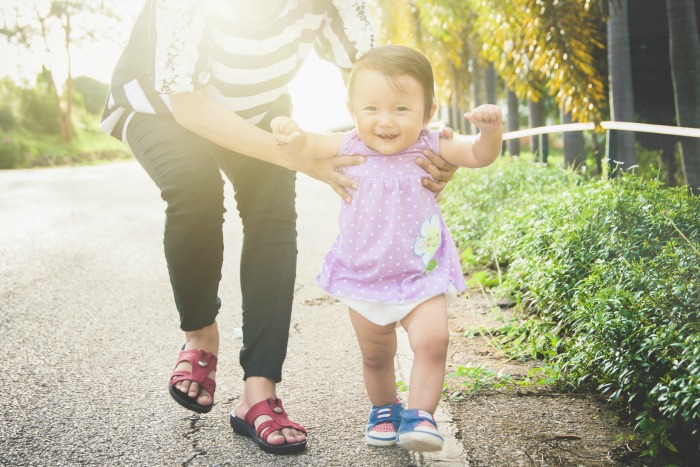 I recently asked the moms on my Facebook page how much longer I could refer to my baby as my baby. When my daughter hit the 11-month mark, I started to get e-mails from baby companies saying that toddlerhood was here, and I balked, saying that it was absolutely not and that I wanted them to shut their dirty mouths.

I was kidding…sort of. My baby girl has always had quite the independent streak, but now, fresh off of her 1st birthday, she’s acting like a full-blown toddler.

For starters, she’s toddling all over the damn place. She started taking her first unassisted steps when she was just 10 months old, in an apparent effort to catch up to her big brother. Then a week after her birthday, she hung out with a whole bunch of big kids for a few hours and decided to ditch crawling altogether. Walking was apparently the only way to go from there on in.

And it doesn’t stop there.

She thinks she’s a big girl in every way. Like the other day, when we were at a friend’s house and she was trying to walk up and down these two steps in the living room. (Yes, walk, not crawl, mind you.) He lent her a hand as she practiced the first time. Then the second time. By the third time, she had gotten the hang of it, so she pushed his hand aside and did it all by herself. Proudly.

After that? She climbed “The Pyramid of Death” at the local playground. OK, fine, it’s just a tall wooden pyramid with slides, and it’s perfectly acceptable for kids to play on…when they’re not barely 1. I tried to distract her with other things nearby, but she wouldn’t have any of it. She kept going back to the pyramid, so I finally consented, partly because resistance seemed futile and partly because I wanted to see just how far she would go.

With my hand an inch from her tush the whole time just in case, I followed her as she climbed the whole thing, not once wavering. I suppose I should be happy that she was so sturdy, but we all know that she could have just as easily gotten distracted by something, stood up and toppled over.

Remember that moment in the original Ghostbusters when we learn that Sigourney Weaver’s character is possessed? “There is no Dana. Only Zuul.” Yeah, that’s what my daughter sounds like when she wants something and I’m not giving it to her.

To say that she’s persistent is an understatement. When she wants something, her chatty, high little voice goes three octaves down and has demon-like intensity. Remember that moment in the original Ghostbusters when we learn that Sigourney Weaver’s character is possessed? “There is no Dana. Only Zuul.” Yeah, that’s what my daughter sounds like when she wants something and I’m not giving it to her. It’s a little jarring if you’re not expecting it. And really, when are you expecting that from a 19-pound, angelic-looking baby with dimples?

Which brings me to her opinions. As I’ve said before, I love opinions—and I think it’s especially important for girls to have strong opinions in this messed-up world of ours. But toddler opinions are different than normal-person opinions. For starters, they often come with a complete disregard for personal safety (yours, theirs, the dog’s). Even when that’s not the case, you can’t decide if you want to laugh or cry as your precious child, for the 23rd time in an hour, comes perilously close to attempting an Olympics-style dismount off the couch or gleefully sinks her teeth into your shoulder because it makes her giggle.

I have no freaking clue, but say a little prayer for me!

Tell Us: What was the first full-blown toddler behavior that your kids embraced?