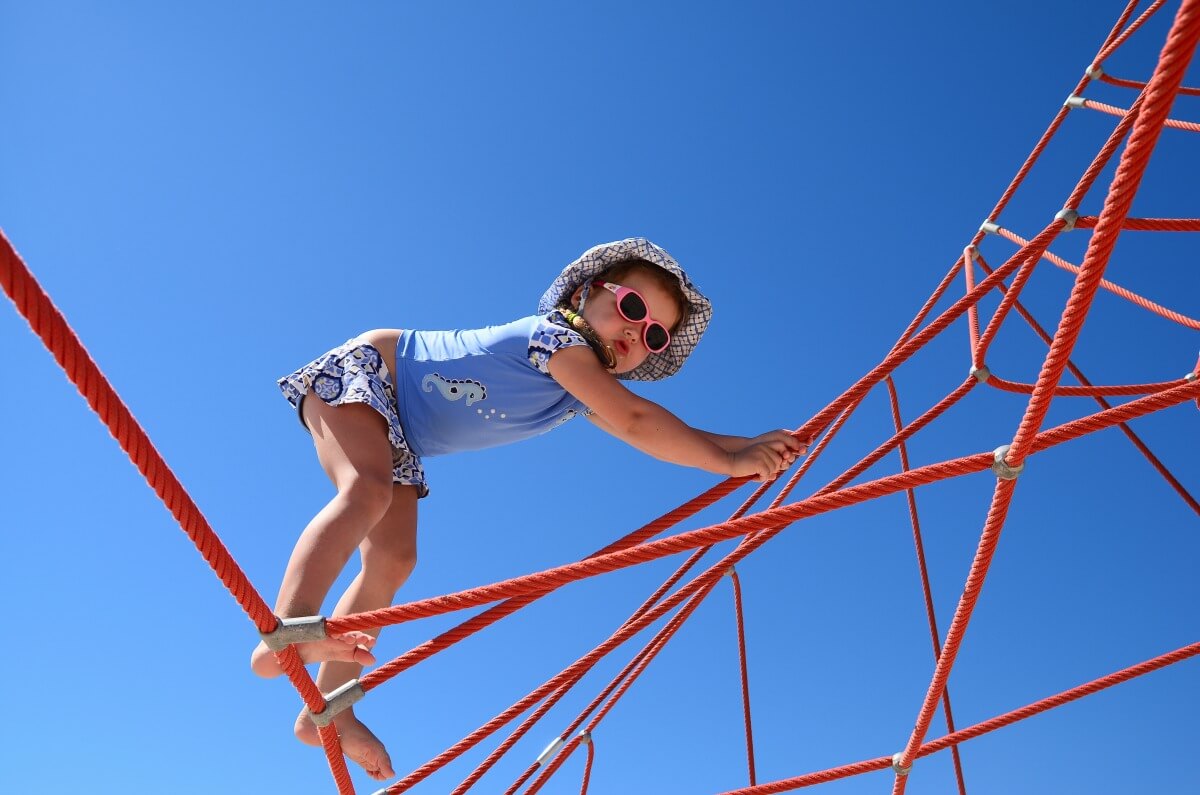 You know how you learned all about defensive driving in Driver’s Ed? It’s super important and you use it every time you’re in a car, right? Right.

Then why the heck doesn’t anyone teach moms about defensive toddlering? It’s another essential, life-or-death skill.

Yes, defensive toddlering. Because toddlers are always doing something dangerous, death-defying and disturbing. And in response, moms are always cringing and trying to keep them out of the nearest emergency room.

Don’t get me wrong—infants are challenging in their own right. They don’t have the wherewithal to control their little bodies, and even before they start crawling over to non-babyproofed areas (with incredible alacrity for someone who can barely hold a spoon), they can inflict untold damage upon themselves and/or you in a split second. After all, what mom hasn’t thought that her nose wasn’t broken after an overenthusiastic baby laugh-and-lunge?

But all the talk about how “it gets easier when they get older” is a lie. At least when it comes to taking your toddler out of the house and letting him loose on the world. I’m not sure if other parents tell you that it gets easier because they don’t want to scare the living daylights out of you or because they’ve blocked out the entire second year of their children’s lives. But the truth is, it’s terrifying. Each and every one of those 2-year-olds is trying desperately to separate from their parents and to push the boundaries of their independence—in a frighteningly literal way—and nothing about any of that is easy.

I realized just how bad things had gotten this weekend when I took my son to the park. We live in New York City, so Central Park is literally our backyard. Very cool…but very crowded late in the afternoon on the first nice day of spring. And my 2-year-old wanted to be right in the middle of it all.

Here’s a little sampling of what happened…

• I had to stop my intrepid little man from running straight into groups of 185-pound twentysomethings throwing footballs, kicking around soccer balls, hurling frisbees and almost accidentally trampling him in the process. He pouted and couldn’t understand why I wouldn’t let him join in the fun. After all, he’s a big boy, too.

• He made a beeline for a colorful kite—straight through unsuspecting picnickers and sunbathers. He managed to avoid most of the people, though he did stumble over a few blanket edges. And when he stumbles, he’s always only seconds away from impaling himself on an errant stick or concussing himself with a large rock. Ah, nature.

• Speaking of nature, thanks for the bird poop, geese! When he was with Daddy the day before on the very same open stretch of lawn, the toddler picked it up. With me, thankfully he just stepped on it. Now, I’m well aware that toddlers can be disgusting, but still…ick.

• Squirrels are evil little bastards, and in the city, they get way too close to people. The 2-year-old decided one of them would be fun to chase…up a hill…down a hill…then under a tree with low, eye-poking-level branches. When the squirrel escaped through a fence, the toddler discovered the bounciness of the branches. Up, down and up again, almost scarring his chubby little cheeks with every springy bounce. Of course I ended taking a branch to the face at the end of this little experiment.

• He thought I was a mean mommy because I wouldn’t let him dive into the pond lined with large rocks and filled with the murky water.

• At the playground, he wanted to go across the ricketiest-looking play bridge, get precariously close to edges bordering 10-foot drops, and climb up the highest slides. (I have a debilitating fear of heights, so traipsing up and down these death traps with him, always an arm’s length away, is really fun for me.)

• He’s tall for his age, so he can pull himself up onto high concrete structures meant for older kids to climb on. So he did…and then attempted to run along the narrow balance-beam-like ledges. Attempts to hold his hand and get him to walk carefully were met with: “No, Mommy! Stop it!” As was almost everything else.

• We ventured over to an area with old-school rollerskaters. Always a sight, and he loved it, so of course he wanted to stand at the entrance to get an unobscured look, right in the way of people careening by insanely fast on eight small wheels. I had to stroller- and body-block him for 15 solid minutes until I was able to direct him behind a fence, where he (finally) happily danced along to the music.

See also  Why Toddlers Are the Smartest People on the Planet

• Next up: Encountering a bunch of skateboarders skating and flipping and otherwise attempting bodily injury. The toddler didn’t understand why he couldn’t get really, really close to observe their tricks. As I held his hand and tried to get him to watch from the sidelines, he did the classic toddler move: He arched his back violently and attempted to throw himself on the concrete, repeatedly and headfirst. Because somehow hurting himself is going to convince me to let him put him in the line of danger…so that he can hurt himself some more and, you know, worse.

Headfirst seems to be the key with everything. And of course, his head is the thing I most want to protect. Just a few weeks ago, he accidentally catapulted that good-sized noggin into a wall—a wall!—while he was bouncing on a squishy, child-safe mat at the Children’s Museum. I was sure he’d knocked out all of his front teeth, but thankfully he somehow escaped with only a slight bloody abrasion under his nose.

I don’t want to quash his exuberance, his excitement, his fearlessness. But he has no idea what it is to get really hurt, what will happen when Mommy’s kiss on the boo-boo won’t fix everything. I try to tell him to be careful, that he can get hurt, but he doesn’t understand what that means. Not really. Oh, who am I kidding? He doesn’t understand it at all. I wish he never had to learn that, but I know he does. (Preferably in a very academic setting and not after a trip to the hospital.)

Until it absolutely has to happen, though, I will be doing my best to fling myself into the path of those footballs, skateboards and other potential instruments of death so that they hit me instead of him. Because that’s what mommies do.

Tell Us: What mind-bogglingly dangerous things does your child do on a daily basis?