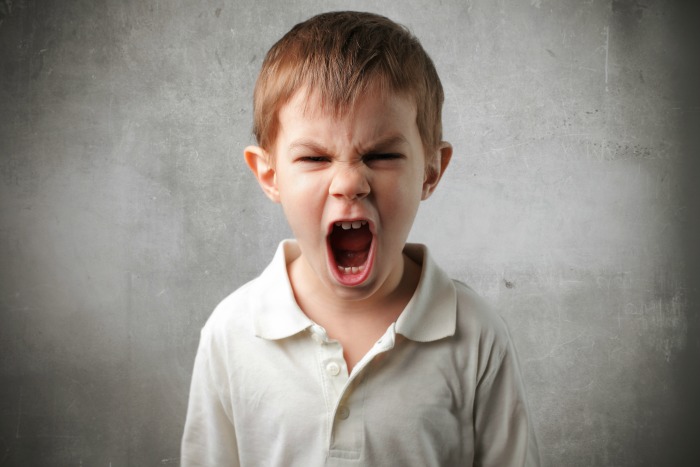 I love my son with every fiber of my being. I consider how nearly every single one of my actions will impact him. I would give my life for him in a millisecond, without a second thought.

The thing is, he’s usually super sweet, incredibly empathetic and oddly reasonable. But 4. Oy, 4. It has been one helluva year. He’s been pushing boundaries and asserting his independence. And that’s all fine and good and developmentally healthy, which I say to convince myself—er, remind myself.

But then there are those times when his will is magnified by 100, for any number of reasons. It feels like he’s literally trying to drive me crazy, and maybe he is, just to see what will happen. I try to make the right choices—the calm choices—and I often do. But sometimes…sometimes…

When I have one of those not-so-ideal parenting nights, like I did earlier this week, I feel pretty terrible about it the next day. Who doesn’t? No one wants to yell at their kids and butt heads in a completely unproductive way. Plus, they’re kids, and we’re adults. We’re supposed to be calming them down and providing those wonderful teachable moments that we read about in parenting manuals. But in the moment—and especially if we’ve been having a rough day—buttons can get pushed and that adult/child line can get weirdly blurred.

Luckily, all is not lost, and there is a silver lining: the next day.

That next day is a new day, after all. It’s time to do better, to start over, to fix what went wrong the night before.

I know that I’m not alone in this parenting challenge, so hopefully my process will help you, too. Here’s what I do in the aftermath of a blowout with my preschooler that makes things a whole lot better—right then and in the long run as well.

Acknowledge what went wrong.
Your child’s behavior didn’t happen in a vacuum. Nine times out of 10, you made a choice that affected the situation negatively or let it escalate. Was he hungry and you didn’t realize it? Did he have a conflict with a friend or sibling earlier in the day? Is he worried about something? Did you keep him up way past his bedtime so you could do something fun? (That was my sin this week, FYI.) Whatever it is, acknowledge it, own your part in it, and learn from the mistake.

Kids are kids, and they push back against us sometimes. … It’s how we deal with it in the moment and in the moments afterward that matters.

Get some perspective.
What happened wasn’t the end of the world. Really. Yes, it may have been bad, but again, it wasn’t apocalypse bad. Kids are kids, and they push back against us sometimes. It’s how they learn about themselves and the world around them. It’s how we deal with it in the moment and in the moments afterward that matters.

Let him experience a mini consequence of his behavior.
If things were really bad, I will say no to playing with him for a little while. I’m not doing it as a punishment, per se, but if everything goes back to normal ASAP, he might think that his disrespectful behavior was no big deal. (Plus, sometimes I really need to cool down.) Still, I make it clear to him that my love for him is unconditional, even though I’m angry and need to cool down. I’ll say: “Buddy, Mommy always loves you, no matter what, but I’m very upset by what happened and I don’t want to play with you right now. You know how you don’t want to play with a friend when they’ve been mean to you? Well, I feel the same way right now. Again, I love you, but I need a little space.” I want him to know that in a healthy relationship, you can’t use someone as a punching bag (literally or figuratively) and expect a cursory “I’m sorry” to make it all OK right away.

Remember why your kid is awesome.
When we take those breaks from each other, I’m still watching him, just at a little bit of a distance. The other day, my son pouted for a bit that I wouldn’t play with him, but then he moved on and started playing on his own. He stood up on a kitchen chair, directed his little sister to play the drums (after “tuning” his imaginary orchestra) and then started conducting her. I found myself smiling, my heart swelling and every bit of me falling in love with him all over again.

Talk to your child.
You need to be calm, and you both need to be in the right head space. So if your child is still digging his feet in and saying no to everything? You’ll probably want to wait a bit. When the time is right, talk through what happened and why it was unacceptable, and then—most important—talk about why it happened. I’ll usually ask: “Why did that upset you so much?” or “Was that what was really bothering you, or was it something else?” I’ve been doing this with my son since he could talk, and it’s been enlightening. He’s surprised me more than once with an answer I didn’t expect. As I’ve learned, you really never know till you ask.

Forgive him.
He’s a kid. This should go without saying, right? It does to a certain degree, but look, we’re human. We get angry, we feel hurt, and it’s hard not to take some of the meanness and anger personally when it’s directed (and hurled and catapulted) at you, the person who does everything for him. But he’s a baby—your baby—and it’s your job to mend what’s broken between the two of you and teach him how to do better.

I should have stayed calmer and done things differently. This is basic parenting; I know this, so why didn’t I do it? Because I’m human and I’m still learning, too.

Forgive yourself.
This is a biggie, and it’s so hard. The moments when you’ve lost your cool can make you feel feel like the worst parent in the world and the biggest failure. You know the drill: My child is acting like this, and he should know better because I’ve raised him better. So why is he being so willfully disobedient and so awful? Because he’s a kid and he’s learning. OK, fine, but I should have stayed calmer and done things differently. This is basic parenting; I know this, so why didn’t I do it? Because I’m human and I’m still learning, too. Forgive yourself. You will do better next time.

Be friends again—for real.
Once the dust has settled and you’ve apologized to each other, it’s time to kiss, make up, and do something together. I’ll always do whatever he suggests at this point, because I want us to start on the right foot and I want him to feel good about the way we’ve resolved the issue. This post-argument play is the best because we’re both rediscovering what makes us happy as a duo. We’re also lighter and finally able to have some serious fun.

Escape.
Later that day, when all is well, the hurt has healed and your child is happily snuggled in his bed, take some time for yourself. Whether it’s for a cocktail with a friend, a pedicure in the peace and quiet, or just a walk in the fresh air, get the hell out of the house. When you walk out the door, you might wonder if you’ll ever come back, but you will. I promise. And you’ll feel a lot different and a lot more grounded when you do.

Tell Us: What do you do in the aftermath of a kiddie argument? 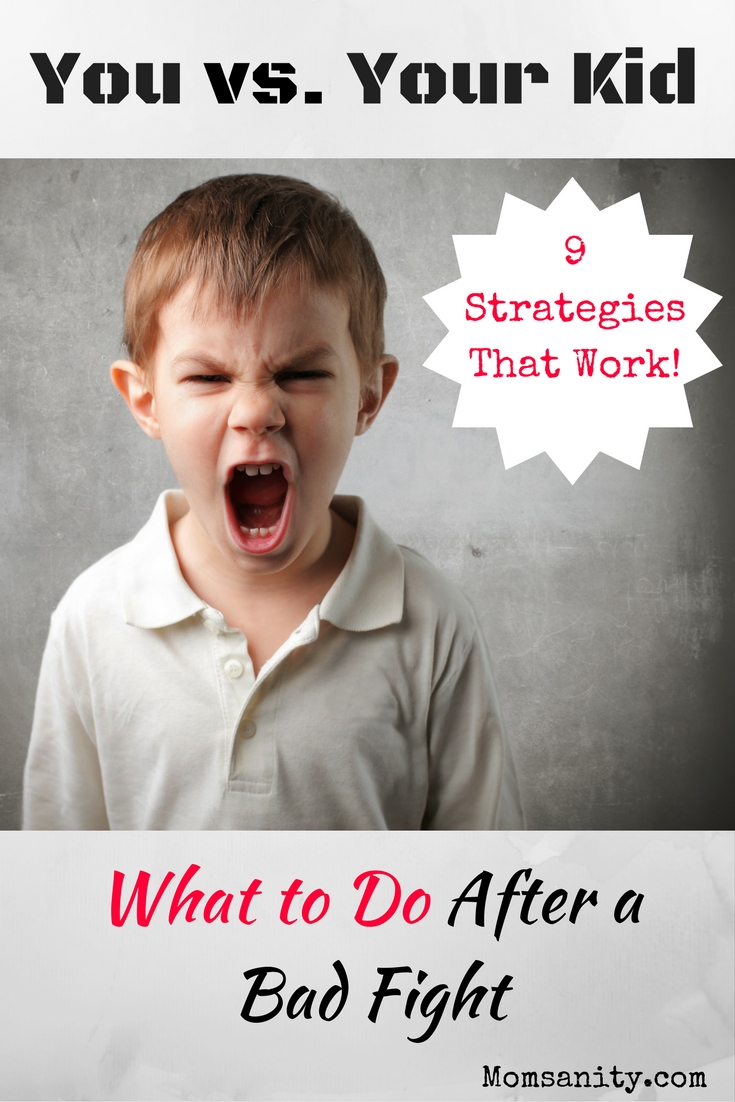