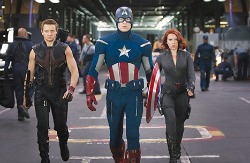 Well, I was going to put up a sweet, silly, little post about my pregnancy this morning, but my plans got derailed last night while scrolling through my Twitter feed. (Obviously the root of all evil.)

That’s because I came across the now-infamous interview with Jeremy Renner and Chris Evans, who were doing a press junket for Avengers: Age of Ultron. If you haven’t seen it yet, the female host asks the dynamic duo how they feel about the fact that Scarlett Johannson’s character, Black Widow, chooses the Hulk over Hawkeye and Captain America as her love interest. Here was their subsequently delightful banter…

Chris Evans (after a huge laugh): “I was going to say something along that line. She’s a complete whore.”

Interviewer: “Whatever movie it is, she’ll just be the sidekick. She’ll be flirting.”

Where, oh, where do I even start?

How about here: Are you freaking kidding me?

To say that I’m disappointed by these two is a massive understatement. While I may have rolled my eyes a little at Jeremy Renner’s initial statement, especially after his smarmy comment to J.Lo at the Golden Globes about her golden globes, I was horrified to see Chris Evans jumping on the proverbial bandwagon and joining in the degrading locker-room talk. After all, he was just the PR world’s golden boy, along with Chris Pratt, visiting sick kids in the hospital after their Super Bowl bet. That was good, clean fun. This, however, is not. This is misogyny, plain and simple, and it’s not funny.

I can already anticipate the arguments that are going to be thrown my way:

See also  My Toddler and the Vacuum: A Love Story

It was an offhand joke. You’re being ridiculously sensitive!

The world is too politically correct. Can’t anyone say anything anymore?

They were talking about a fictional character, for crying out loud!

They were tired after a long press junket. They didn’t mean anything by it.

They’ve already apologized. Get over it.

The host was a woman. She didn’t see anything wrong with this type of joking around and even added to it with her sidekick comment.

Well, I don’t give a damn about any of that. Here’s why—and why what they said matters: Because young kids are listening to it.

Think about the lack of female superheroes on the big screen, and you’ll see the problem. The last prominent and successful female superhero in a leading role was arguably Wonder Woman—on TV in the 1970s!—and while the women in X-Men were great, they either occupied supporting roles or turned evil. Elektra and Catwoman were flops, not because female characters aren’t attractive to moviegoers but because the scripts were terrible. The same could be said of a bunch of male-driven superhero movies (George Clooney in Batman & Robin and Ben Affleck in Daredevil, I’m looking at you), but they’ve been given more chances to succeed, even though statistics show that 47 percent of comic fans are female.

Girls need strong role models to look up to—and they want them. TV has been a great place for this; just look at Buffy and the Charmed sisters. But while we’ve got plenty of paranormal heroines, we’re sorely lacking them in the superhero department, especially in mainstream movies. The Black Widow character is a good start: Sure, she uses her sexuality as a weapon, but she’ll also calmly and coolly kick anyone’s ass, male or female. And the really crappy, disheartening takeaway from Renner and Evans’s comments is this: No matter how powerful, smart, strong, sexy and independent a woman is, if she doesn’t do something that a man wants, she will still be considered “a slut” and she’ll be relegated to a secondary role.

If that’s not misogyny and sexism, I don’t know what is.

Given the fact that women still aren’t treated equally to men in the workplace, that rape culture is prevalent on campuses across the nation, that women are harassed on the streets on a daily basis and told to smile and get over it, that feminism is considered a dirty word, and that we are still fighting every day to be taken seriously and to be seen for more than our bodies…well, it’s a problem. A big one.

I have little girl on the way and an impressionable 3-year-old boy in my house, and the message at the heart of that interview is not one that I want sent to either of them. And yes, that message is equally damaging to boys, who are hearing Hawkeye and Captain America call a woman—their colleague in the superhero world, mind you—a whore.

So, to Jeremy Renner and Chris Evans, I say this: Shame on you. You may just be actors, but you’re in the public eye, and kids look up to you and listen to you. You know that. So the next time you open your traps, remember the wise words said in Spider-Man: With great power comes great responsibility. Do better next time, boys. Just do better.

Tell Us: What do you think of these two actors acting like anything but superheroes?