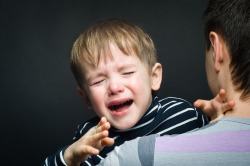 My husband is suddenly The Toddler Whisperer.

As in, he’s gotten our 2-year-old to bed in seven minutes or less every night for the past two weeks. I don’t know if I want to throw him a parade or throw something heavy at his head.

Because I’m not having any luck with bedtime these days, and I used to be really good at it. Like, really, really good. And my husband? Well, let’s just say that he wasn’t as good.

I know it’s not a competition. I know it’s wonderful and important for them to have this kind of time together. And I know it’s good that the toddler is in bed and sleeping, no matter how he gets that way. Also, when my husband does it, I have time to make dinner. And do work. And tweet. (What? That’s important, too.)

For the last two years, my son and I have done our little bedtime dance. Bedtime dances, I should say, because they’re ever-evolving. I tended to put him to bed most nights, and on the ones when the hubby was doing it and it wasn’t going well, I’d assess and analyze: “You didn’t sing ‘Row, Row’ six times and then quietly hum it for another three? Oh, that’s the problem.” Or: “No, for the new routine, read Edward the Emu first, not last, because he gets too excited about Edward and Edwina getting together at the end. God’s Dream should be last. Remember?” And so on and so forth.

I’d read a bunch of get-your-kid-to-bed books early on, and I knew the importance of the routine at bedtime. That little nugget of advice had been burned into my sleep-deprived brain. A baby needed a predictable bedtime routine, and no matter how crazy it was, you stuck with it. If not, you were screwed for life. Or at least for the foreseeable future.

Yeah, it’s never quite seemed to fully work for us. There are just too many variables. So I let it evolve over time, but I was still always successful at a reasonable hour most nights.

Lately, when it’s time for lights-out, he asks for one more book, one more song, one more trip to the potty. He protests when I turn out the light, makes his body as stiff as a board when I try to put him in his crib and starts jumping on his mattress like it’s a trampoline. As the grand finale, he throws his pacifier at me as I try to swiftly and quietly creep out of the room, then starts screaming. (Sound familiar, Honest Toddler?)

All that said, I know that I should be grateful for the reprieve when my husband achieves baby-bedtime bliss—and I really am and know how necessary it is, for a variety of reasons, to fully share parenting duties—but I also feel like I’m failing in some monumental mom way.

And there it is. Mommy failure, Mommy guilt. (I know, I know—when did this become all about me?)

When my husband emerges from the room, he’s self-satisfied but actually not at all smug, which makes me feel even worse. He’s happy to have done it, he’s happy to have given me the time to myself, and he wants to move on to the relaxing portion of the night…but I want details.

“What did you do in there? Which books did you read to him? Did you stand up while singing to him or cuddle him in the rocking chair? When exactly did you turn out the light—after the songs, between them, what?”

I must sound like a lunatic, because he pretty much looks at me like I’m a lunatic as I let out an exasperated sigh and let out a strangled “I can’t believe you got him to bed so quickly! I’m so frustrated!”

At which point he tells me that the kiddo just wants to be with Mommy. And I realize this…to a point. If I’m nearby when my husband tries to take him into the bedroom, he’ll reach over my poor husband’s shoulder like a drowning man reaching for a life preserver and dramatically cry, “Mommy! Mommy! Mommmmmmmyyyyyy!!!”

At least that’s what I like to tell myself.

Tell Us: What are your tricks for a successful bedtime routine? And who’s better at laying down the law—you or your significant other?