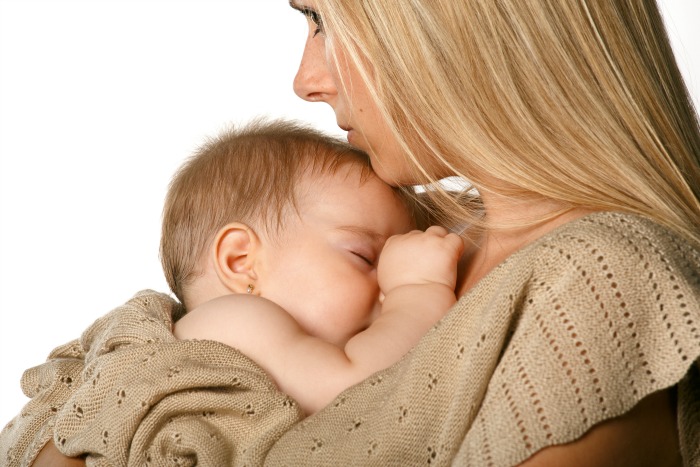 My postpartum body is amazing.

No, I haven’t lost all of the baby weight, and it seems like it’s going to be more of a struggle this time around. (Thanks, second baby and advanced maternal age!)

And I’m not talking about breastfeeding, even though I do think it’s pretty badass that I actually produce food.

No, what I’m talking about is the sheer amazingness of skin-to-skin contact. It is so magical and so wonderful, and yes, I totally sound like I’m high because that’s what it honest-to-God feels like. And I’m kicking myself for not doing more of it with my newborn once we left the hospital.

My life has been so frenetic since this poor kid was born eight weeks ago, and I’ve been feeling guilty about that as well as overwhelmed with the amount of crap I need to do. So last Saturday, I asked my husband to take our 3-year-old to the park while the baby was sleeping so I could get some stuff done. Yeah, you can imagine how that went.

The baby decided to boycott her regularly scheduled nap, so the laundry stayed unfolded, the house stayed messy, the writing stayed unwritten and I stayed unshowered. That last bit had to change, though, because, frankly, it had been a few days, and more important, we were seeing people who showered regularly later that afternoon and I wanted to be semi-presentable.

When I finally managed to get the baby to sleep, I jumped in the shower, and, of course, she started crying almost immediately. Sigh.

See also  The Four Little Words That Can Change Your Life

I rushed through my shower to pick her up, but she wouldn’t go back down and she wouldn’t be soothed just by rocking. That’s when I decided to employ my superpower: Mommy’s Magical Boobies, as my husband and I had nicknamed them back when my son was little.

Fresh out of the shower, I was still in a towel, and she was just in a diaper once I took her out of her swaddle. We plopped down on the couch, I popped her on a boob and the crying stopped immediately. When she was done, she cuddled up on my chest as she always does, but this time there was no barrier between us, not even a thin piece of fabric.

And I took a breath. A deep, calming, present breath.

The frenetic thoughts were silenced, and I just stopped. It was just me and her against the world, and my heart felt like it was going to burst.

The frenetic thoughts were silenced, and I just stopped. It was just me and her against the world, and my heart felt like it was going to burst. Even when the boys returned home, we stayed in our little mommy-baby bubble. Nothing was getting through it and nothing fazed me—not the Tasmanian Devil running circles around us or the fact that his dad gave him the iPad for an ungodly long time shortly thereafter.

With my son, I pretty much walked around topless for the first month of his life. For starters, I had read a ton about kangaroo care. All of that skin-to-skin cuddling releases oxytocin in both you and baby, and it promotes attachment, decreases stress (and even the potential for postpartum depression) and just makes everything better. This works even if you’re formula-feeding and also for dads.

But past that, as a first-time mom, I’d also been having a hard time with breastfeeding. I couldn’t be bothered to keep unhooking my bra and lifting up my shirt because he wanted to be attached to me at all times—and I was just too damn uncoordinated to do it gracefully. My solution? I just left it all off.

With my daughter, though, I’m an old pro at breastfeeding, and baby and I are both very efficient. Maybe too efficient, because we get the job done quickly. It’s great because then I can tend to my 3-year-old and shuttle him around town, and of course, I’m not struggling or in pain like the first time around. But on the flip side, I’ve been missing out this amazing bonding time, and I didn’t even realize it.

Well, now I do, and that’s why I’m making a vow to go topless as much as possible for the next two weeks. (At home, people. I’m not freeing the nipple that much.) I’ve only got a little time left in this magical phase, and I’m not going to squander it, no matter how much laundry there is to fold.

Tell Us: What made you slow down as a new mom and helped you bond with your baby?