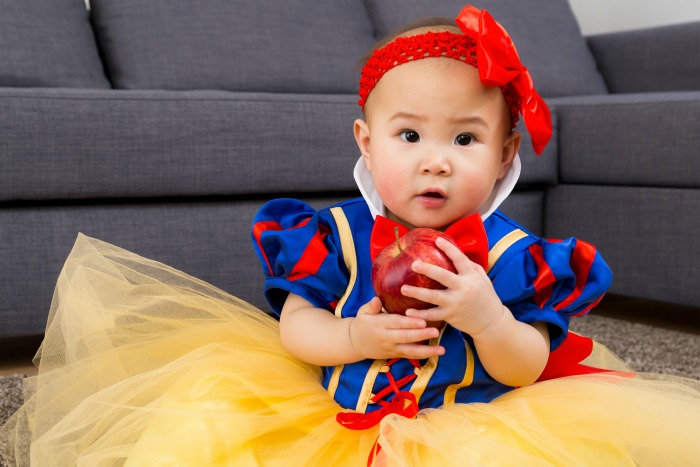 The whole dead-mother thing in Disney movies has been discussed before, but since becoming a mom and watching this stuff with my toddler, it just seems so much worse. Now, I understand that moms need to be removed from the equation in these movies because moms protect their children under any circumstances—come hell, high water or evil queens—and then there’d be no story.

But it’s only the tip of the iceberg. These movies really seem to be playing on every woman’s worst fears and insecurities about motherhood. Not only fears about leaving your kids if you die, but how you’d even raise them properly if you didn’t.

As I watched Frozen six times in one week recently (I was sick, don’t judge), I realized that the fear mongering is even in there. And I love the lessons in that movie, overall. Still, I found something unsettling. And here it is, along with 8 other movie messages that scare the living daylights out of me as a parent.

FROZEN
If I die, my kid will have debilitating abandonment issues. Poor Anna just wants to be loved—so badly, in fact, that she’s ready to jump into bed with literally the first guy who walks along. And poor Elsa, whose parents have already screwed her up with their well-meaning directives not to feel, is so frightened that she never leaves her room and is barely able to function. I seriously no longer worry about my own death in terms of me being, you know, dead, but in terms of how it’ll affect my kids. That weirds me out on a variety of levels.

FINDING NEMO
We can never really protect our kids. Nemo’s dad is right there—right there!—and Nemo is still kidnapped. Er, fishnapped. Sure, Nemo’s dad was a helicopter parent and that caused the little orange guy to rebel, but still, the one time he did, look what happened! This makes me never want to let my kid to ride a bike or walk to school by himself—or not keep a death grip on his hand when we’re walking down the street. (Oh, and shout-out to Nemo’s dead mom.)
[Editor’s note: Yes, this is a Pixar movie…but Pixar is now owned by Disney. With the gorgeous graphics, Nemo’s dead mom and a few other terrifying themes I’ve included below, it fits right in.]

SNOW WHITE AND THE SEVEN DWARVES
When he starts dating, my son will fall in love for all of the wrong reasons. Yes, it’s great that Prince Charming saves Snow White’s life and all, but why does he fall in love with her in the first place? Because she’s pretty. What’s more, he thought she was pretty and kissed her when he thought she was dead. Ew. If he thought she was just unconscious? Also really, really bad. And don’t give me any crap about how he saw the beauty in her soul and felt compelled to honor that. Yeah, right.

THE LITTLE MERMAID
My child will hate the very core of who she is. In your eyes, your child is perfect…but she really and truly hates herself. The way she looks, the place she lives, the very essence of what it means to be her. For crying out loud, she doesn’t even want to be the same species anymore! And she has really great hair and can’t even see past her self-loathing to realize it.

CINDERELLA
If I do end up dying, my husband will marry an evil woman…and then he’ll die, so my kid will raised by said evil woman. When watching this movie, I sometimes get caught up in the shoes—oooh, sparkly and pretty!—but there are many more sinister things at play here, of course, with Cinderella’s indentured servitude. While I realize that I am irreplaceable (ahem), I’m praying to God that if I meet an untimely end, my husband will have at least a little sense and not screw things up this badly.

BEAUTY AND THE BEAST
My child will end up in an unhealthy relationship. Ah, bad boys. How women love them. And look—as Belle proves, a good woman can change the most beastly of them into a good man, right? No, no, NO! This is the classic ruse that women start believing young and something that screws us up well into our dating years, until we (hopefully, finally, God-willing) realize that people don’t change so we should ditch the jerks and find a truly good guy.

WALL-E
We are literally ruining the world for our kids. Without getting all Al Gore here, we are destroying the environment. And the English language. And television. And pop culture. And everything else. I’m pretty sure every generation feels this way, but still, it just seems worse to me. Maybe (probably) because my kid’s the one in potential jeopardy.

DUMBO
Bullies will torment my sweet, sensitive baby. At least the mom gets to live in this one—even if she’s locked up and deemed crazy for most of the story—but poor Dumbo is still alone and has to fend for himself. He’s mocked, he’s exploited, he’s depressed, and he even gets drunk, which is accidental but still ends up helping him cope (not a good path to be on, Dumbo). All is well in the end when his uniqueness finally ends up getting rewarded, but is that kind of fame what he really wants in his life? Deep questions for Dumbo, I know. These movies are going to drive me to drink, I swear.

MONSTERS, INC.
My son will follow the monsters. I’m talking literally here. If monsters are real and ever jump out of my 2-year-old’s closet, he will giggle, squeal in delight and attempt to play with them. Then there are the real-life monsters, who I can barely think about without feeling like I’m going to be physically ill. I can only hope and pray that I can keep him safe, that I put my trust in the right people and that I teach him well enough to know the good guys from the bad guys. Not an easy task, but that’s why moms try to be the real heroes each and every day, I suppose.

Tell Us: Which kiddie cartoons do you find a little unsettling, and why?