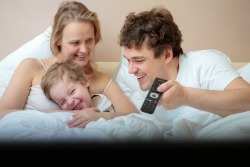 Sometime during the first month of motherhood, you realize a distressing, inconvenient truth: Now that you’re a mom, you will never get a day off. Ever. Not unless you literally run away with your girlfriends or significant other for a weekend. But even then, the worry switch is still on and problems are just a phone call away.

That said, when you’re physically present with your child, you need to be mentally present, too, or you feel like a bad parent. Plus, all hell tends to break loose.

But this past Saturday, I was in desperate need of a little downtime, and I couldn’t figure out how to get it. The husband was out of town for the weekend. We had just seen the grandparents the day before. And it was too late to call a babysitter. I was on my own, and there was no way around it.

The problem was twofold: First, I’m 32 weeks pregnant. And second, I had kept my pregnant self and my 3-year-old out way too late the night before—like, midnight late. (I know, I know.) But we were having fun with friends and family out in the ’burbs…and  I kind of forgot about our hourlong drive home. It was that first summer event, something I always stumble over, like forgetting to slather yourself with enough sunscreen on that first warm day or not bringing a towel to the sprinkler park when it first opens.

The next day, we were both wrecked. We slept till 9, which was as delightful as it sounds, and stayed in our jammies till noon, but even after that, we were still tired. The last thing I wanted to do was go to a bustling museum. And we live in the city, so it’s not like I could just open the door and let my kid run around in the backyard. A trip to the park would entail a walk, stuff for me to schlep, sun in my tired eyes and lots of activity. No, thanks.

So, what’s the best thing to do on a truly lazy, exhausted day? Watch movies!

The only problem is that my son is 3, and TV is supposed to rot his brain and all. Yeah, if you know me or if you’ve been on this site before, you know that I don’t really believe that. I think that pop culture is healthy in moderation…but I wasn’t really interested in moderation that day. But still it was just one day….

I know what some people will say: Suck it up! You’re supposed to give your child real-world experiences and hands-on learning. You won’t be making meaningful memories by watching TV!

To that, I say: Again, it’s just one day. And also, that’s not necessarily true. Especially if you’re not sticking the kid in a room by himself and letting the TV do the literal babysitting.

I have lots of wonderful family memories as a kid having to do with activities—my parents were super-hands-on, and we went on a ton of little family field trips—and also lots having to do with us hanging out at home together. Yes, there were the board games and the lasagna-making, but there was also the TV- and movie-watching. Maybe it was more quaint back then because there weren’t five gazillion channels, but let’s be real: It was what it was.

I remember my dad taking me to see Star Wars in the movie theater when I was just 2 years old. I remember being educated on the sci-fi classics like original Star Trek and The Twilight Zone. I remember getting our very first VCR and taping Dragonslayer and Michael Jackson’s “Thriller” video. I remember bingeing on Saturday-morning cartoons while cuddled on the couch. I remember watching V as a family on Sunday nights after I took a shower. (OK, so we were a slightly quirky family, but it worked for us.)

Yes, it’s scandalous that some of my favorite memories involve TV shows and movies…but it can’t be too bad considering I’ve made a career out of it. I’m an actor. I was an entertainment-news spokesperson for years. And I am constantly making pop-culture jokes in my writing.

So…one day of movies isn’t going to be the worst thing in the world for my son, is it? Especially since he’s been begging me to see Ghostbusters. I mean, how could I say no to that?

Tell Us: What do you occasionally do with your kids that you’re not “supposed to” do?