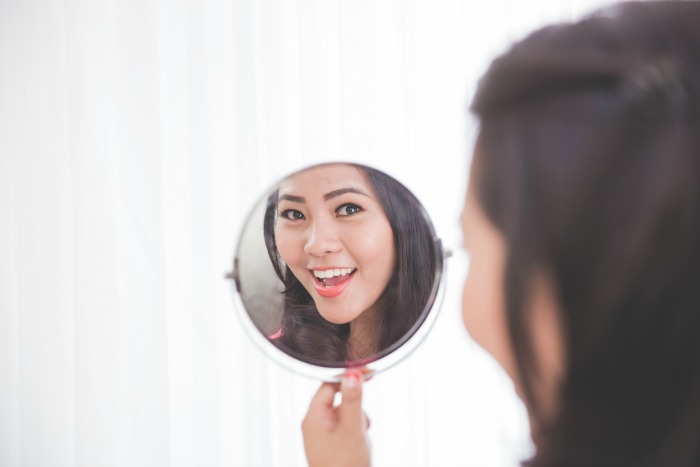 About eight weeks after I had my son, I emerged from my new-mom cocoon…and I needed a haircut. Desperately. So I pried myself away from my little boy and headed downtown.

Afterward, I looked like I had just stepped out of a salon, because, well, I had. But the real thing that put a little pep in my step was that I was heading home to see my little man. It was the longest I’d ever been away from him at that point, and I couldn’t wait to see him.

And that’s when a cute guy with a sexy accent of indeterminate European origin approached me.

I was a little confused at first. I thought he was asking for directions or needed my help with something, but then I realized that he was hitting on me. As he spoke, I stared at him like a deer in headlights, and then I blurted: “I just had a baby!”

Not: “I’m married,” or “I’m not interested.” No, I just had a baby. That’s literally the only thing that was going through my mind at the time. I was a mom, and I was so not interested in anything beyond motherhood right then. Couldn’t he see that?

No, apparently he didn’t see the invisible “mom” tattoo on my forehead.

It was such an eye opener for me, though. I mean, I was still me—a woman with a variety of facets, just as I’d always been. Sure, I was a mom now, but I was also still a sexual being, wasn’t I? And a professional one. And a fun one. And an interesting one. But “mom” suddenly trumped all of that, at least in those early postpartum days.

Even after three and a half years, it still does in many ways, and it’s weird. I would be the first person to call out a man on buying into the delightfully termed Madonna-whore complex. For crying out loud, I used to write a sex column for a men’s magazine. But there I was, putting myself into the proverbial Madonna box…as non-virginal as it may have been.

Something was missing from me, even if I hadn’t been aware of it that day and even if I’m not aware of it on a daily basis now with another newborn. But when do moms start to feel whole again—like themselves again?

It got me thinking, and not just about sex. (Sorry, honey.) We’re more than just moms, right? Something was missing from me, even if I hadn’t been aware of it that day and even if I’m not aware of it on a daily basis now with another newborn. But when do moms start to feel whole again—like themselves again?

Being a new mom is confusing—mentally and physically—and you have to acknowledge that. For starters, we’ve got all of these hormones swirling around, a biological imperative that makes us not eat our young, I suppose. It’s dizzying and exciting and has a weird flush of new romance. You only have eyes for that baby.

And then there’s the fact that there’s a helluva lot else on your mind. Like that baby has to be fed every two hours. And you haven’t gotten four hours of consecutive sleep in months. And showering seems optional and way too exhausting on most days. And none of your clothes fit properly because of the lingering baby weight. And there’s laundry to be done. And groceries to be gotten. And phone calls to return. And…well, you know the drill. You’re living it, and it’s all-consuming, especially when it’s brand new.

It’s no wonder that feeling sexy—or working on that novel or wearing something other than yoga pants or leaving the house to be a functioning member of society again—might be the farthest thing from your mind. Or at least my mind.

But I’m going to do my best to get it to the forefront of my mind, at least some of the time. After all, what would I be teaching my kids about women, motherhood and life if my life virtually stopped when they came onto the scene? And what would happen to me if I let that singular focus take over? I’m not sure, but I think it would cause a whole lot of trouble in a whole lot of ways—with my parenting, my marriage and my self-esteem.

Bottom line? I liked me before and I like me after. Now it’s time for those two people to meet. I think they’d like each other.

Tell Us: How long did it take you to get your groove back?