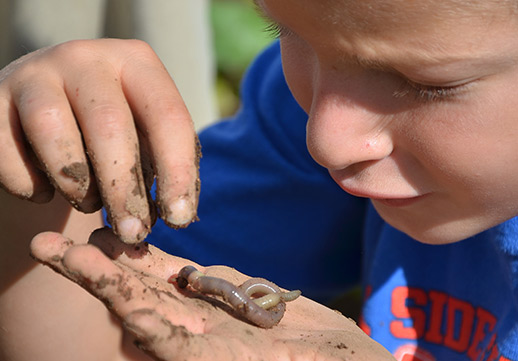 I got some really good advice recently regarding my toddler from a 10-year-old: “You have to let him touch everything, even the gross stuff, so that he learns about it.”

The gross stuff in question was a wriggling, writhing worm. And my wise little advisor, the son of an old friend, was right. But as it wriggled and writhed in his fingers and got closer and closer to my son’s face, I cringed.

As much as my feminist side hates to admit it, sometimes I can be a real girly girl. Granted, I have always had and still have the movie tastes of a 12-year-old boy with my love of Star Wars, Die Hard and Friday the 13th, but…lace curtains adorned my cotton- candy-pink room as a tween. I’ve been lusting after these satin Valentino pumps with jewel-encrusted bows for years. And I really dislike getting dirt under my nails, literally and figuratively.

That said, I’d always sworn that if I had a girl, I’d expose her to bugs and trucks and tools, traditionally boy things as well as traditionally girl things. To be honest, though— and please don’t judge me too harshly for this—I had just kind of assumed that she would shun some of grosser things of the world, like I did.

But I had a boy. A rough-and-tumble bruiser of a boy who totally threw me for a loop. It was a conscious mental hurdle for me to let him get dirty and to explore with the best of the explorers, but I made sure I did. I even signed him up for a class with the progressive, back-to-nature Forest School program this past summer, where he did get plenty dirty and loved every minute of it. While it may seem counterintuitive to pay for your child to make mudpies, splash in puddles and poke everything with a big stick—all things you can really do on your own—I wanted to make sure that I didn’t accidentally quash his creative toddler impulses with my effort to keep him nice and sanitized and away from germs and bird poop.

See also  When You're Sick, Are You the Worst Mom...Or the Best?

Which brings us back to the worm. I had to let go. My kid was going to play with bugs at some point—I certainly did back in the day, despite my girly-girl tendencies—so I nodded to the 10-year-old and let him hand over the worm. My son stared at it, fascinated, as he held it between his fingers and touched its slimy length with his other hand.

And then there were two worms. One in each of his hands. Wait, what?

After about 10 seconds of examining it like a scientist, my son had suddenly and brutally (and accidentally) dissected the worm, and it was now in two separate pieces. Still moving.

“Oh, my God! He killed the worm!” screeched the 10-year-old, incredulously, before breaking out into hysterical laughter.

OK, nature lesson over. Cue the disposal of the worm, a discussion about needing to be really gentle and the race inside to wash hands.

Again, ew. But at least I caught him before he tried to eat it.

TELL US: What’s the grossest thing your child has done so far? And how did you react?