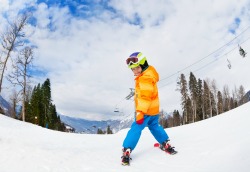 I wrote this two weeks ago when I was in Colorado. What took me so long to post it? Combine the vacation time with a much-worried-about solo flight with my son, getting back to the daily grind, a sick dog and a 3-year-old with the stomach flu, and things got…postponed.

But it seemed like the perfect post for the Northeast’s (hopefully) last snow day. And I didn’t want to abandon it altogether because kids just amaze me sometimes, and, well, the whole thing just makes me smile….

Is it possible to die from cuteness? Because I really think that my heart might break into a million pieces right now. And if not that, then it’s going to explode from pride.

I’m watching my son, who just turned 3, ski down a bunny slope. It’s his second day of ski school, and I’m hiding behind a big blue foam structure, because if he sees me, it’ll all be over. But I really want to see how he’s doing and—maybe, just maybe—get a cute video of this moment.

Because he’s amazing. And I don’t mean his ski skills, even though they’re pretty impressive and—embarrassing truth be told—already far exceed mine. I spent my last ski lesson 15 years ago crying at the top of a very similar little hill with two of my friends who were equally terrified. Going downhill fast? Not my thing. I suppose it’s also a metaphor for how I tend to live my life. I’m more of the slow, sure and deliberating type. I rarely go hurtling headfirst into anything.

But my son? Fearless. 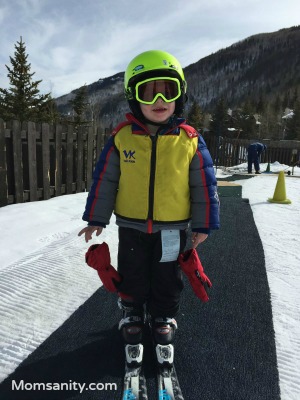 The fearless kid in the top picture isn’t mine…but this one is!

He’s always been pretty great at separation—again, far better than me. But I’d been trying to prepare him for ski school, so we’d been talking about it for months and he was ridiculously excited about it. So when we got to the little rainbow-adorned drop-off spot, he was ready.

And off he went with his instructor. His smile reached from ear to ear, his impossibly adorable dimples punctuating his happiness.

But I had somewhat expected that. It was the rest of it that I wasn’t prepared for when I peeked out from behind my hiding place. He is very athletic—again, much unlike me—and he was loving the thrill of learning a new physical skill, of feeling the rush of wind on his face, of feeling a little out of control (since stopping is not a ski skill he possesses yet). That desire to feel like that, so out of control, is so out of my comfort zone. And it’s kind of weird to see in this child who grew in my body, who has the same mess of brown curls I did as a kid and who is literally such a part of me that it sometimes physically hurts when I’m not with him. He’s me—and yet he’s so not me in some ways.

Trust me, I know that’s a good thing. It’s what I want as a mom, and that independent spirit is something I’ve been trying to encourage for the past three years. And the thing is, I can teach and I can guide, but I can’t take much credit for any of this. It’s just him. Perfect little him. And he surprises me every day in the most wonderful ways.

See also  Am I Ready for Mommyhood: The Sequel?

Tell Us: What surprises you most about your kids?