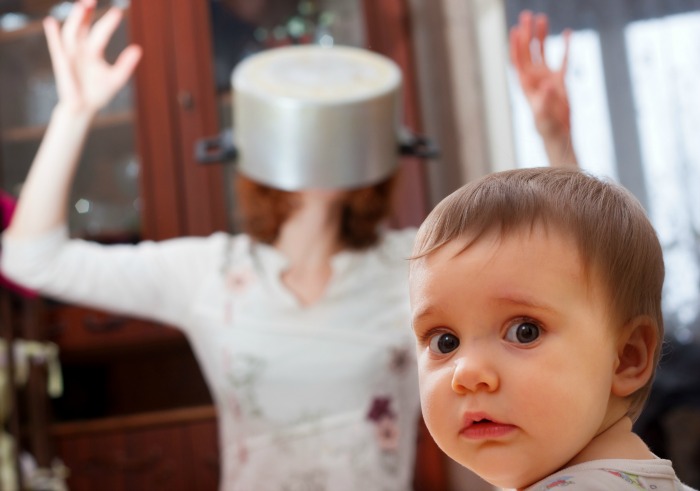 Most days, I feel like I’m doing a pretty decent job as a parent.

The kids are alive. They’ve been fed. They’re encouraged to express their individuality. They may have had a meltdown or two, but they’re generally happy. They’re relatively unscathed. (Caveat: I have a 4-year-old boy, so there’s at least one new bump and bruise per day.) There may be a few small things that bother me when I finally head to bed, but I take solace in the fact that I’ve tried my best.

You know those days when you feel like the day has been hijacked by powers beyond your control and you’re just lying in the wake of the disaster? Yeah, I’m pretty sure that’s what happened to me. It wasn’t anything huge and tragic. It was just a bunch of little things that made me feel like the worst parent ever.

It started with a baby who refused to nap and a 4-year-old who was incredibly whiny after preschool. I wanted to get home, but he wanted to eat a bagel at the cafe across the street and I didn’t have the energy to argue. One of his classmates and her babysitter were also there, so I decided to be social. The problem was that I was maybe a little too social, and the lady at the tiny table in the middle of us got caught in the conversation crossfire.

I didn’t realize it, though, until my son started getting rowdy—jumping and completely ignoring my requests to sit down. I was about to leave when another mom introduced herself. I was so excited to be suddenly having two adult conversations, I let my son’s less-than-stellar behavior go on for a little too long. I finally dragged him out of there, but not before I caught a glimpse of the poor woman with her book, breathing a sigh of relief that we were leaving.

Oh, God. I was that parent, the one giving all of us a bad name. I was mortified. Lady, if I see you again, I will buy you coffee. Or alcohol. I. Am. Sorry.

The afternoon was busy but uneventful, and after dinner, my son helped me with the dishes while the baby bounced happily in the exersaucer. She’d had a surprisingly long nap in her stroller and was in a great mood. I settled down on the couch to nurse her, and I was half-paying attention when…CHOMP.

Yes, you read that right. My teething 6-month-old bit down on my already-sore nipple with the force of a steel trap.

I did what any other mom would have done: I screamed. Loudly. Holy crap, that hurt!

My daughter just stared back at me, betrayed, hurt, confused by my reaction…and then she started wailing. The look she gave me—well, let’s just say that it’s not a look I ever want to see again on her precious little face. It took a while to calm her down, and I felt like I had emotionally hurt her in some deep, awful way.

But this is motherhood, and I couldn’t wallow until after bedtime.

To that end, I tucked my son in shortly thereafter. While we were cuddling and talking, he started to tell me that he’d been scared lately. This was it—what I’d been trying to draw out of him for the past two months. He hadn’t been his usual carefree, bubbly self, and I’d suspected the reason (my dad, who he’s very close to, had been in the hospital), but he couldn’t or wouldn’t verbalize it.

He started off by talking about how he was scared when I went to the hospital to have the baby, and then I asked him if he was also scared when Grandpa was in the hospital. He said yes and was starting to expand on the idea when I heard my husband freaking out in the other room. There was apparently poop. Lots and lots of poop.

And there was. The baby had a massive blowout while in the exersaucer (damn those things!), and there was poop all the way up her back. My husband was just standing there, paralyzed, holding our daughter like a bomb that would detonate if he moved. This was definitely a two-person job—I mean, it was everywhere—so we whisked her off to the bathroom for some emergency cleanup. By the time I got back to my son, the moment was gone.

So that sucked. Just as my sweet, sensitive child was opening up to me, I ran out of the room in a panic, essentially abandoning him. I can’t wait for that to come up in therapy someday. I tried to bring it up again the next night, but his mind was on something else.

So, just to recap: I was an accidental a-hole in public. I got bit—hard—in a terrible spot. I very possibly emotionally scarred both my kids. There was a lot of poop. And I was so tired, I didn’t even have the presence of mind to open a bottle of wine at the end of it all.

Can I get a do-over?

Tell Us: What do you on those days when everything seems to be going wrong?