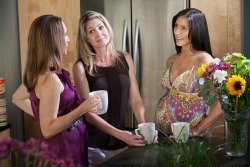 You know when you meet another mom and suddenly everything is awesome, just like in The Lego Movie? And wait—is that the sound of angels singing the “Hallelujah Chorus” that you hear?

OK, maybe I’m being a little dramatic—but really, only just a little. A good mom friend is a partner in crime, someone who truly gets it and someone who doesn’t judge you. You instantly feel better about the fact that your son won’t eat anything except beige food and that your daughter chose to repeat that word, out of all the words you’ve ever uttered, at school. Mom friends just make everything better.

That’s what it feels like when you read The Big Book of Parenting Tweets, put together by the hilarious ladies of Science of Parenthood, Norine Dworkin-McDaniel and Jessica Ziegler, and Can I Get Another Bottle of Whine’s Kate Hall. It features more than 300 tweets from fellow moms and dads you’ll instantly relate to, and it’s the perfect gift for anyone who’s a parent—including yourself, of course.

I was lucky enough to sit down with the awesome Norine Dworkin-McDaniel, my new mom crush. We chatted about the book, about getting puked on and our own parenting war stories, and about the science of making mom friends.

Dawn: I love that all of the parents in this book remind you that you’re not alone in the insanity of parenting. Is that why you decided to write it?
Norine: That’s one of the reasons. To give credit where credit is due, this book was my partner Jessica Ziegler’s idea. We had been thinking about putting together an anthology, and we wanted to do something that was in line with our brand, which is snarky humor for parents. And one of the reasons we do Science of Parenthood is that we’re parents, we’re in the trenches, and even we need reminders that there are other people out there who are going through the same stuff. It really does help to laugh about this. You know, when you’re covered in vomit, it’s helpful to know that later on, it’s going to make a funny story to tell your girlfriends.

Dawn: It’s amazing how universal so much of parenting is. Every mom will be covered in vomit in some point.
Norine: I remember the first time I was vomited on. I think my son was probably about 2, and we were about to go out for a walk in the stroller. I made one last pit stop in the bathroom, and he climbed up into my lap, put his head down on my chest—oh, isn’t he sweet?—and then he vomited all over me. No warning at all.

Dawn: Oh, I’ve been there, and it’s the worst! Here we are, bonding over vomit, and that’s not something I ever would have expected. What is the most unlikely thing you’ve bonded over with another mom?
Norine: I don’t know if it’s unlikely for moms, because like you said, in the first few years, some of these things really are universal. I don’t know a mom who hasn’t been vomited on, peed on, pooped on, just covered in some manner of noxious substance. But the thing I never thought I’d be discussing with other moms is labor and delivery stories. When I first started going to Mommy and Me, it seemed like every mom wanted to share that. If you sit still long enough on a playground, someone will come over and share their story with you.

Dawn: That’s so true. What’s that about? Is childbirth the ultimate war story?
Norine: That’s exactly what I think it is. The way that women bond is by sharing stories and seeking commonality, and if you are a mom and you delivered your own baby, that’s something you have in common with every other mother. And it doesn’t seem to matter how far away you are from your birth story. My son is going to be 9, and it’s crystal clear.

Dawn: And everyone has a weird story. The doctor on call during my son’s delivery was watching Jurassic Park between my contractions.
Norine: That is really funny. I ended up having a C-section, and they get me into the operating room, they put up the sheet and then I hear the doctor go, “Oops!” You really don’t want to hear that word when your insides are spread out all over the operating table and they’re trying to get the baby out of you. So I was like, “What do you mean oops?” He was like, “No, no, it’s fine. I’m trying to take an 8-pound baby out of a 6-pound incision. Don’t worry.” But I bet that’s one of the first things they teach you in surgeon school: Don’t say oops.

Dawn: They should add that to the curriculum if it’s not already in there. When it comes to forging a new friendship, of course there’s more to it than just that initial bonding moment. What do you think is the perfect formula for mom friendship?
Norine: It’s good chemistry. I know that I’ve met a good potential friend when you say good-bye and you still talk to each other for another 30 minutes, and then you say good-bye some more and you’re still talking because you have so much to say to each other.

Dawn: It really is just like dating. I always say that.
Norine: It is. I used to put myself out there at Target. If I saw a woman putting baby food on the checkout conveyor-belt thing, I would find a reason to just start talking to her. We moved when I was pregnant. I didn’t know anybody in this part of the world besides my sister, so I was really starting from scratch. And my son was born in 2006, and it was still really early for Facebook and there wasn’t really Twitter yet. There weren’t the social-media ways to connect. 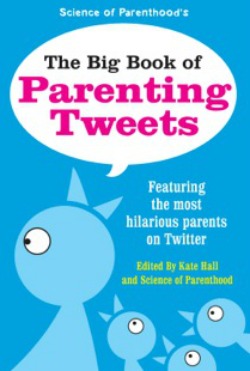 Dawn: Social media really has saved my sanity on a number of occasions, and aside from just being funny, I think that’s a really great thing about a book of tweets. I can’t ask you to pick a favorite tweet—that’s probably like asking someone to pick a favorite kid—but do you have a favorite topic?
Norine: Probably what resonates with me most is the behavioral stuff, because that’s the funny stuff I find with my son. One of my favorite tweets is from Brenna Jennings of Suburban Snapshots. She says: “My 6-year-old rolled her eyes so hard at me, I could hear it.” My kid has rolled his eyes at me, and I’ve been like, “Oh, no, you did not just do that.” Another favorite is from Bethany Thies of Bad Parenting Moments. Her 6-year-old tripped over a box of Legos and fell on 185 pieces, and she says: “I feel that’s six years of karma coming back at him.” We’ve all stepped on the Lego on bare feet, and it hurts!

Dawn: It’s basically what you talk about with your best friend, just a little more succinct and a little funnier.
Norine: Yes, and the contributors are master comedians on Twitter. They are able to distill down the moment, find the funny in it and then communicate it in a very succinct and targeted way. It’s like 100-proof laughter.

Dawn: If only every mom we met in real life were that awesome. Look, not everybody gets along. My trigger word is “should.” I hate when someone tells me what I should and shouldn’t do, especially when it comes to my kid. That’s my deal breaker. What’s yours?
Norine: I think it has to be the mom who only shows you the highlight reel. There is a particular mom friend I’m thinking about who is lovely, and I like her and her husband very much, and her children are nice…in very small doses…individually. But it’s a constant stream of: “Well, isn’t it amazing that little Kimmy did this, and we’re just so proud of her.” And it’s all the worst humblebrag except that it’s not humble. I’m sure that her children are quite lovely, but there’s nothing else to the conversation. And yeah, my kid’s fabulous, but like all kids, he can be a real little shit sometimes, too, and if you don’t own that, you’re not telling the whole truth.

Dawn: And that’s the absolute truth right there. Giving unwanted advice can also ruffle some mom feathers. How do you make sure you don’t step over that line?
Norine: I think it’s how you would be a good friend in any situation. Think about the effect your words are going to have on somebody, and if they’re not positive or helpful, think twice about whether you need to share that little nugget of advice. And the other thing is to maybe not speak when you’re angry. One time, I made a mistake with a mom and didn’t realize it. I had written something on our school’s Facebook page—angry. The topic isn’t important, but it hit one of my hot buttons. The president of the PTO was very hurt. She agreed with my position, but she felt that I should have come to her. So what I’ve learned is that if I’m feeling really angry, I shouldn’t necessarily vent it.

Dawn: It’s kind of like being upset with your kid. Take a deep breath and count to 10.
Norine: Exactly! She told me that she was hurt, I apologized profusely, and we were able to move on. I think that can be hard for a lot of people. They don’t want to say anything, so they’ll fume silently or ignore you. I think it’s best when you can get stuff out in the open, because you can disagree nicely.

Dawn: I feel like I just saw that on an episode of Daniel Tiger’s Neighborhood! You can have differences, but you can still be friends. Any final, parting thoughts before I release you back into the craziness of your life?
Norine: This book is really for anyone who is a parent or has been a parent, because it covers the span of toddler up to age 20. We have parents of tweens and teens, parents of elementary-school children, and parents of preschoolers and toddlers. We’ve also got a fair number of dads. It’s not just a mom’s book, and it’s not just a parents-of-young-children book; it really is universal.

Tell Us: What tends to be your go-to conversation starter when you meet a potential mom friend?