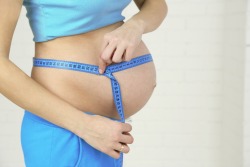 If I see one more headline talking about Jill Duggar’s “huge” baby bump, I am going to scream. The woman is five days past her due date.

Same goes for Kate Middleton, whose belly is getting “bigger than ever!”

And don’t even get me started on Global News meteorologist Kristi Gordon, who received shockingly mean e-mails from viewers about her displaying her growing bump on air—you know, while doing her job.

Let me make this abundantly clear and, if I may, speak for every woman who is, has ever been or ever will be pregnant: PREGNANT WOMEN ARE GROWING HUMAN BEINGS INSIDE OF THEIR BODIES. Their bodies will grow, expand and, yes, likely get huge, and that’s a good thing. Also? Aside from an individual woman and her doctor, it’s nobody else’s business.

I am so sick of women’s bodies being looked at as communal property, as a topic of acceptable discussion, criticism and judgment. We see it every day in the media and in everyday gossip: This one’s bikini body is too cellulite-laden; this other one’s is “scary skinny;” and yet another one’s is just right. It’s like a warped, body-image version of Goldilocks and the Three Bears.

And it all gets 1,000 times worse during pregnancy. The size of a woman’s bump is an easy, obvious and lazy conversation topic (much like its annoying precursor: “So, when are you going to have a baby?”), but for some reason, it’s an acceptable one.

Trust me, at some point over the course of those nine months, most pregnant women feel enormous. We don’t need a reminder that we are, indeed, enormous. Now, a woman may actually voice that feeling, but if she does, it’s not anyone’s cue to say, “Yeah, you really do look like you have triplets in there.” Silence is golden.

Sure, adorable baby bumps are featured on the cover of practically every magazine these days. But look a little closer at the type of coverage that’s out there. What the world is basically saying is: Baby bumps are cute…as long as we decide we like the way they look and we approve of how you’re living your life.

Judgey everyday comments in conjunction with judgey magazine covers put an unfair, unhealthy pressure on women to look a certain way and act a certain way right after their babies are born, during what should ideally be the happiest—albeit most frenetic—time of their lives. And it makes them start worrying about it during their pregnancies. Talk about focusing on the wrong things.

The added proof is in those all-important body-after-baby magazine covers, where celebrities discuss how they lost the baby weight in record time. And if they don’t? Well, there will be (social-media) hell to pay, as evidenced by the hideous treatment of Kelly Clarkson, who dared to retain some of her baby weight nine months after giving birth. It’s online bullying and body-shaming at its worst, and sadly, other women are often at the forefront of it.

Ladies, you should know better. If we want to have a healthy environment for ourselves and for our children, we need to leave the mean-girl attitudes behind. High school is over.

Tell Us: What types of comments bothered you while you were pregnant?