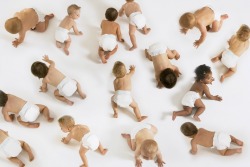 When I was in college, my best friend totally called me out on my penchant for keeping secrets.

She’d joke that someday I’d probably have an entire secret life in Anguilla (the most exotic-sounding place that our 19-year-old selves could think of)—that I’d get married, have three kids and wait years to tell anyone about it. And then I’d casually slip the big news into a random conversation with: “Even though we talk every single day, I think I forgot to mention this one teeny little thing…”

At the time, I was an open book when it came to a lot of things in my life. But when it came to others—the really big things that made my superstitious brain get skittish or things that felt awkward to announce—I would leave them out of the conversation till I couldn’t anymore. At that point, I’d have to talk about them because it would be super weird if I didn’t.

I’ve gotten a lot better over the years, but hey, I’m not perfect. And right now, I have a HUGE secret, and one that’s about to get super weird if I don’t bring up, considering I run a parenting site.

I’m just about 6 months along, and of course, we’re all very excited. Well, everyone else is very excited, and I’m very nervous and afraid I’m going to jinx things just by talking about them…but very excited nonetheless.

Much like my best friend hinted at all those years ago, I’d much rather wait until the little one was safely out of my body and in my arms and then say, “Surprise, everyone!” So much can happen on the way to a child being born, as I unfortunately know all too well, and I never quite feel in the “safe zone” because of that. But my burgeoning baby bump will give me away sooner rather than later, and I’d rather be the one to dole out the news this time around.

See also  How to Get Perfect Pictures of Your Kids

When I was pregnant with my son, I was unceremoniously outed on live television. At the time, I was working as an on-air spokesperson for a celebrity-news magazine, and I was doing my annual morning-after-the-Emmys rounds at various networks. My belly had popped just two days before, and I was still coming to terms with the idea that my secret couldn’t stay a secret for much longer.

Well, that morning, I wore a super-flattering and slimming black dress, and the chair and the camera angle mostly covered my mid-section. Plus, before the segment started, I’d specifically told the anchors, who I’d known for years, that I hadn’t made a formal pregnancy announcement yet and was still getting used to the idea that I’d have to tell people soon.

So, we started the segment, talking about the best and worst dresses from the night before and all the inane but enjoyable stuff that goes along with red-carpet talk. And at the very end…one of them asked me if I’d dressed up the night before and gone to a party. I replied with my standard quip that I had enjoyed the show from the comfort of my couch and in my pajamas, because I was diligently taking notes for this segment, and said anchor replied with: “And that’s OK, because Dawn is 6 months pregnant!”

I was like a deer in headlights as the next minute—one of the longest minutes of my life—focused on the “announcement,” questions about whether I was having a boy or a girl, and so on.

Why did they out me? Because they felt like “their audience had a right to know.” Um, no. Just no. Which is a whole different post for another day.

So, this time, it’s my turn to tell the news. Happily, excitedly and when I’m ready. Or as ready as I’ll ever be.

Tell Us: When did you announce your pregnancy? And how did you do it?