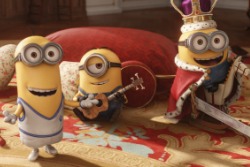 Move over, Simpson family. You’re no longer the reigning yellow crew in town. The Minions have taken over, much to the delight of kids everywhere—my son included.

In fact, I think that my 3-year-old might actually be a Minion.

The evidence: He’s little. He’s cute. He often talks gibberish. He loves dinosaurs and vampires and bad guys. (Good guys, too, but sometimes he gets confused—i.e., the other day, he told me that Darth Vader was the good guy in Star Wars. Yikes.) He doesn’t get defeated when things don’t quite go his way. And it’s not that he’s evil, per se, but he gleefully destroys things and occasionally loves being the naughtiest he can possibly be.

As far as evidence to the contrary, well, he’s not Tic Tac–shaped and he’s not bright yellow—unless he’s gotten into the finger paint again.

So, maybe he’s not actually a Minion‚ but boy, does he love them. And every time we saw a preview for or billboard of the movie, extreme giggles and pleas of “Can we see that, pleeeeeease?” ensued.

That’s why I jumped at the chance to see an early screening of Minions in New York City. (Big shout-out to What the Flicka? for making that happen!) The second reason I jumped at it? I’m super-duper pregnant, and it was a rare opportunity to sit in an air-conditioned movie theater for 90 minutes with a suddenly still, completely enraptured 3-year-old. Just kidding! Um, sort of. 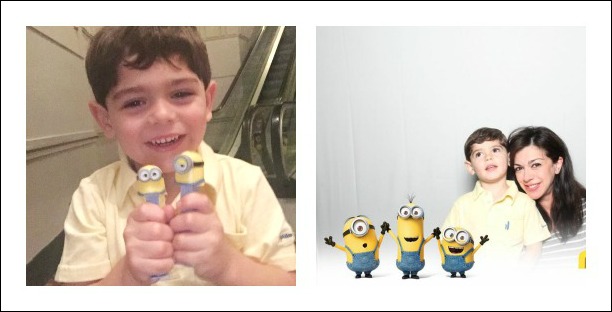 So…the movie itself? It was adorable, and my 3-year-old couldn’t have loved it more.

The gist is that the Minions are always in search of an evil overlord to serve, but they can’t get it quite right. After a particularly bad mistake, they go into hiding in Antarctica…and then into a deep depression because they’re not fulfilling their evil little destinies. That’s when Kevin comes up with a plan: He, Stuart and Bob are going to convince supervillain Scarlet Overkill (Sandra Bullock) that the Minions will be the perfect henchmen. At first, things seem promising, but of course, it all quickly goes to hell in a hand basket. Hilarity ensues, the villain is defeated, and by the end—slight spoiler alert!—we briefly meet the Minions’s next despicable master.

At first, I cringed a little at some of the exaggeratedly violent antics, like accidentally pushing a dinosaur over a cliff to his fiery death, and I wondered if I needed to have a conversation with my son about it. And then there are the jokes intended for adults—like when Stuart dons a thong and gets cozy in a hot tub with two “bella” yellow fire hydrants. But all was so silly and over-the-top, it turned out not to be an issue. It was certainly no worse than anything we watched as kids. (I’m looking at you, Tom and Jerry.) Plus, those little tidbits kept me laughing throughout the movie.

It’s easy to see why kids love these little yellow men: They’re basically the essence of every toddler and preschooler on the planet. They’re cute and lovable, and they go after what they want with gusto, consequences be damned. Kids also respond to the Minions’s gleeful attitude toward anything and everything, their slapstick mishaps and their made-up language, whether or not they follow every detail of the movie’s plot.

In short, it was a hit all around, and now my son is now a die-hard Minions devotee. Also? I realize it’s still early, but I’m pretty sure we’ve got a costume all picked out for Halloween.

Tell Us: Which movie characters do your kids particularly love?