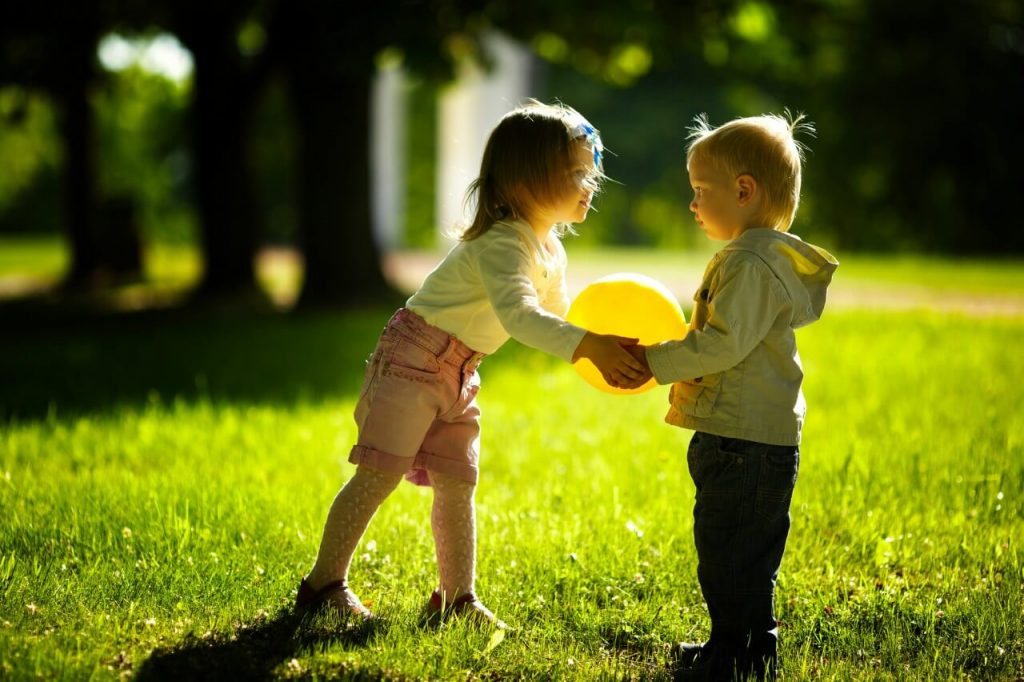 Motherhood can be magical when it’s not making us completely insane. We get to experience the sweetest moments that make us remember just how worthwhile it is: the world’s best snuggles, the gooey toddler kisses, that spark when our little one understands something new, those shared confidences in the dark before bedtime, the belief that Mommy can fix anything.

But there’s another kind of magic at play when you’re a mom, and it’s even more fleeting and delicate. What is it? Witnessing the magical moments that happen for our children that we’re not part of. That is a whole different kind of gift.

Sometimes we’re too frazzled to notice these moments when they’re happening. Sometimes we’re being pulled in multiple directions—sometimes literally by multiple kids. And sometimes we’re hovering a little too much, either because we’re worried our kids will get hurt or because we think we’re being better parents when we’re right there with them all the time, experiencing everything with them. Of course we want to be involved and that’s important, but knowing when to take a strategic step back is important, too.

Well, last weekend, all the stars miraculously aligned in my little world.

I was at my son’s second-ever T-ball game, and the field happened to be right next to a playground. That made things perfect for attending the game with a toddler, who needed the distraction so she didn’t run straight to centerfield to try to catch a fly ball. She’s a tough, independent, little cookie, and she happily amused herself on slides and assorted playground equipment meant for kids at least five years older than her.

I started talking to one of the other moms, and we introduced our little ones. Her son was 3 and a half, exactly a year older than my daughter, and they instantly took to each other. They played near us at first, and then they meandered off together, toward the big evergreens in the not-too-distant distance.

Eventually the other mom went back to her mat to tend to her other little one and watch the game from there, and I stayed situated in this strangely perfect spot. I was at the edge of the playground, probably 20 feet from the baseball field and 20 feet from the trees, so I could alternate between watching both sets of kids.

Now, I’m a big fan of letting kids explore on their own, but generally speaking, I probably would have been shadowing my toddler a little closer. Not necessarily because I’d feel the need to be right there, even though she is a total daredevil, but because she’d want me with her. Before she met her new friend, she had wanted me to run off to the swings with her, but I told her I could only do so for a few minutes because I also wanted to watch her brother’s game.

So, there she was, with a little more independence than she normally would have had, and that’s when the magic happened.

It was like I was watching a scene inside a snow globe, filled with invisible fairy dust that made everything perfect and magical and a little surreal.

She and her little buddy were involved in some very serious conversation, and then they apparently decided to start their very important job. There were dozens of pinecones on the ground, and they made it their afternoon mission to pick every single one of them up and gather them under a tree. When they took periodic breaks from this activity, they chased each other around the trees, held hands and explored the area together.

See also  Why Is Bedtime So Ridiculously Frustrating?

My daughter, in her pink-bottomed tutu dress and with her wildly curly hair bouncing in a ponytail on top of head, lit up in an entirely different way. She wasn’t my unruly toddler or her brother’s sometimes-annoying little sister. She was her own person, and she was free to do whatever she wanted. The veil of restraint had been lifted (or, at least, she thought it had.) The way she smiled and laughed and navigated this new relationship with confidence and outright joy—it was certainly something to see.

Part of me desperately wanted to go over to them and hear what they were saying to each other and to capture the sweetness on my iPhone, but I resisted the impulse. It all felt too fragile, and I didn’t want to ruin it.

It was like I was watching a scene inside a snow globe, filled with invisible fairy dust that made everything perfect and magical and a little surreal. They were in their own little world, and it was perfect. Eventually, they were joined by another friend, and it got even cuter.

I have to admit, I stopped watching my son’s game for longer than I probably should have. And I probably looked like a complete weirdo as I stood there, in the middle of nowhere, staring off into the distance with a goofy smile on my face.

For these two kids, this magical little scene was just kiddie business as usual. Making new friends and playing like this is a normal part of childhood, and neither of them will probably have any memory of it. But I certainly will.

Tell Us: What part of childhood do you find particularly magical?