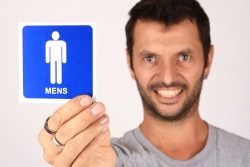 There’s been a lot of potty talk lately. And it’s not just because I have a 3-year-old.

First there was Ashton “Dude, Where’s My Changing Table?” Kutcher, talking about the pathetic lack of changing tables in men’s restrooms. And rightly so.

And now, there’s the whole brouhaha over the makeshift sign in an Oklahoma mall bathroom that tries to ban 6-year-old boys from using the women’s bathroom with their moms or female caregivers.

The sign reads: “Please. Boys over 6 years of age use Men’s restroom. Thank you.” 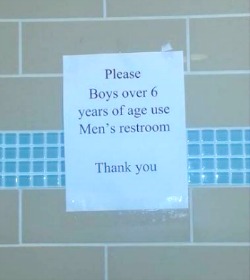 Ever since a picture of it was posted on a parenting blog (and shared a bazillion times), the outrage has been palpable. Parents bring up issues of stranger danger, kids who still need help wiping and washing hands, children with sensory issues and so on and so forth. They say that more gender-neutral family bathrooms are necessary. And these are all excellent points.

The problem is, they’re ignoring the basic problem with the sign. Sure, those are all subsequent problems that may arise if your child has to go into an unfamiliar, frightening and potentially dangerous public restroom by himself. And sure, as some commenters have said, there isn’t really an issue in women’s bathrooms because everyone is behind a closed door in a stall, anyway.

See also  We Don't Give Our Kids Enough Credit

So what’s the issue that no one is discussing? The fact that even engaging in this argument lends credence to the idea that it’s OK to sexualize 6-year-old children.

It is beyond ridiculous.

We talk a lot about our society sexualizing young girls and forcing them to grow up faster than they should, with messages on TV and hyper-sexualized clothing. And this is the flip side for boys. As they say, boys will be boys…and boys can’t control themselves, right? First of all, wrong. Second of all, these boys are—again, let me emphasize this—children. They aren’t thinking sexual thoughts. They aren’t sexual predators. They don’t think like adults because they aren’t adults.

If we’re sending this message to our boys at the ripe, old age of 6—that they’re uncontrollable perverts who can’t help but objectify and peep at random women—how will it morph and mutate in their malleable minds as they become tweens, teens and adults? Let me tell you one thing: It won’t end well. How do I know? Because it’s not currently going well in our society.

And don’t even get me started on the fact that we’re expecting 6-year-olds to walk into a bathroom full of strange men for our own warped ideas of comfort and propriety.

If we want to truly make the world a better place for our kids—all of our kids—we need to cut the crap and start acting like adults. Now.

See also  Today Is the Day That Everything Changes