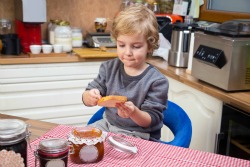 Yesterday, my 3-year-old made himself toast.

He was hungry, so he opened the fridge, got out the raisin bread, popped it in the toaster, and then slathered butter all over the hot bread. When I tried to help him, he insisted that he could do it by himself. I was so proud, I felt like I was going to burst.

And then today, he took out two knives from the silverware drawer and ran down the hallway with them. (Butter knives, but still.)

And he dumped an entire bottle of water onto the couch just so he could clean it up.

And threw everything that was folded on a chair and waiting to put away onto the floor so he could “work” at the table.

This is the problem with letting kids grow up. For every toast victory, there’s a potential trip to the ER and a potentially trashed living room.

Oh, who am I kidding? The living room is trashed every damn day; we’re just talking about degrees of disaster here. And just in case you were wondering, most of the cabinets in the kitchen are childproofed, but I thought that my kid might be able to get his own spoons without a crisis ensuing. Silly me.

I don’t want to be a helicopter parent, I really don’t. But OMG, the danger! The mess! The unsafe city streets!

Yeah, I need to take a breath.

I want my kid to be self-sufficient and independent, and I know that I can’t protect him from everything. I also know that it’s better for him in the long run if he experiences a little pain, failure or disappointment now because it’s the only way that he can truly learn. I can teach him and I can give him rules, but he can only understand so much without experiencing it himself.

If it sounds like I’m trying to talk myself into this, it’s because I am. I know all of this rationally, but emotionally? Let’s just say that awareness doesn’t always necessarily translate into action.

Anyway, after I got the knives out of my son’s hands, we sat down and had a very serious talk about why playing with knives—and certainly running with knives—is a non-negotiable no-no. And then we talked about how certain things are dangerous and that what I say goes in those situations, end of story. I think it sank in at least a little.

A little while later, he was hungry. After yesterday’s success, he wanted to make raisin bread for himself again. So he got the bread out of the fridge, climbed up on a chair so that he could reach the toaster and popped in the bread. When it was ready to come out, though, he burned his finger on the hot toaster.

And that was the best thing that could have happened. A little pain, a little reality and a little life lesson—all experienced while I was watching over him from a safe distance.

Tell Us: How do you balance your children’s independence with your desire to keep them safe?