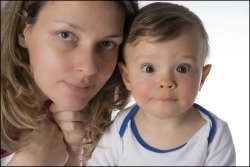 My son has ruined television for me. Which really sucks, because I really like television.

I realize that probably makes me sound lame, but it’s the truth. I like to curl up on the couch, computer in my lap (yep, that’s me, right now), writing and screwing around on the Internet. I grew up in a very loud household, and that’s how I focus best. Also, since I’m a mom, it lets me multitask without giving up one of my favorite guilty pleasures.

The problem is, since becoming a mom, I see everything with mom eyes.

Obviously the news, with its depressingly dire stories, is a problem for most parents, and I am no exception. But I have a really hard time with fictional stuff, too. Of course, I’m sure it has something to do with the type of things I tend to like. There’s Criminal Minds, The Walking Dead, The Strain, Pretty Little Liars, Grey’s Anatomy (seriously, have you ever seen an episode about babies?), every Halloween movie ever made during a cable marathon—and, well, you get the idea.

I worry about all of the awful things that could potentially befall my child, but I also feel ridiculously sad about even the minor characters who get killed off because they’re someone’s kids or someone’s parents. Never mind that they’re fictional. It doesn’t matter to my brain.

Then there’s Frozen on Ice. Yes, Frozen on freaking Ice. I started tearing up from the minute that they started singing and skating (yes, during the happy part) because I knew what was going to happen. Dead parents, Elsa’s crippling self-doubt and fear, Anna’s desperate desire for love…I just couldn’t deal.

See also  The Holidays: Then and Now

And I’ve realized that having a kid hasn’t only ruined entertainment for me—it’s ruined everything nice and adult that I liked in my previous life. Here are 8 other seemingly innocuous things that now worry me to an unnatural degree.

Home decor I bought before having a kid: Everything delicate and sparkly and made of crystal translates into blood and a possible trip to the ER.

Trains, planes and automobiles: I love the peace and quiet of occasionally traveling by myself for a few hours. I recently visited a friend in Maryland—eight hours roundtrip on the train in one day—and when people told me I was nuts, I replied, “Are you kidding? It’ll be blissful! I never have that much consecutive uninterrupted time!” But there’s the dark side to going anywhere by myself: I worry that I’ll meet an untimely end while I’m traveling and never see my kid again, or that something will happen to my son while I’m away and I won’t be able to get back quickly enough. So much for the relaxing mental break.

My iPhone: Please tell me that I’m not the only one who checks it surreptitiously and occasionally makes excuses to slip away for a quick minute because I don’t want my child seeing me on it too much. “Be right back, baby: Mommy is going to put on some socks…and check a very important post on Facebook.”

High heels: I love shoes, and I have a pretty damn amazing collection in my closet that barely gets worn these days. That’s because now, all I can think of is toppling over in my five-inch pumps while holding my son and breaking my neck while attempting to break his fall. And buying new shoes? I’m faced with the depressing choice of buying the Jimmy Choos I’m lusting after or paying for soccer and music classes for my son for an entire 6 months. Obviously the Choos lose. I hate being a responsible grown-up sometimes.

Belts: OMG, why are you putting that around your neck?!

Music: Not to sound like an old lady here (though I’m totally going to sound like an old lady here), but have you heard the language on the stuff that’s popular these days? But even when it comes to my favorite “oldies,” things are not all that rosy. I mean, some bands are obviously off-limits—bye-bye, Nine Inch Nails and Rage Against the Machine—but even my old standby, the ’80s station? Sir Mix-A-Lot, I’m sorry, but I really don’t want to explain the line: “My anaconda don’t want none unless you’ve got buns, hon.”

Pastry for breakfast: There is nothing I love more than eating cannolis and cake the morning after a holiday. But now I feel guilty I’m setting a terrible example for my toddler. And how can I eat it and not let him have some without being a big, ol’ hypocrite and setting off a tantrum to end all tantrums? That said, I don’t feel guilty enough not to eat it. I’m just smart enough to cram it into my mouth while he’s occupied with his Lego set and not looking.

Tell Us: What weird things stress you out now that you’re a parent?