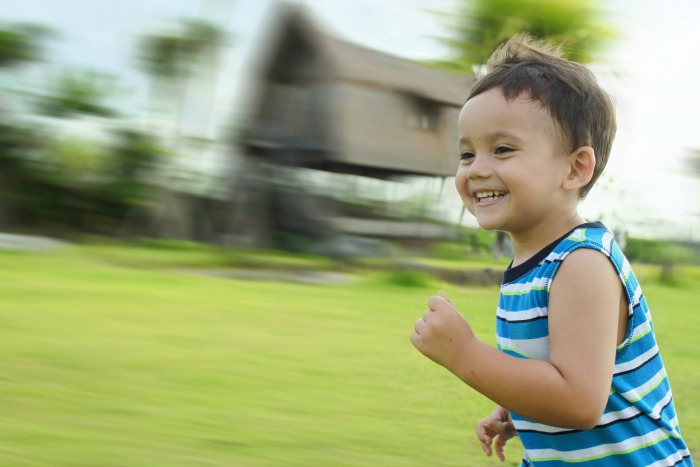 Mama’s had a rough two weeks.

First, there was the haircut.

My 2-year-old had needed a haircut for months…but it would be his first haircut. As in, that precious baby hair that took forever to grow in. It was wispy and overgrown and so much a part of him and his babyness that I couldn’t bear to get it chopped off. It wasn’t just hair—it was him. My baby.

But cut it, we did. And he suddenly looked so much more like a little boy, so much less like a baby. In the span of 10 minutes.

Then there was the gentle separation at his new preschool—our final separation after two and a half weeks of my observing from the periphery of the classroom. I braced myself for tears from him that never came. I waited for him to cry for his pacifier or demand my hair so that he could soothe himself, but he never did. He was happy. Independent. Confident. He occasionally checked in with me to show me whatever activity he was reveling in, but he was good on his own. He was separating.

I wasn’t. I was the crazy mom with tears in her eyes, bursting with pride at how well he was doing but also trying my hardest not to full-on sob until I got out of his sight line.

The older I’ve gotten, the more I’ve found it completely mind-boggling that people don’t need advanced degrees in parenting to become parents. I mean, yeah, there’s the taking them home, the caring for them, the teaching them, the keeping them alive when they’re trying to tumble headfirst into everything.

But mastering the art of separation may be the biggest thing of all. Because it’s so easy to overstay your welcome. To ignore the signs that they’re ready to take that next step and grow up just a little. To keep those babies as your babies for just a little longer, a little longer than you probably should. He was separating. I wasn’t. I was the crazy mom with tears in her eyes, bursting with pride at how well he was doing but also trying my hardest not to full-on sob until I got out of his sight line.

Yes…separation is healthy. Separation is good. There’s just a part of me that doesn’t want it to happen yet.

A friend and mentor of mine always says that the parent-child relationship is the only one that moves toward separation, not togetherness. And over the last two years, I’ve realized just how accurate that is. As a mom, you are literally one with your child for 10 months. And even after birth, that doesn’t change much. Newborns are as much a part of you as an appendage or, more to the point, your heart. But after a few months, they’re trying to sit up, trying to crawl, trying to walk, trying to assert their independence in every way possible. Trying to get away from us—their parents, their moms.

And it’s all great and healthy and wonderful. Can you think of a moment when you were prouder than when you saw your little one take his or her first steps? When he told you he wanted a banana instead of a strawberry? When he gathered up the courage to let go of your leg and venture out into the sandbox to play with his first friend?

See also  Why Is Bedtime So Ridiculously Frustrating?

I mean, this is what we’re working toward: Making sure that they can survive without us and grow into wonderful, well-adjusted adults. After all, a mama’s boy is adorable at 4, not 40. And no one wants to create the next Norman Bates.

Yes…separation is healthy. Separation is good. There’s just a part of me that doesn’t want it to happen yet. I feel like I’m going to blink and my son will be starting high school. And that I’ll blink again and I’ll be dancing at his wedding.

So, I stayed an extra day in preschool that week—another 30 minutes watching, the rest of the time lurking in the lobby while ostensibly doing work on my computer. I knew that it would be the last time I’d see him in his element quite like that, the last time it’d just be me and him, and I just wasn’t ready to give that up.

I don’t think I ever will be. But I’m going to do my best not to let that get in his way.

Tell Us: What was hardest separation milestone you’ve gone through so far? And what moment are you dreading the most?