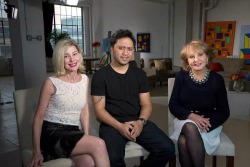 I have a slew of half-finished posts that are demanding my attention, but I can’t seem to focus on a single one of them right now. Why? Because all I can think of is Mary Kay Letourneau and Vili Fualaau.

I am loath to give this story more attention, but I think that my brain needs to work through the horror show that I’m witnessing. The way that the media has been handling the story—if there is a “story” 20 years after the fact—is a crime in and of itself.

It is not the forbidden romance of The Thorn Birds. It is not over-a-century-old sparkly vampire Edward falling for 17-year-old human Bella in Twilight. It is not Lolita or Wild Things or Van Halen’s “Hot for Teacher” video.

It is, however, the real-life STATUTORY RAPE of a 13-YEAR-OLD CHILD, who was in the SIXTH GRADE at the time of the initial CRIME. I feel like I have to capitalize those important words to make my point because every single media outlet in the country seems to be missing it.

Here are just a few of the headlines that have dominated the news over the last few days after Barbara Walters’ ill-conceived 20/20 interview….

Seriously?! We want to hear the scandalous, scintillating details of a then-34-year-old married woman, who had four children, having sex with a 13-year-old? How are we supposed to feel about the fact that Mary Kay said, unrepentantly: “The incident was a late night, and it didn’t stop with a kiss. And I thought that it would, and it didn’t. … I thought, ‘Why can’t it ever just be a kiss?’”

I’ll tell you how I feel: I feel absolutely sick to my stomach. My son is only 3 right now, and one of the biggest fears that I have is putting him in other people’s hands. I have to trust those people to guide him, teach him and keep him safe—and trust that they’re not going to endanger his welfare and steal his childhood. Mary Kay’s and Vili’s “love story” is literally every parent’s worst nightmare.

The best part of this whole thing is the follow-up question asked by many of these media outlets: Should her sex-offender status be lifted so that she can teach again?

Is this even a question? Especially after Vili once hosted a “hot teacher” party at a club, during which he DJ’ed and Mary Kay signed autographs? Yeah, it’s a good thing she has developed such great common sense and maturity over the years.

As some of my friends have rightly pointed out, we would never even be having this conversation if the rapist was an adult male. But because Mary Kay was an attractive woman and they ended up together—and, mind you, Vili has battled alcoholism and depression throughout it all—the media somehow wants to soften and rewrite the narrative. It plays into our collective subconscious fantasy about being, yes, hot for teacher. Which is just fine for a fictionalized story, but not for anyone’s reality.

Yes, parents are responsible for teaching their kids values and alerting them to the potential dangers of the world. But kids are kids, and they don’t always make the best choices. And the media is incredibly influential in what kids deem acceptable and non-acceptable. The way that this story is being framed, even if not explicitly—that Mary Kay and Vili were star-crossed lovers destined to be together, despite all odds and a significant age difference—is damaging and unhealthy.

READ  Why Trump's Misogyny Is So Dangerous for Our Kids

Tell Us: What do you think of how this drama has played out in the media?