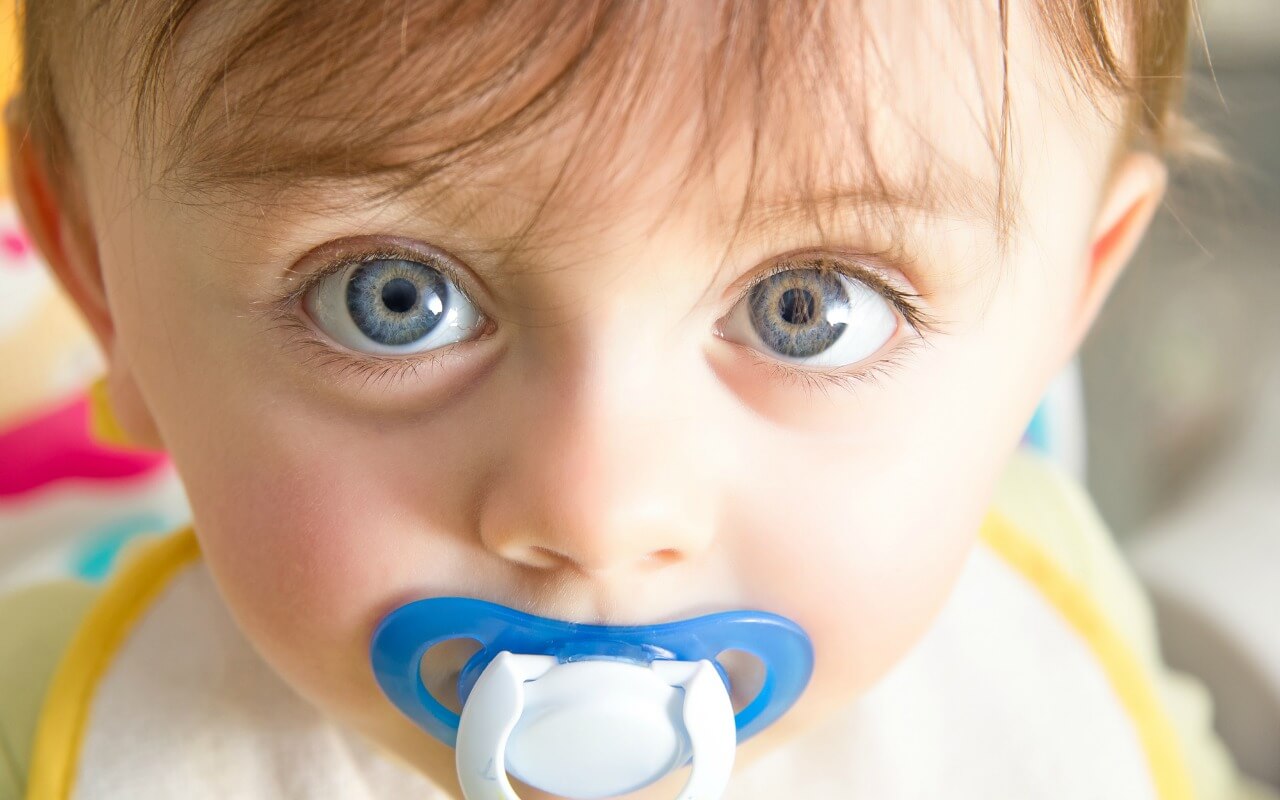 Pacifiers are God’s gifts to moms. I truly believe that. So, if you’re a paci mom like me, go ahead and pop that binky in your kid’s mouth, hold your head high and get on with your day.

I know that’s an unusual attitude, and I certainly didn’t always feel that way.

With the exception of breastfeeding, there is nothing more weirdly controversial than the use of a pacifier. And as with breastfeeding, I find this completely mind-boggling. Why anyone cares what other moms use to soothe their babies or toddlers is beyond me. For crying out loud, we’re not giving our kids crack. And no, this is not the metaphorical version of crack. Really.

But people love to share their opinions on this topic. I could fill the equivalent of War and Peace with the comments I’ve received, but my favorite was the following delightful exchange, which occurred when my son was around 2 and a half and was happily minding his own business at an outdoor concert.

“You have to get rid of that pacifier, young man.”

So said the complete stranger sitting next to me—an old dude with Albert Einstein hair and a mole above his left eyebrow the size of Rhode Island. I was annoyed, but I smiled and then focused my attention back on the concert.

And then his: “You’d better get rid of it or your teeth will fall out.”

I wanted to say something, anything, but I couldn’t believe that had happened, and my mama-bear instinct made me just want to get my toddler as far away from that man as possible. But, as a few friends suggested later, I could have said, “Yes, they actually will fall out soon since they’re baby teeth.” Or, of course, something a little less clever but a lot more colorful.

Let me just say once again to all of the opinion-givers out there: A CHILD’S PACIFIER USE IS NONE OF YOUR BUSINESS.

Parents who are pro-paci are not oblivious to the pacifier’s potential pitfalls. (And no, all of a child’s teeth falling out is not one of them unless you’re coating them in sugar daily.) I had extensive and repeated conversations with our pediatrician and dentist about my son using a pacifier after he turned 1. Every set of professionals will have a different take on this and you need to talk to yours, but mine were old-school and chill—and truth be told, that’s probably why I liked them in the first place. They kept an eye on his teeth and his speech, and they said not to worry: As long as he gave it up by 3, we were all good.

Still, I was ashamed.

I always felt the need to qualify my son’s pacifier use. And I always hung my head a little bit whenever I talked about it, explaining, “I know that I shouldn’t still let him have one. We’re definitely getting rid of it soon.”

The only thing I’m ashamed of now is that I was ashamed at all back then.

Now, three years later, I’m in the same boat with my daughter. She’s a stubborn toddler, and she loves her pacifier. And not only am I unapologetic when confronted by complete strangers (and well-meaning family and friends) about her pacifier use, but I’m also kind of indignant about the whole thing. Because there is absolutely no reason I should be apologizing to anyone about my parenting choices. (Again, we’re not talking about giving toddlers crack here.)

Is the pacifier for every parent and every kid? Of course not! It’s an individual choice, and this is mine. So I’ll be using it as long as I think it’s developmentally kosher.

So, why do I love the pacifier so much?

I’m so glad you asked!

For starters, it’s a plug. I’m not talking about a plug to shut kids up. I love hearing my toddler’s adorable little voice, and she talks constantly, pacifier or not. (That said, I don’t let her have it all the time when we’re at home, and I take it out of her mouth when she speaks so that she’s more understandable and not developing bad speech habits.)

No, I’m talking about a plug that keeps out unwanted things, especially when we’re out and about. The first biggie? Germs—including her germy hands and others kids’ germy toys. I’m not a germaphobe…but I’m kind of a germaphobe. That’s because I know that when of the kids gets sick, we’ll all drop like flies before long. And who will get sick for the longest? Me. So, for purely selfish reasons, I am all about that pacifier.

Speaking of which, dropped pacifiers will drive any parent completely insane. You can avoid that situation altogether with a pacifier clip, a little piece of fabric that attaches to your child’s clothes on one end and loops around the pacifier on the other, making sure it doesn’t tumble onto a germy surface. These things changed everything for me.

In addition to the germ problem, there’s the safety issue. Toddlers are into everything, and if you’re not at home, choking hazards are everywhere. And even when you are at home and you have an older child, choking hazards are everywhere. Of course you can’t and shouldn’t let your kid use a paci 24/7, but it can certainly help when your attention is split and you want to minimize the chances that something dangerous will go in her mouth. Tiny Lego pieces are going to be the death of me and/or my sanity, I swear.

See also  Friday Favorites: Vitafive Vitamins and a Coupon for You!

Let’s also talk about the ick factor. A three-day old blueberry that some kid drop-kicked at the park is both germy and a choking hazard, but it’s also really gross. It’s likely also covered in dirt and has possibly been pecked at by a bird. And let’s be realistic: If you have a toddler, she will zero in on it as if it had a big, blinking red light on it.

Then there’s teething: my personal hell on earth. Anyone who thinks that kids are the only ones who feel teething pain has either really lucky or hasn’t hit the really awesome portion of teething yet. My kids made sure that I was aware of every little twinge of pain they felt, especially if it was at 3 a.m. A pacifier helps kids sleep or at least relax a little until the Baby Tylenol kicks in.

Finally, let’s talk about plane rides and ear-popping. The sucking motion helps a baby or toddler work through the pressure transition, helping to minimize or fully avoid discomfort. And I don’t know about you, but the idea of not having a screaming child on an airplane makes me incredibly happy.

I’m happy to report that my son is now 5 years old, and the pacifier is a distant memory for him.

We went cold turkey at 3 years and 4 months—a little later than I’d planned, but I wanted to wait to take it away until we made it through a trip to Disney. Of course, I was worried that he’d completely freak out, but after his first slightly grumpy day without it, he cared less and less, and before I knew it, three days had gone by and he’d forgotten all about it.

As for my daughter, she’s 20 months old, and her pacifier use is still going strong. And you know what? I couldn’t be happier about it.

Tell Us: What’s your take on the great paci debate? 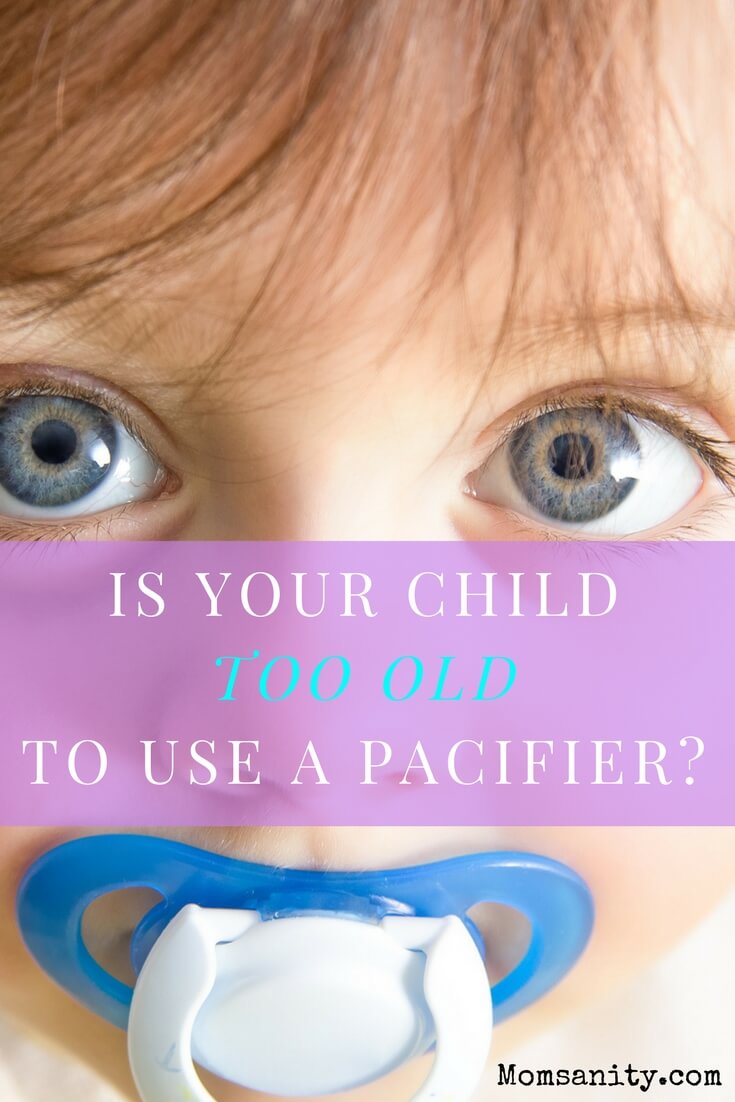