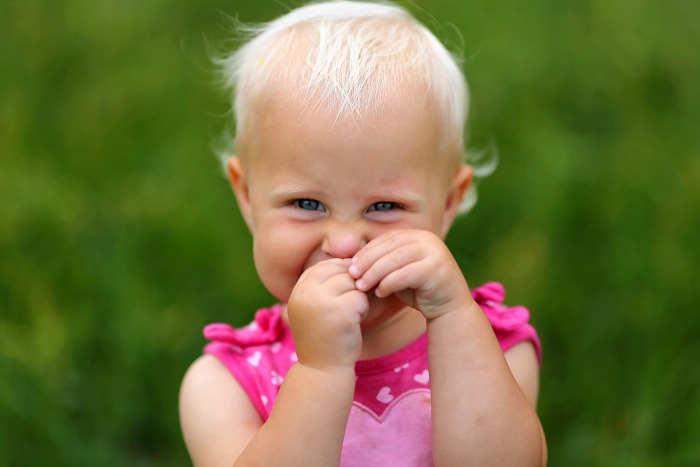 Well, to my credit, I didn’t actually cry…but I came close.

I took my 13-month-old daughter to a mommy-and-me music class last Thursday. We had taken one in the spring, and it was such a lovely bonding time—just the two of us, without big brother siphoning off any of the attention. Even though she was only 8 months old at the time, she absolutely knew that it was special time for her, and she loved it. She was wide-eyed and enthusiastic, and she’d alternate between excitedly shaking those little shaker eggs and snuggling into my body as we sang songs.

So I high hopes for the fall semester.

What went wrong? My daughter had a great time at the class. She just had that great time without me.

Oh, I sat in the little circle and patted my knees to the beat and overexaggerated every single facial expression as I sang along. But my daughter decided that her new teacher was way more interesting than I was and wanted to hang with her.

She sat in her lap. She stood next to her and intently watched her mouth. She tried to co-teach the class as she mimicked the teacher’s actions and directed her attention outward. She did not want to be restrained in my lap. She did not want to be next to me. She made her opinions known loudly when any of this happened—in her nonverbal, grunting, gritting-her-six-teeth way.

I’m pretty sure that my mother would call this karma. Actually, no—karma is too nice of a word. When I mentioned this little experience to my parents, my dad blurted out, “I think that’s what you call payback.” Thanks, Dad.

I was apparently the same way. Some of it, I don’t remember—like not wanting my mother to stay on my first day of nursery school, like all of the other kids’ moms, because I was a big girl.

Some of it, I remember vaguely—like going to my parents’ middle school on a random day off and wanting to “blend in” with their students when I was all of 5 years old.

And then there’s the stuff that I remember all too well—like being a tween and insisting on walking at least 20 feet away from my mother at the mall because OMG, NO ONE CAN KNOW THAT I HAVE A MOTHER. My mom, to her credit, handled it a helluva lot better than I ever would, snarkily saying, “Would you rather people think that you hatched from an egg?”

My son was the polar opposite of this, and he still is. He does his own thing and he loves making new friends, but he always checks in with me. When he was little, it was all mommy, all the time. I could do no wrong, and my hair was his lovey—I was his lovey. And even now, he’s been reeling from his longer days at school without me and is in dire need of mommy time once his little sister goes to sleep.

My daughter loves me, and I know it. On most days, anyway. She’s been pretty much attached to me since birth, strapped to me in a carrier as she’s trotted around to her big brother’s various activities. And I’ve never given her a hard time about sleeping in my arms at night, partially because she and her brother share a room and partially because she’s my last baby. And then there are the times that she’ll crawl into my arms and hug me—really hug me. The. Absolute. Best.

See also  The Six Words That Broke My Heart

But part of me wonders if I’ve done something wrong. Have I not given her enough solo attention? Do I check my phone too much when she’s around? Did I screw her up when I had to drop her with friends every night for a few weeks when she was really little because I was dealing with a family emergency? Am I too preoccupied with getting her to bed so I can get to work—and has that attitude somehow seeped into her little brain?

Tell Us: How do you deal with your kids’ burgeoning independence?