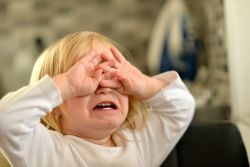 You know those stories that fascinate you, horrify you and confuse you—all at once? There’s one going on right now that I can’t seem to get my head around.

By now, I’m sure that most of you have heard the story of Darla Neugebauer, the diner owner in Portland, Maine, who screamed at a 2-year-old because the child had been reportedly screaming in her restaurant for an hour straight. (Though the parents now contend that she’d been crying for just five minutes.) According to the diner owner, the parents had placed the little girl’s pancakes just out of her reach and were ignoring her. So she decided to take a stand and get the child to “shut up.”

She is completely unapologetic about it. She doubled down on her Facebook page with a profanity-laden defense of her actions and said in a subsequent interview: “I chose to yell at a kid, it made her shut up, which made me happy, it made my staff happy, it made the 75 other people dining here happy.”

In my mind, this is a pretty cut-and-dry case: There are no sides to take and there is no winner, because everyone in this scenario is an asshole.

Just because one party behaved abominably, it doesn’t give the other party the right to behave equally abominably. To be completely honest, it seems like the only person acting age-appropriately (if terribly) here was the hungry, crying 2-year-old. And yet, sides are being taken, and it’s become a bitter Internet war, seemingly between people with kids pitted against people without kids. Personally, I don’t think that you need to be a parent to be appalled by this story—or that you need to be a non-parent to recognize that this child obviously needed some sort of discipline or intervention.

See also  Let Me Repeat Myself ONE MORE TIME About Breastfeeding

Don’t get me wrong: I am not defending these parents. If what we’ve read about the situation is accurate, that was some pretty poor parenting that they were doing—or more to the point, not doing—and it was inconsiderate to the other restaurant patrons. Look, I get it. Screaming kids are annoying. I’m a mom, and I don’t want to be sitting in a restaurant with one, even my own. As a parent, I would have never let the situation escalate to this point.

But the owner of the restaurant certainly wasn’t in the right either. Let me just reiterate: She screamed at a 2-year-old, effectively having a temper tantrum of her own. A 2-year-old. Not a 12-year-old or even a 5-year-old, and yes, that makes a big difference in terms of a child’s understanding. I’m not saying that she shouldn’t have said something or done something. She was well within her rights to do so. But she should have said it—ideally, in a civilized way—to the parents, not to the child.

I know, I know, it takes a village, right? Maybe. But this was not one of those cases. Instead, it was one woman acting passive-aggressively (“Does Table 5 have a check?” she yelled across the restaurant at first, which she claims was her big hint for them to take a hike) who then became aggressive…toward a child.

Children are just that: children. They need to learn, they need to be taught manners, they need a whole helluva lot. There are certainly teachable moments to be learned in this world from other people, but I fail to see how one short-tempered woman smacking a table, “snarling” at a toddler and then admitting that it made her “happy” because the kid “shut up” achieves that.

You scared a kid. Good for you. You got your 15 minutes of Internet fame. Yipee. And your big teachable moment was what? That people should deal with others in an angry, aggressive way? If you taught that to this screaming 2-year-old, well, congrats—you’ve just created one more asshole in the world. Thanks, lady, but that’s one lesson we definitely don’t need to teach our kids.

Tell Us: What do you think of diner-gate?