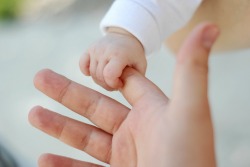 Is there a perfect age to become a mom? I think so.

Now before you start frantically scanning the rest of this post for a number, there isn’t one there. Deciding when to have a kid is such an individual, personal choice, I’m amazed that it keeps coming up as a topic of discussion. Yet here we are.

You may have read about British columnist Ashley Pearson last week, who was basically told that she was “selfish” for having her first baby at 41. She was speaking on a televised panel about the subject, and a male co-panelist told her that “while some people can have babies later in life, others can’t. And that you better get on with it then, hadn’t you?”

And what I say to you, dear sir, is: Mind your own beeswax. That also goes for the “staggering 70 percent of women over the age of 55 [who] are opposed to and uncomfortable with women having babies in their 40s.” To those little old biddies, let me add: Go have some sex of your own, and shut it. I’m sure they’d have quite a few things to say about 49-year-old Laura Linney giving birth to her first baby earlier this month. And Halle Berry, Gwen Stefani, Salma Hayek and any of the other fortysomething celebrities who’ve recently taken the parenthood plunge.

The fact that anyone—and I mean anyone—other than a woman and her significant other feel that they should have a say in someone’s reproductive choices is confounding, appalling and disturbing.

But it happens every day. First when you’re single (“You’d better find someone soon so you’re not too old to have kids”), then when you’re married (“When are you going to get pregnant?”), and yet again when you’re half a minute post-partum (“When are you going to start trying for #2?”). Apparently women are not allowed to live in the moment and enjoy each exciting stage of their lives. Why? My theory is that most people are bored with their own lives, totally socially awkward, and this is an easy/lazy conversation starer.

I had my first child in my mid-30s and hope to have another before I turn 40, but I’m going to be getting there just under the wire. In retrospect, maybe I should have done this all a touch earlier: When I was ready to have my son, I was ready right then. I didn’t realize that would happen, so I didn’t really think about the time it would take to get pregnant, the unexpected bumps along the way and the actual length of the pregnancy (which, by the way, is 10 freaking months, not 9).

So why did I wait? It wasn’t that I didn’t have a significant other who wanted to have kids. I did, and we’ve been together for nearly two decades. It wasn’t that I felt I couldn’t afford it. (Though, really, who can ever?) It wasn’t that I thought I’d be fertile forever, and yes, that is something that concerns me more than a little now.

The plain and simple truth is that I was selfish, according to that man’s standards—and quite frankly, I don’t think see why that’s a bad thing. I wanted to live my life. I wanted to do amazing work. I wanted to travel. I wanted to have fun. I wanted to wait. I didn’t want to “just get on with it.” I mean, God, that’s a horrible way to approach motherhood.

And you know what? Now I live my life in a wonderfully different way. I still do amazing work. I still travel (though, admittedly, with sippy cups and enough puffs to feed a small toddler army). And I’m having the most fun I’ve ever had in my life. But I was ready.

I would’ve been a terrible mother in my 20s. Would I have stepped up to the challenge if I had to? Yes, I’m sure, because that’s me and that’s what women do, but I might not have been totally and completely happy about it. I might have felt that I was missing out. I might have regretted what could have been. I might have resented that someone was getting in my way of being the me I thought I was back then, no matter how much I loved that gorgeous little someone.

Now, don’t get me wrong: If someone’s ready at 23, great! All the more power to her. But I wasn’t. I was still figuring out who I was and what I wanted out of life and in a relationship. I was a different person then. One who was on the road to becoming the type of mom—and person—I really did want to be. But that was me and my choice, and I certainly don’t expect everyone to follow that path.

Look, there’s a lot to consider when you’re thinking of having a kid. But it’s up to you, and it’s not up for debate or popular vote. Not by your in-laws, not by some blue-haired old lady down the street, and certainly not by some male “expert” who isn’t going to sit up all night with your feverish five-month-old so you can get some sleep before your big meeting tomorrow.

So yes, I may have been selfish once upon a time…but I am damn happy today.

Tell Us: How old were you when you had kids? If you had to do it all over again, would you do anything differently, and why?