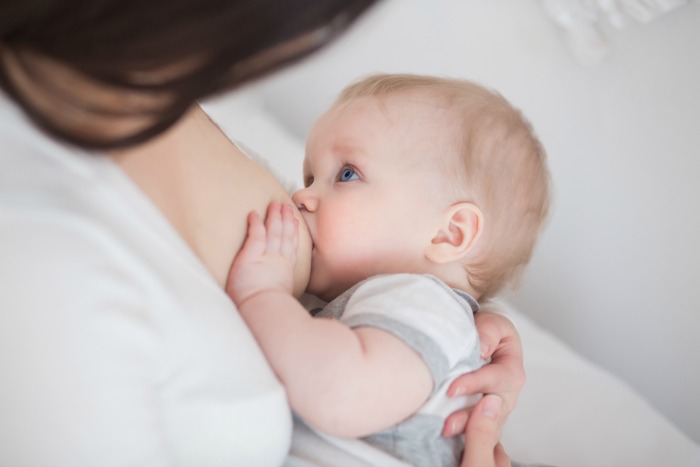 I sobbed for a full 15 minutes while looking at my daughter this morning.

She was playing quietly on her own, and with just one week to go till her 11-month birthday, she suddenly seemed so grown up.

In one month, she went from having no teeth to having six teeth. She took her first steps. She learned to climb a full flight of stairs. She added some new words to her vocabulary. She suddenly has OPINIONS.

My baby…who won’t be a baby for much longer.

She has been toted around with me everywhere since we got home from the hospital, strapped into a baby carrier so that I could take her big brother to all of his various activities. I would joke that I sometimes forgot that she was in there. She was just so happy and calm, and she was an extension of me—the literal version of “attached at the hip” in that carrier.

Breastfeeding contributed to that feeling. She took to it vigorously, and she flat-out refused a bottle for the first 22 weeks of her life.

And now, she is flat-out refusing me. Over the last two days, she seems to have decided that our time breastfeeding is over. But I didn’t agree to this. I am not ready for this.

That was two weeks ago, and tears were literally streaming down my face as I wrote those paragraphs.

Dramatic much? Yeah, I’m a mom now. I cry while reading Are You My Mother? and while watching Angry Birds. So the apparent end of breastfeeding my last child? The drama and the crying are fully justified.

If you had told me that I would have felt this way at the beginning of my breastfeeding journey with my first child four-and-a-half years ago, I would’ve told you that you were nuts. An Earth mother, I was not, but I plowed through those first three months of cracked nipples and round-the-clock nursing. Then, much to my surprise, it not only got easier—I loved it. I am very much a person who believes that “fed is best,” but this was right for me and my son. It was right again for my daughter.

All that said, while breastfeeding is a bonding experience, it’s also what you do to keep a kid alive. It always makes me angry-laugh when people cite that as a reason for moms not to breastfeed in public. You can’t have that beautiful moment every single time you’re feeding a newborn, especially when you have another child. For crying out loud, newborns eat all the time…and sh*t needs to get done.

And yet, it makes me feel guilty.

Have I been taking our time together for granted? Did I let life get in the way of these irreplaceable moments? Why can’t I seem to catch up to all of this growing up?

I’ve been juggling so much this time around that I feel like I’m on a runaway rollercoaster most days. Have I been taking our time together for granted? Did I let life get in the way of these irreplaceable moments? Why can’t I seem to catch up to all of this growing up?

Right now I feel like I would trade an entire year of sleep just to have one more blissful month of her nursing happily. Really.

In the end, I’ve been able to buy a bit more time. She got through her big developmental spurt and started walking past those first few steps, which is apparently a big cause of nursing strikes. We also did some skin-to-skin cuddling. But she’s been biting me to let those opinions of hers be known (ouch), and she’s only interested in nursing before bedtime and sometimes first thing in the morning. For now, though, we’re still in business.

I know we’re on borrowed time, but that’s OK. I’m grateful for the second chance, and I’m going to soak in all of those moments while they last.

Tell Us: Which milestones did you have a tough time with?