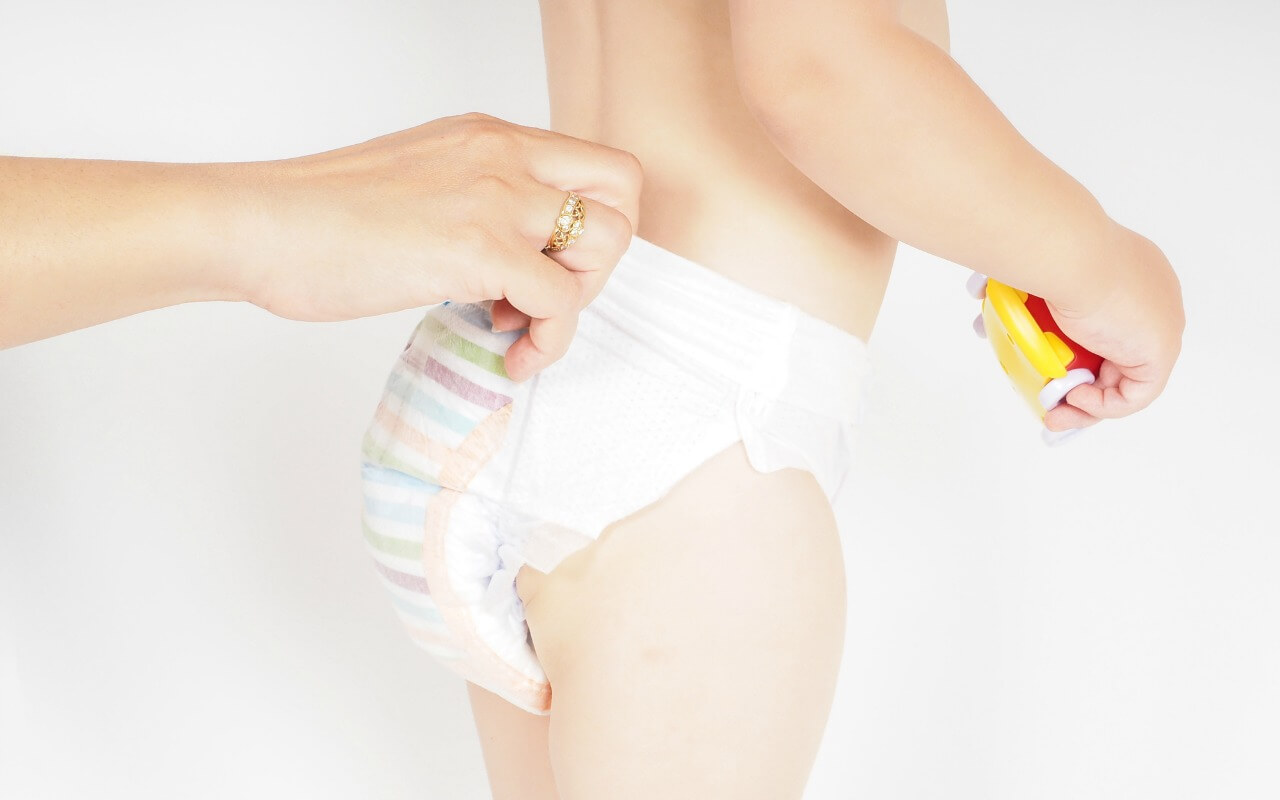 Diaper rash is the worst. And the worst diaper rash? There aren’t adequate words…but that’s OK because your child’s screams say it all.

When babies have a diaper rash, their little bottoms are red, raw, spotted and possibly even bleeding. And if they pee in their diaper when one is raging? Judging from my daughter’s cries, I’m assuming it’s the equivalent of pouring salt into an open wound—if that salt was mixed with a gallon of acid.

The crazy part of all this? As a second-time mom, this is completely new to me. I somehow made it through my firstborn’s diaper stage without a single diaper rash. Seriously. I may even have been a little smug about it.

This time around, well, let’s just say that the universe knocked me down a peg or 20. My poor daughter has the most sensitive skin and is prone to the worst diaper rashes. Looking back, I realize that my son’s lack of diaper rashes was pure luck and had everything to do with his skin and digestive system and nothing to do with me.

So, over the past 10 months, I’ve gotten a crash course in all things diaper rashes. How’s my toddler’s bottom now? Mostly good, but I have to stay vigilant or else her rash comes back with a vengeance. The good news is that now I know how to minimize her discomfort in the moment and get rid of a diaper rash fast.

Here’s how you can do the same.

The most common causes are prolonged exposure to a dirty diaper and frequent poopy diapers. My daughter’s diaper-rash issue popped up when she started eating a wider variety of foods, some of which were acidic and very loved (like strawberries). Other causes can include: particularly sensitive skin, too-tight diapers, an allergic reaction to a new product and antibiotics.

And this completely surprised me: Some Momsanity mamas alerted me to the fact that an impossible-to-treat diaper rash might actually not be a diaper rash at all—it could be a yeast infection. Who knew?! If nothing works, it’s time to see a doctor. Make sure to ask about this possibility while you’re there.

So, How Do You Treat It?

Change dirty diapers immediately. You’ll want to be on top of diaper changes when your little one is in the throes of a bad rash. Pee and poop exacerbate both the rash and the pain.

Clean the area thoroughly. The problem is, even the gentlest baby wipes can sting your baby’s very red, very sensitive rear end. When things are particularly bad, opt for a damp paper towel and dab at the area lightly.

Dry the area. Moisture is the enemy. Make sure that baby’s bottom is completely dry before applying any medication and/or putting on a diaper.

Use a diaper-rash cream or ointment. The amazing thing about the products on the market is that they work—fast. It’ll take a little trial and error to find the one that works best for your baby, but trust me when I say that when you find the right one, you’ll cry tears of joy. (Scroll down for recommendations.)

Cut down on acidic foods when a rash is particularly bad. A wide variety of nutrient-rich foods is obviously important to your baby’s overall health, but citrus fruits, strawberries and tomato-based sauces can irritate a baby’s bottom when they make their way through the digestive system. You might want to give less of these foods until the diaper rash clears up.

Let air get at it. Kids love being naked, and this is the time to let it all hang out, so to speak. Letting the area breathe, without having moisture trapped by a diaper, is the best and fastest remedy.

Um, How the Heck Do You “Let Air Get at It” with a Baby Who’s Not Potty Trained?

That was my big question. I mean, I was desperate to solve this problem, but I really didn’t want to have pee all over my apartment in the process. (Things were already bad enough with the rash at that point, you know?) So I posed the question to my fellow Momsanity moms on Facebook, and here’s what they told me to do:

Go au naturel outside. Be free, little one! Let babies chill out on a water-resistant mat, and let toddlers run wild with their tushes out. This is great advice if you have a backyard. If you live in an apartment like I do or it’s cold out, it’s unfortunately not an option.

Set up camp in a bathtub. The key here? The tub shouldn’t be filled with water. But get those bath toys out, play your favorite music and keep things nice and contained—where they can be easily cleaned.

Wrap the bottom of a pack and play with a garbage bag, then put a fitted sheet over it. Obviously this could get messy quickly, so—as with all of the other suggestions—be sure to keep a close eye on baby while she’s in there.

Put construction tarp over everything. A mom friend did this when she attempted to potty-train her toddler in a weekend, and it always stuck with me. Not a bad idea if you happen to have some in storage!

Go diaper-free right after your child has wet her diaper. That way, you’ll know you have a little time until the next round.

Cover your kitchen floor with wee-wee pads. Yes, the ones meant for puppies who aren’t yet housebroken. We’re not saying your baby is a dog, but, well, your baby is kind of like a dog. (Check out 13 Ways Your Baby Is Like a Puppy for more on that.)

The Best Products for a Stubborn
Diaper Rash

A&D Ointment: I’m putting this one first because this has been our salvation—the only thing that has worked and worked consistently for my daughter. A&D’s active ingredients are lanolin and petrolatum, and unlike most of the other products on the market, it has a gooey consistency, similar to Bacitracin. I also love it because you can squeeze it on the affected area and then let the diaper mush it around while keeping your hands clean. If the rash is severe, though, I recommend using your fingers to cover the problem area more carefully and thoroughly.

Desitin: The gold standard—or, more accurately, the pasty-white standard—to treat diaper rash. The active ingredient is zinc oxide, and it creates a barrier between your baby’s skin and any pee or poop. The first time I used this on my daughter, it worked almost immediately. Over time, though, it seemed to lose some of its magic, so we went in search of other options and now use this as a backup.

Desitin plus cornstarch: Desitin followed by a sprinkling of cornstarch works wonders on my friend’s little boy. Another idea is to mix petroleum jelly and cornstarch together to make a paste. But one big warning: Cornstarch can actually make certain rashes, like ones caused by a yeast infection, worse. If the rash gets worse after the first cornstarch application, stop using it immediately and talk to your doctor about a possible yeast infection.

Boudreaux’s Butt Paste: Another zinc-based paste that moms love—and not just because of the hilarious name. They say that it doesn’t pull at the skin, unlike the thicker Desitin. Bonus: This will go over particularly well in your house if you also happen to have a preschooler or kindergartner.

Fractionated coconut oil: Coconut oil is the trendy remedy of choice these days, but some Momsanity readers love this natural option. Plus, it smells yummy, which is never a bad thing when you’re talking about diapers. Here’s a recipe to make your own.

Lotrimin and Mylanta: Yes, that would be the cream that treats athlete’s foot and the neon liquid for heartburn relief, respectively. These are off-label uses, obviously, and they should absolutely not be tried without talking to your doctor first. But some Momsanity moms swear by them, and they were recommended by their pediatricians. So, if nothing else seems to be working, ask about these treatments and see what your doctor has to say. Hey, it’s at least worth a discussion!

Diaper-rash creams are a miracle. The only problem? That miracle—especially when it comes in the form of a white paste—is designed not to come off, so when it gets all over your hands, it doesn’t come off. You might think: Big deal. Just use a baby wipe to get it off. Yeah, that’s easier said than done when you’re wrangling a squirmy baby or toddler who wants to launch herself off the changing table and you’re also trying not to get white, pasty cream all over everything.

That’s where the Baby Bum Brush comes in. It’s a soft silicone applicator that lets you apply the cream directly to baby’s bottom, so your fingers never touch the paste. It also has a suction cup at one end, so you can stick it to the changing table, far away from baby’s wandering hands. Genius! You’ll want to kick yourself for not thinking of this first. I know I did.

So, that’s it! Everything you ever (or never) wanted to know about diaper rashes. My parting words on the topic? Diaper rashes tend to recur, so stay ahead of them and take preventive measures consistently to avoid a breakout. Also? Remember that the diaper stage won’t last forever, so this horror will soon be a distant memory. I promise.

Tell Us: What is—or was—your go-to cure for diaper rashes? 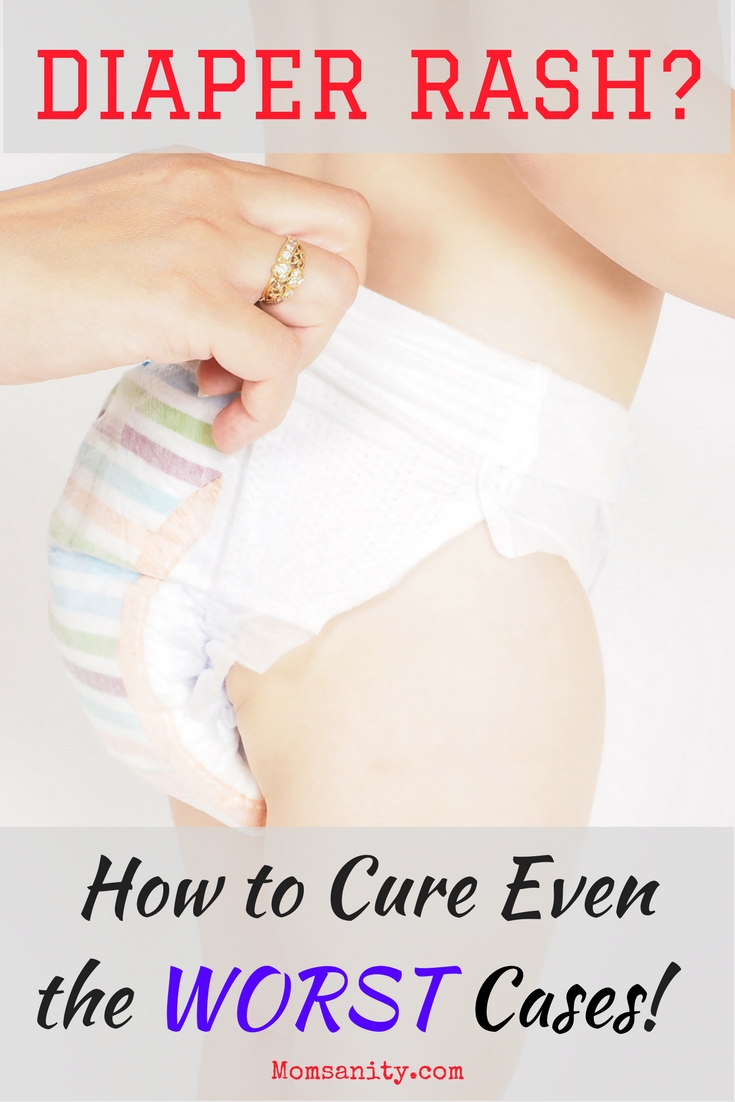