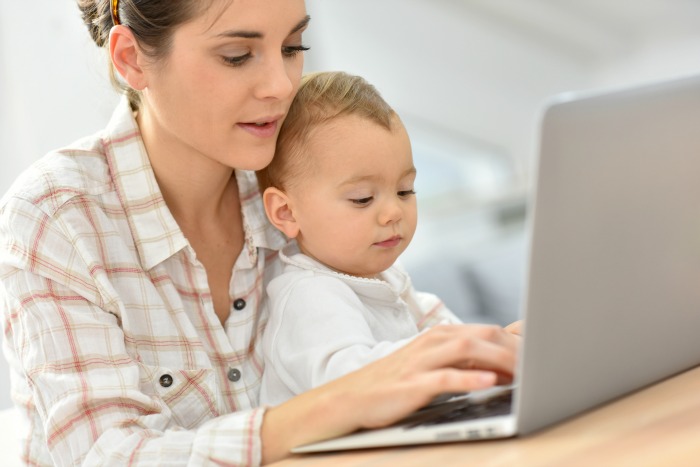 I have been sitting here, staring at my computer screen, for about 15 minutes now.

It’s not even that I have writer’s block. I have a ton of ideas percolating in this lump of rock that doubles as my brain these days. I even have a half-dozen half-finished posts and assorted freelance pieces staring back at me. The problem is that my so-called brain won’t fire well enough to get those ideas down to my typing fingers, and I really don’t have time for that nonsense.

My brain typically doesn’t work well until I’ve had about 15 minutes of putzing-around-time first. A little silliness on Facebook, a little due diligence on Twitter, a little Hoda and Kathie Lee while I sip my third cup of (nicely caffeinated) tea. That was a great lead-in to my at-home work life back in the day—my own little writer’s foreplay, I suppose, before I got down to business.

But as a mom, I feel like I’m in a constant state of anticipation—and not the good kind. It almost feels as if the baby is going to barge in on the main event at the most inopportune time. And the thing is, she will. I’ll just have my clothes on, this is all very G-rated, and she won’t need years of therapy.

It wasn’t like this with my son. He may not have slept through the night till he was 20 months old and the last of his molars finally came in, but he was a great napper. I got stuff done during the daylight hours and even got a break here and there.

My latest little one? Not so much. And that’s putting it mildly.

I read a joking post recently about some kids not wanting to go to sleep because they have FOMO, a fear of missing out. But it’s no joke: That’s exactly what my kid has.

When I think about it, how could she not? It’s just so exciting over here. (And I’m only being partially sarcastic about that.) When her brother is home, he’s always putting on some sort of show for her—literally, complete with instruments, singing, dancing and tickling—and when he’s at preschool, she has undivided mommy time. Why would she want to give up any of that?

Compounding that problem is the fact that she’s a cat-napper. Sometimes she’ll sleep for just 10 minutes and then she’s up, all brilliant smiles and dimples. I mean, she’s happy and a joy to be with and I’m incredibly grateful for her…but couldn’t she give her mama a few more minutes of peace and quiet and productivity in the morning while her big brother’s at school?

Apparently the answer to that is a resounding no.

So I tiptoe and I wait, and in the few minutes to the occasional hour of blissful silence, I hear phantom baby cries, much like I do when I’m in the shower. And on days like today, when I’m moving a little slower because my neck is killing me and I’m still getting over a cold and I’m not totally on, nothing gets done.

Except this post, I guess. Which I wrote just in the nick of time, since I’m starting to hear baby babble coming from the next room.

See also  No, I Do Not Have 10 Extra Minutes

Editor’s Note: And that was a week ago. My little non-sleeper, a delightful stomach flu, my son’s 4th birthday and life conspired against me, and I didn’t even have the mental energy to reread this post until now to make sure it made sense! Ah, mom life.

Tell Us: How do you get anything done—seriously, ever?