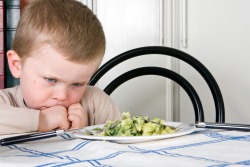 Keep your fancy sandwiches with your un-American cheese.

Keep your panko-and-parmesan-crusted chicken that had the audacity not to come out of a freezer box.

Keep your great-grandmother’s four-generations-tested lasagna and those weird noodles.

As we sat at the diner after preschool the other day, I was about to say, “No, don’t do that,” and then bit my tongue. He was eating, and that was a good thing. And ketchup and assorted dipping sauces were things that I’d been encouraging so that a wider variety of food seemed more appealing to him. It totally worked…but wasn’t there an understood line of decency here? Um, apparently not.

That said, who am I to say that grilled cheese and ketchup don’t go together? I mean, it’s kind of like a cheeseburger, only without the burger. And it was better than the piece of bread with butter that he had eaten right before, especially since he’d attacked that portion of the meal by licking off the butter, then eating the bread. Or the time he’d happily dipped his grapes in ketchup.

And maybe I just need to chill out and let him need to be a 2-year-old boy. He’s a toddler doing his toddler thing, after all…even though this aspect of toddlerhood is making me a little crazy.

He used to be a great eater. I’d puree lentils, chicken, broccoli, bok choy—you name it—and he’d gobble it down with a big, gummy smile. Even after we got past the pureed-mush stage, he was adventurous with his food. But then my excellent eater turned 2 and suddenly wouldn’t eat any of it, and well, I really wanted him to eat.

Once I gave in to his demands, he realized there were options, and I was in serious trouble. Trying to change his mind just made him clamp his lips even tighter and protest even louder. I realized that all I could do was continue presenting a bunch of healthy, delicious, non-kid options and hope that he changed that stubborn toddler mind of his.

It seems that might not just be wishful thinking: Research indicates that if a kid ate a variety of healthy foods before this picky phase hit, he’ll be more likely to eat them again later in childhood.

So…I crossed my fingers and waited.

And then out of the blue a few weeks ago, he finally ate raw carrots (sliced lengthwise so as not to be a choking hazard) and dipped them in babaganoush! Then asked for more. And more! He was seriously eating them like they were candy.

I can also still hide beans in homemade veggie burgers. And take solace in the fact that he’ll eat a few peas while sling-shotting the rest of them with his spoon at the dog. Oh, and he’ll eat fruit. Any type of fruit.

So I really shouldn’t worry about the grilled cheese and ketchup, right? Especially since I have other battles to fight. For example, yesterday he pretended to be a dog and ate his snacks off the floor. And trust me when I say that my floor really isn’t clean enough to use as a plate.