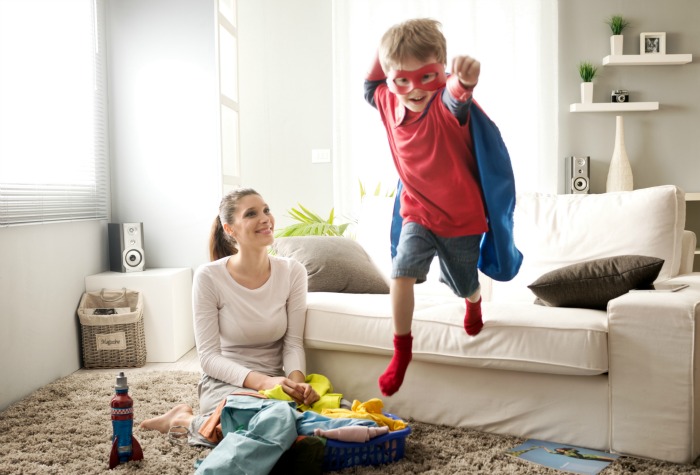 It’s been a helluva week. The kiddo came home sick from preschool last Tuesday, and we’ve been here ever since.

Well, almost. I took him to a speech-pathology session late last week when I thought he was better (he wasn’t—oops), and I had a few hours of reprieve on Saturday for a baby shower. But other than that, we’ve been completely cooped up. It was waffling between 0 and -25 degrees in New York City all weekend, so I certainly wasn’t leaving the house with two kids, one of whom is an infant. Then I got sick. Normally, I would have at least dragged myself out of the house to bring my son to preschool, but he’s had off for Presidents’ Day.

So, here we stay. And there goes my mind.

I can’t believe I’m saying this because I’m usually a total homebody. I love hunkering down at home and pretending like the world doesn’t exist for a while. I mean, I can order pretty much anything and have it delivered to my door. Social media and FaceTime make me feel super connected to my nearest and dearest, even when I’m not. And I have a never-ending list of crap that needs to get done, so it’s not like I’m ever bored.

So, really, why go out when things are rough if you don’t have to?

Because 4-year-olds can’t be contained, that’s why. Now that my son isn’t feverish and miserable, he’s making up for lost play time.

Don’t get me wrong: I am thrilled that he has oodles and oodles of energy, because it means that he’s feeling better. But it also means that he now feels a burning need to use my living-room couch as a trampoline and (lovingly yet repeatedly) head-butt my torso as he’s asking me a question. And forget about getting a Valentine’s Day picture on Sunday. He was one big red-and-white-striped blur.

Also, with all of this sickness bouncing around our house, no one has been feeling up to doing anything at the same time. So, there wasn’t any Valentine’s Day baking. Crafts have been half-assed. Violin practice has not been music to my ears (though I’ve still been super encouraging!). Too much TV has been watched. I have been saying “no” and “stop” way more than I’d like. Oh, and nobody has wanted to nap. Except for me, that is.

I literally almost cried with joy when my son suggested that we take a nap together yesterday. He turned off the lights, told me to get under the covers with the baby, snuggled up alongside us and everything. And then he was up and out of bed 60 seconds later…and then back 60 seconds after that with his lightsaber, which he started banging on the mattress. Turns out, he just wanted to play nap.

But there’s a light at the end of the tunnel. I think. The temperatures are supposed to soar to a balmy (if rainy) 50 degrees today, so at least the air won’t hurt our faces and we can leave the house. Maybe. If I can get out of my pajamas.

See also  Friday Favorites: Vitafive Vitamins and a Coupon for You!

In the meantime, I’m going to try to get this nap game up and running—for real this time.

Tell Us: How do you survive when you’re cooped up at home?