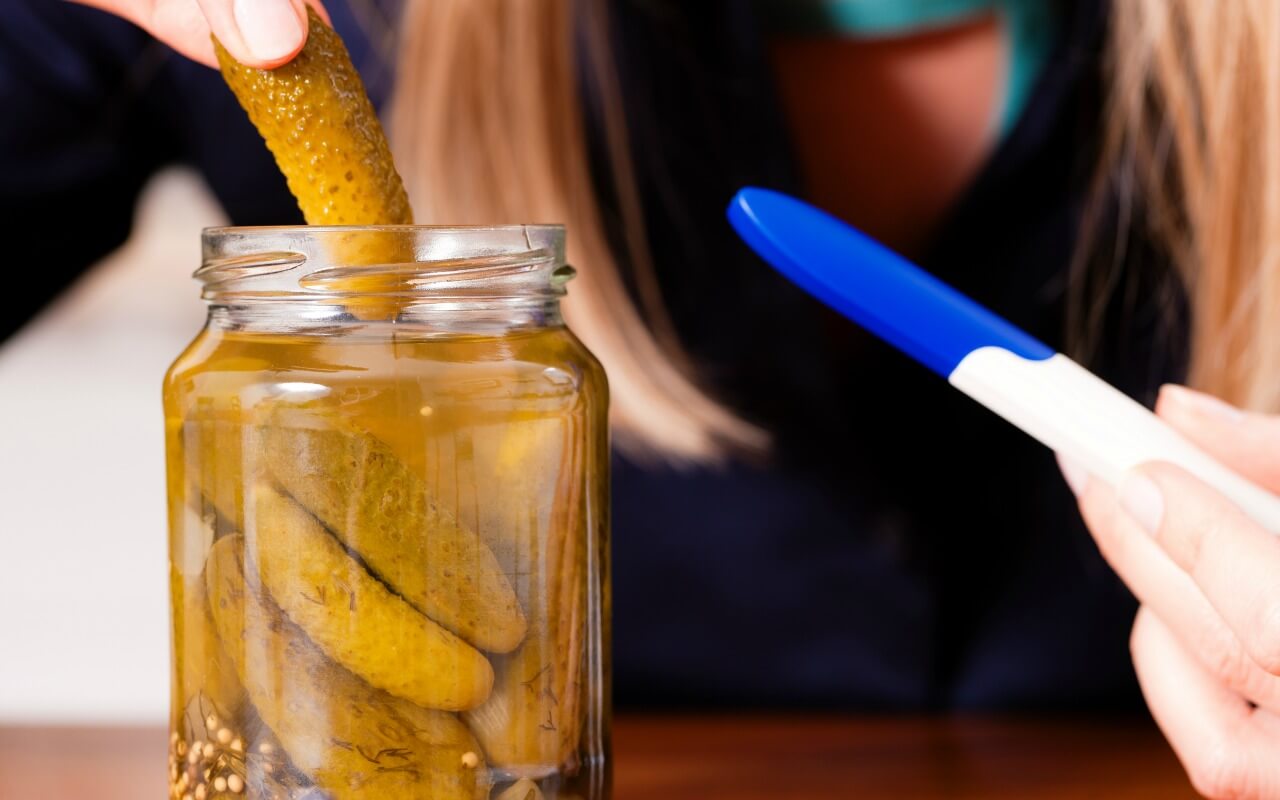 As a married woman of childbearing age, I cannot eat a pickle in peace.

No, if I casually mention to someone that I had some deliciously sour pickles, if I eat one at lunch in public, or—heaven forbid!—post about the fact that I’m craving one on any form of social media, the state of my uterus will be scrutinized and analyzed more than it was at my last ob-gyn appointment.

Are you trying to tell us something???
Want some ice cream with that? *wink, wink*
Craving a pickle can only mean one thing!

Yeah, it means that I like pickles. But if you’d like me to pee on a stick to make sure that I don’t have any other news, I’d be happy to oblige in the free time that I’m not working, tending to my toddler, cleaning my house or washing my hair. (Which, admittedly, these days is an exciting, rare event, considering that I have a toddler.)

This nonsense isn’t just limited to pickles, of course. As women, we cannot mention mood swings, exhaustion, mommy brain, randomly queasy stomachs or laying off the alcohol on a night out. And if we do, it’s apparently fair game and everyone’s business.

But you know what? It’s really not. And an offhand comment can be anything but to the woman on the receiving end of it. Pregnancy is a loaded issue—one that can make us feel like a failure and somehow less than if it’s not working out the way we planned.

Here are some of the things any woman in her 20s through her 40s might have going on in her reproductive life when she’s ambushed with pregnancy innuendos, questions and flat-out accusations.

• I’m trying to get pregnant. Would you like me to send you my ovulation calendar and/or the exact times I’m planning to have sex with my husband?

• We’ve been trying for ages, and I’m having trouble conceiving. But I really needed that reminder during the 30 seconds I hadn’t been thinking about it.

• I am pregnant, but it’s really early. I didn’t know I was required by law to make an announcement as soon as the chosen sperm met my egg.

• I’m not sure we can afford to have more than the one/two/three kids we already have, but I wasn’t planning to go into my financial situation on Facebook. Are you offering to put the next one through college and move in so you can be my on-call baby nurse? If so, great! The hubby and I are getting busy tonight!

• I am done having kids. SO DONE. But if I say that—and in that all-capital-letters tone—you’ll probably think that I’m a terrible mother who doesn’t appreciate the children that I already have.

• I went through three rounds of IVF. A pickle-craving gauge would be preferable to a pregnancy test to see whether or not Round 4 works.

• I just had a miscarriage. Thanks for making that open, gaping wound that much worse.

• Are you just reacting to my statement about pickles, or did you also notice that I gained five pounds recently? Because that’s a burger baby in my belly, not a real baby. And now I feel worse about it.

• My husband and I are having problems. I don’t know if we’ll make it to our next anniversary, let alone to the maternity ward.

• I’m not interested in having kids right now, maybe ever. But hey, thanks for implying that having a baby is the only thing I’m good for and should be interested in.

It doesn’t matter if you’ve got one kid, four kids or no kids. People will ask, tease and probe. Men as well as women, but women, in my experience, are usually so much worse about it. Ironic, considering they’ve likely been there, too.

Do I sound cranky? That’s because I am. And no, it’s not because of (my non-existent) pregnancy hormones. I, of course, fall somewhere on this list. It doesn’t matter where because that’s not the point.

The point is this: Think before you inadvertently sucker-punch someone with a thoughtless comment.

Tell Us: What pregnancy-related questions drive you absolutely crazy?