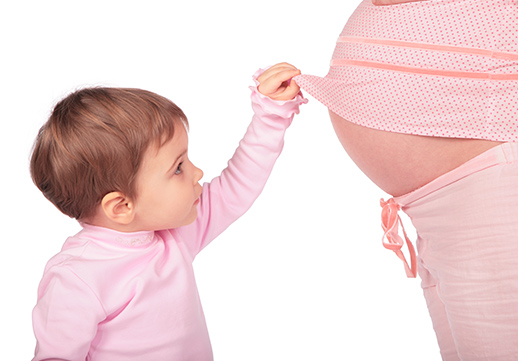 Oh, crap. I think that my body’s back in “I want a baby” mode. And it’s literally my body, not my brain, which is definitely not onboard with this idea yet.

I was sitting in my acting class a few months ago with a woman I know who was six months pregnant, and I could tell from the way she was touching her belly that the baby was kicking. Of course, I couldn’t resist asking her about it, and she gushed about what was happening, just like any excited expectant mom would. The thing that I didn’t anticipate was feeling a ridiculous, hormonal gush wash over me. In that moment, my body ached for the pitter-patter of little feet from inside my body, and I swear to God, I even felt a little phantom kick in empathetic harmony with her.

Not too long after that, I was ordering lunch at a cafe and couldn’t help but chat up a woman who was feeding her newborn. Again, it wasn’t me being friendly. It wasn’t me being casually interested in an adorable four-week-old baby. My uterus literally zeroed in on this child like a homing pigeon and dragged me over there.

My son was 19 months old at the time, and I figured this was a good thing. I did want to have another child, and I didn’t think I’d be mentally ready by the time I wanted to give this another go. I thought we’d start trying, get pregnant (God-willing) and then I’d get excited somewhere along the way. But there I was, not quite ready yet, but not quite as un-ready as I thought I would be.

I worried about how the coming months would play out. Would my body be driving me baby-crazy as my mind screamed back, “But you already have a baby! Having another right now would just mean more difficulty getting the stroller up the front steps, more dirty diapers, even less sleep!”

Now it’s four months later, and I’m still having the same mental and physical tug-of-war. I’ve realized that I’ll probably never be fully ready, but is anyone ever really? I mean, really really? Sometimes you’ve just gotta close your eyes and take the plunge.

That said, how I’m going to juggle a newborn with a young toddler who very much always wants to be with his mama is beyond me. He’s a little tornado, and at almost 2, his language skills, his understanding and his confidence have all started to explode over the last few months. He is my love and my life, and I can’t think of anything I’d rather do than spend every second of every day with him. He’s also still very much a baby. Do I want another little monster invading his space, our space, right now?

But for some reason, I now want to invite another one to join the party, to disrupt our perfect little partnership. Thankfully, I probably won’t have too much time to think about any of this. Case in point: There he is now, waking up from his nap and calling—er, screaming—my name.

TELL US: When do you think the time will be right to add to your family? And what is your ideal spacing between kids?