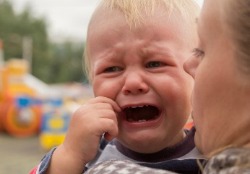 To the parents at the museum who witnessed my child’s second-only public meltdown in his 22 months of existence: Wipe those horrified, judgey expressions off your faces before I smack them off. You know you’ve been there—probably more than I have—so don’t even pretend like you haven’t.

That’s the nice version of what I really wanted to write. The first had way too many expletives for even a rap song.

The funny thing is, I wasn’t feeling upset, embarrassed or out of control during my son’s tantrum. And it was pretty epic. We’re talking screaming, crying, flailing, snot coming out of the nose, sticky drool cascading down to his shirt. It was quite a sight.

Even though we’d only had one other public meltdown, I certainly knew how to calm my kid down on a regular basis, and Lord knows I’d read enough books and posts about how to deal with them when they came. I tried to give him a banana, then his pacifier. Both vehement nos that elicited more screams. I tried hugging him, gently shushing him, rocking him, telling him I loved him and singing to him. Nada. I tried explaining what was happening and what was going to happen next. Ha! Finally, I had to wrestle him into his stroller. Containing him always helps (I cried the day we had to retire our swaddle blankets), and at this point, I knew he just needed to get the heck out of there and get to napping.

At that point, I took a breath and looked up to start strolling us on our merry way…and caught a few parents’ eyes. I had been expecting a little empathy, a little silent support—that “OMG, I feel your pain” smile that people often exchange when something universal is happening. Instead, I was met with complete and total judgment. At best, the looks translated into “my children would never do that,” and at worst, “you’re obviously the worst mother in the world.”

See also  Not Sleeping? You’re Missing Out on More Than Just Sleep

I hightailed it out of there, and honestly, I don’t know who I’m more angry with: The other parents for being complete and total jerks. Or myself for being embarrassed. The one person I wasn’t angry with? My toddler. After all, this is what toddlers do upon occasion! He’s 22 months old, he’s experimenting with his newfound opinions and independence and with testing my limits, and he was tired, hungry and out of sorts. That was my fault, not his.

I may sound like a delusional mama here, but trust me when I say that my little man is one of the most good-natured, easygoing kids on the planet. He shakes things off. He wakes up smiling and thrilled to see me. He thinks everything is funny, and if I could bottle his belly laugh, I’m pretty sure I could achieve world peace.

But everyone has his limit. And I completely and unintentionally pushed him way past his…by keeping him out way too late the night before to hang out with family. By not taking into account that he was getting over a cold. By forgetting to transfer his sippy cup and snacks to the purse I was using that day. By trying to put his coat on before he ate the overpriced banana I bought in the museum cafeteria so he could eat it on the go. (Yeah, no.)

I was tired from the holiday, too, and I misjudged a heckuva lot. But never once did I raise my voice to my child, and under no circumstances would I ever raise a hand to him. If these holier-than-thou parents had taken a second to think past the screams, to see the amount of good mothering I was actually doing in the moment, they wouldn’t have deemed me Mommy Dearest.

So, to the parents with their little angels (for the moment), remember that karma’s a whole lotta fun. Brace yourselves, because it’s coming.

And to the parents I may have judged before I had kids: Um, sorry!

TELL US: What caused your child’s worst meltdown? And how do you try to prevent them?