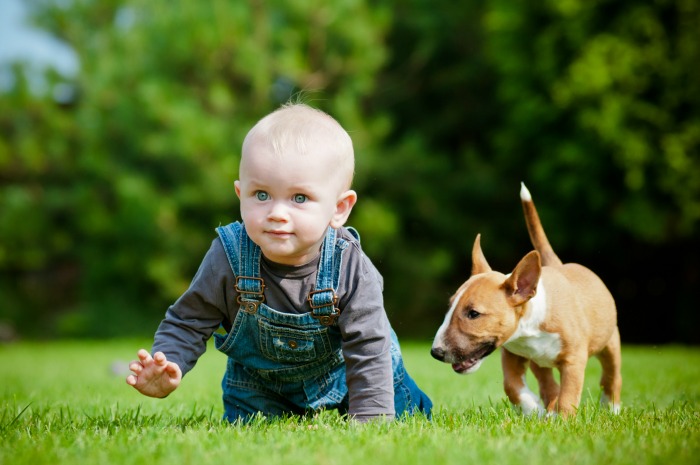 You know how before you have kids, you’re never supposed to say—never even supposed to hint—that you know what it’s like to have a kid because you have a dog?

I mean, you know it’s different, but when you’re looking into that adorable little puppy’s eyes and loving her till your heart practically bursts, you can’t help but thinking there are a few similarities. As the proud mom of a fluffy pomapoo named Lily, I was there. But before I had my son, I would never utter that sentiment under threat of embarrassment or death from my sleep-deprived friends.

Yeah, well, now that I have a dog and a kid, I’m saying it: Babies and puppies are a lot alike. Stomp your feet and protest all you want, but it’s true. Here’s proof…

Their poop becomes a main topic of conversation. Suddenly the most disgusting, most taboo of topics is something you talk about in great detail—in public—and think that it’s totally acceptable. Quantity, texture, color, you name it. And don’t forget about the hilarious poop stories: Your non-dog, non-baby friends will particularly love those!

They can’t tell you what they want. Are you crying for a toy that’s hidden behind the couch? Does your tummy hurt because you were munching on a crayon? Do you want to eat? Poop? Go outside? Be held? For the love of God, just tell me!

You talk to them in an embarrassing baby-talk voice. “Who’s Mommy’s sweet little baby? You are? You are! Mommy loves you soooooo much!” Fess up. You know you’ve said something similar to your dog and your baby. And in both cases, you just want to hug them and kiss them and squeeze them from now till eternity.

See also  Ever Wonder If Your Kids Make People Never Want to Have Kids?

They put a crimp in your happy-hour schedule. Back in the day, you could grab a drink with friends on the spur of the moment. Now, you have to get a babysitter or dog walker, and make sure your little one is being looked after properly before drinking your face off. Plus, you have to be sober enough to take care of them when you get home. Damn you, responsibility.

They put everything into perspective. You could be having the world’s crappiest day, but the second you walk through the door and see that happy face—excited to see you and only you—you realize that life really isn’t that bad. In fact, it’s pretty great. Puppy kisses and baby snuggles make everything better.

When they’re sick, they just want Mommy. To be there while they throw up…or to throw up on you. Either way, it’s love.

They will throw themselves in harm’s way to do something fun. Like you on a bad-decision sort of night, they have no impulse control. You could be walking nicely in the park, engaged in a fun game of throw-the-ball-again-and-again-and—SQUIRREL! Suddenly, out of nowhere, dog and baby (well, toddler) will attempt to throw themselves in the path of speeding vehicles or over a ledge to say hello to a grimy little rodent.

They make you annoying on Facebook. Look how cute your precious sweetie-pie is! Now look again! Oh, and here’s another picture from a slightly different angle…and here’s one more you’ll-never-believe-it story…and here’s another status update. Self-control is hard. (See above.)

You let them come into bed with you in the middle of the night, even though you know you shouldn’t. And then they sprawl out the bed, while you are relegated to one square foot along the edge. (See one of my bed hogs below.)

See also  The Injustices of Parenthood 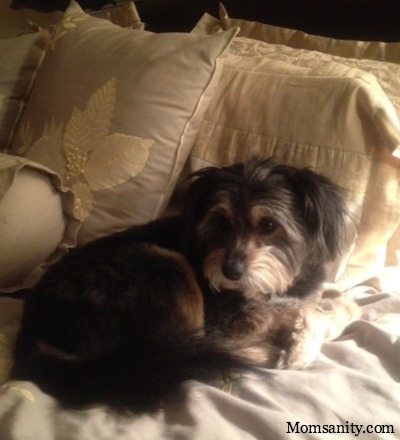 They totally manipulate you to get what they want. Those eyes. That whimpering. The gentle nudges with a wet nose or sticky hand. How could you possibly say no?

They won’t eat their food, so you assume that they’re full…but they always seem to have room for a snack. A cookie? As my 2-year-old says when I correctly guess what he wants: OK, sure!

You put them in ridiculous outfits on holidays. Oh, the indignity. Neither will like it, but only one might up in therapy for it someday. But there’s no way you’re going to stop—I mean, they’re so insanely adorable when they’re all dressed up like that!

You love them so much, it hurts. They are your babies. Just because one of them has fur doesn’t change that.

Tell Us: What’s the most dog-like thing that your baby does?