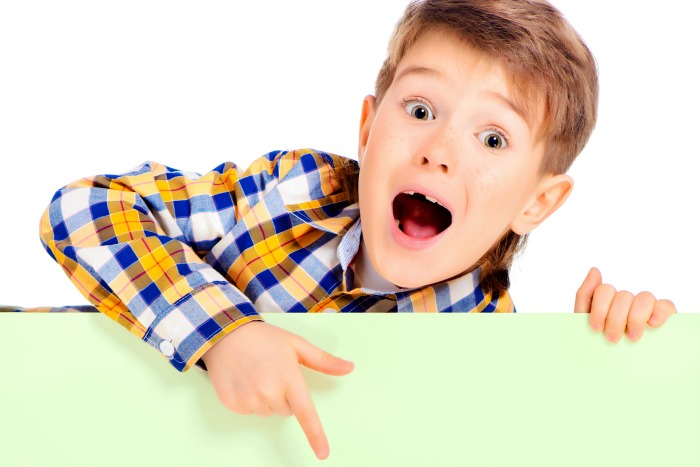 One little word that we’re tempted to say about a million times a day…that has the power to crush a kid’s spirit.

Is that too dramatic? Maybe. But as a parent, it’s ridiculously easy to get into a rut of saying “no,” and that constant negativity isn’t good for anyone. When you say “yes,” you open up a whole other world of possibility for learning, creativity, imagination, fun and bonding.

That said, sometimes you just have to say no. Yes, sure, afterward you’ll follow up with an in-depth lesson or say something profound or whatever, but in that moment, you just have to stop the behavior and say NO. When are those times?

• When your child is hitting. Whether it’s a friend, a sibling or you, NO.

• When you’re standing your ground for whatever reason and you want to make it clear that “no means no.” It teaches an important life lesson on boundaries and respect. So, sorry, kid, but NO.

• When your child is doing (or about to do) something gross. Putting dog food in his mouth? About to reach into the toilet bowl in a public bathroom—or lick the flusher? FOR THE LOVE OF GOD AND ALL THAT IS HOLY, NO!!!

And that’s it: Four scenarios that absolutely warrant a firm “no.” Sure, there a bunch of behaviors that are unacceptable, but there are more effective ways of dealing with them than using that two-letter word again and again. It’s the art of saying no without actually saying no. Here are 13 ways to do just that.

Tactic #1: “Hey, did you see this really cool, really shiny object over here?”
You call it distraction. I call it redirection. This works like a charm with really young kids, but even older kids can be swayed from doing something they really want to do with a cool object or with the promise of doing something even better—and more in line with what you want.

Tactic #2: “I’m in the middle of something right now. Can you be my helper?”
This is a variation on redirection, but it’s a productive one. Kids love to be included in whatever we’re doing, even if it’s just cooking or sorting socks, and nine times out of ten, this leads to a very happy child engaged in a worthwhile activity with you.

One of our main goals as parents is to make sure that our kids aren’t entitled brats. They need to learn that they can’t have everything RIGHT NOW, Veruca Salt–style.

Tactic #3: “Yes, we can absolutely do that tomorrow/after your bath/when hell freezes over (which, you never know, could happen).”
Sometimes a no isn’t a no forever—it’s just a no right now. In those cases, try not to lead with the negative, because that will just cause your child to stomp his feet in protest. Instead, say yes and then add your qualifier. Even though a child might not be thrilled that he’s not getting his way right then, he’ll eventually come around to the idea that he’ll get it eventually.

Tactic #4: “That does look like a really cool toy. We should make a plan to save up for it.”
One of our main goals as parents is to make sure that our kids aren’t entitled brats. They need to learn that they can’t have everything RIGHT NOW, Veruca Salt–style. Instead, set a goal to teach patience, motivation, money smarts and hard work.

Tactic #5: “How would you feel if someone said that to you?”
This is best used when your child uses a disrespectful tone with you. After taking a minute to calm him (and yourself) down, talk to him about what happened, and use empathy to explain why it wasn’t acceptable. This is also a great follow-up to a hitting incident and, really, pretty much everything else.

Tactic #6: “Instead of doing that, please do this instead.”
Reframe the negative behavior as positive behavior that you would like to see. For example, instead of running down the hallway, please walk. A reminder: Don’t forget to add “thank you.” Manners apply to you, too, and you always want to model good, respectful behavior.

Tactic #7: “Do you really think that’s a good idea?”
I’ll say this with a smile to my 4-year-old when he suggests something outrageous or something he knows I’ll nix. He’ll usually look at my smile, break into a devilish smile of his own and say, “Nooooo…” After that, he’ll know it’s off-limits and come up with another idea.

Tactic #8: “Peek-a-boo!”
When you say no to a very opinionated toddler, sometimes you have to pull out the big guns. This can’t be a sweet, calm peek-a-boo with your hands over your eyes. You have to hide behind a fridge door or a wall, let said toddler see you do it, wait for the smile and then jump out. It will make all of your child’s anxiety and willfulness dissolve into a puddle of laughter. This will even work with preschoolers when they’re not too bent out of shape or too focused on something.

Tactic #9: “Quickly, quickly, quickly! Let’s go this way!”
Another redirection for little ones, and one that always results in giggles. You can pick up your baby and run down the hallway or take your toddler’s hand and let her toddle along in her run-walk right beside you. Thoughts of the desired activity or object will be left in the dust.

Maybe it is actually a good idea, but I just need a little time to come around to it. Maybe you can plead your case and I’ll see the light. Or…maybe not.

Tactic #10: “Maybe. We should think about it and see if it’s a good idea.”
I’m not totally mean. Maybe it is actually a good idea, but I just need a little time to come around to it. Maybe you can plead your case and I’ll see the light. Or…maybe not. But either way, it’s not happening right now.

Tactic #11: “I’m so sorry, but it’s closed today. We should make a plan for another day.”
What—you didn’t know that playgrounds could close? They can, and don’t you dare say otherwise in front of my children.

Tactic #12: “I wish we could play with that, but it’s broken.”
One of my girlfriends had a TV that was eternally “broken.” I didn’t have kids when she started this, and while I didn’t fully get it, I thought it was hilarious. These days, I still think it’s hilarious…and I totally get it.

Tactic #13: No words necessary. Just pick them up, turn them around and plop them down in front of something else.
Granted, this only really works with babies and very young toddlers, but enjoy it while you can! 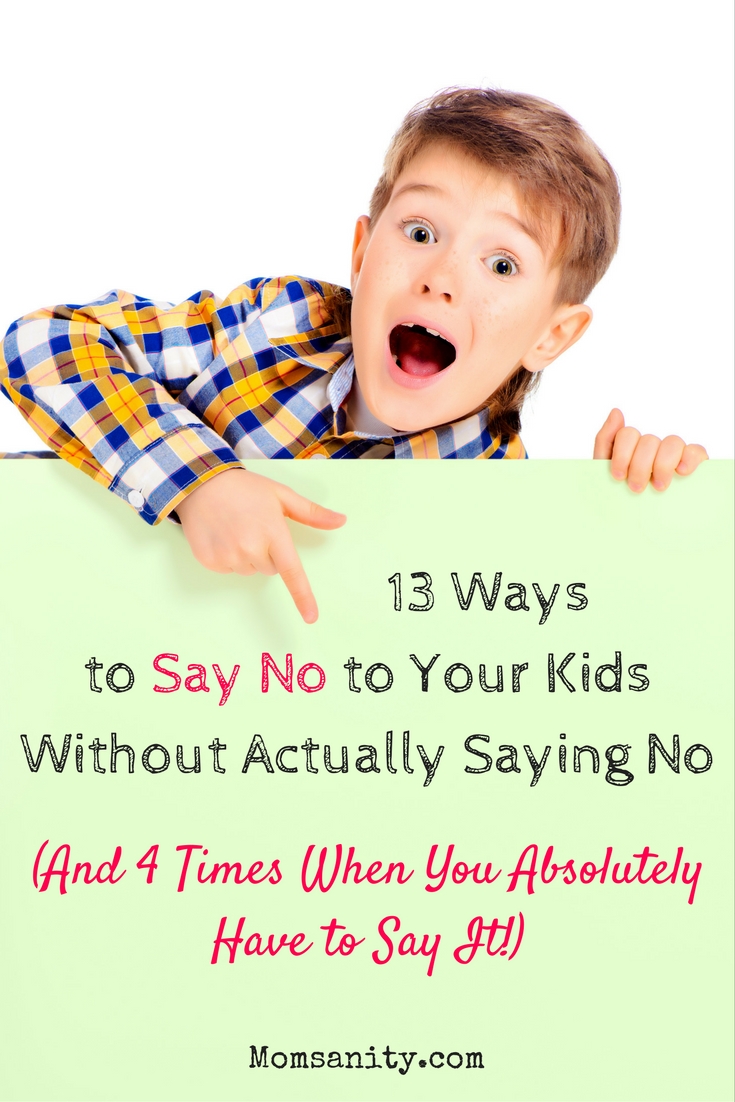 Tell Us: What trick do you use to make a “no” a little less painful to your kids?