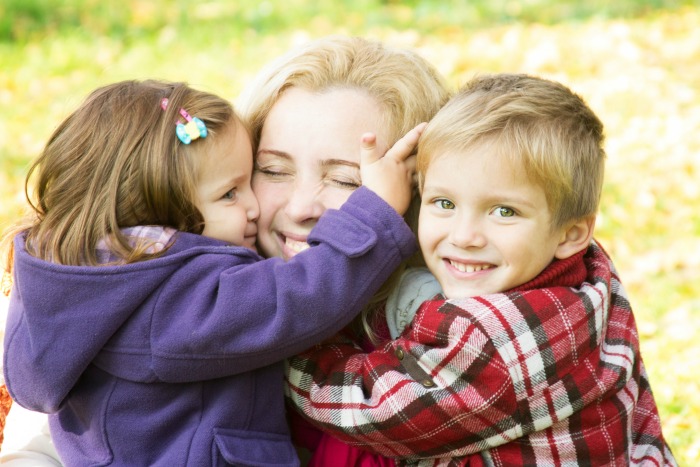 It doesn’t matter if you believe that or not (though it would certainly be nice). It’s just a fact.

It’s why people laugh at sexist behavior, shrug and say, “Boys will be boys.” It’s why 1 in 5 female college students are sexually assaulted—and why that number is probably a lot higher. It’s why people like Brock Turner exist and why judges give them three-month sentences. It’s why Rush Limbaugh mocks the idea of consent and says, “Here come the rape police!” (Which, mind you, are the actual police, just FYI.)

I find this unacceptable as a woman and as a human being, and I’ll be damned if I’m going to let my children think it’s OK to perpetuate this effed-up culture that normalizes sexual violence.

So teaching them how to fight it starts now—or more accurately, it started before they turned 1. Yes, you read that right: I have been teaching this idea to my 4-year-old son and 1-year-old daughter since they were infants.

Now, before anyone jumps down my throat—er, I mean, interjects completely respectfully with their typing fingers—I am not introducing the idea of rape, per se, to my children. What I am doing is teaching them how to be good human beings who respect themselves and others.

And I’m doing it with little lessons that are incorporated into our everyday life. Some of them don’t seem directly related to rape culture, but they are laying the groundwork for how my son will treat women when he’s an adult, for how my daughter will think of her body and for how they will both be able to protect themselves from unwanted sexual advances.

Here are the 13 essential things that I want my kids to know.

LESSON #1: No means no—with everything.
The first time I said this phrase to my son—and, of course, it wasn’t about anything sexual—the power of the words hit me. They were so important, and they were right there at my disposal. How could I say, “I said no. No means no,” when I’m really at my wit’s end, and then give in? He could end up thinking that whoever says no to him will give in eventually if he throws a tantrum or barges ahead anyway. My no might be about not having an ice pop or not watching another show, but it matters. No means no, end of story.

LESSON #2: Tickles are great…but only when you want them.
Building on the idea above, if we’re having the time of our lives during a ticklefest and my son says stop—even if it’s in the middle of hysterical laughter—I stop. Immediately. I’ll ask him if he really wants me to stop, and sometimes he’ll tell me to tickle him some more. Sometimes, though, he’ll stick to his “stop” directive and I listen to him. By stopping, I’m giving him a very basic lesson about consent and making it clear to him that he is in charge when it comes to his own body and what he says goes.

If you can’t think past your own little self-centered bubble, how can you possibly understand how your actions might affect others? Empathy is at the core of what I teach my kids.

LESSON #3: You never have to hug someone—and that includes a relative, a sibling and me.
Relatives and friends mean well. They are so excited to see your little ones, and they want that excitement to be reciprocated. But some days, my kids might not be feeling it, and said adults might be offended. Well, too bad. Psychologists suggest that this is a good way to teach children that they have ownership over their own bodies. Learning those boundaries can help them avoid potentially dangerous situations with other adults—and peers—in the future. So, sorry, Great Aunt Mildred: Hands off unless you get explicit permission.

LESSON #4: If your baby sister is crying, stop what you’re doing immediately.
Sure, part of it is that I don’t want the baby to get hurt. But the other part of it is that I want my son to learn how to listen, how to be empathetic and how to do the right thing, even when it’s in direct opposition to what he wants to do. Maybe she’s crying because she wanted a book that he had, and if that’s the case, how can we solve that problem? Maybe he can offer her another book, or maybe he can read it with her. Whatever it is, he needs to take into account what is going on with her before he makes his next move. And on the flip side, my daughter needs to know that her protests means something, even if she can’t fully articulate them yet.

LESSON #5: Learn empathy and learn it well.
If you can’t think past your own little self-centered bubble, how can you possibly understand how your actions might affect others? Empathy is at the core of what I teach my kids, and of course it’s not all about rape culture. If my son has a conflict with a friend, I’ll ask him, “How did you feel when so-and-so said that to you?” After hearing his answer (which is usually: “It made me feel sad”), I’ll follow up with, “How do you think your friend felt when you said it to him?” A child doesn’t have the opportunity to make those deeper connections if you simply stop the behavior and move on.

LESSON #6: Feminism is a good thing.
I’ve written about this before, and I truly believe that teaching my son to be a feminist is one of the biggest gifts I can give him. Feminism is not a dirty word. Let me explain it again in really simple terms for all of the naysayers out there: It is not about hating men. It is not about getting special treatment because you’re a woman. It is not about playing the victim. It is the not-so-revolutionary concept that all people are equal and should be treated as such.

LESSON #7: “Boys will be boys” is not a thing in this house.
I can’t be any clearer about this. My son’s behavior will not be chalked up to his gender’s perceived stereotypical faults. He is a human being first and a boy second.

LESSON #8: If you see someone being bullied, stand up for them.
Bullying can start younger than many of us realize. If you are not a part of the solution, you are part of the problem. As my kids grow up, I hope this translates into intervening if they see someone being sexually harassed or assaulted, as well as not engaging in sexism at the workplace—or in the locker room.

LESSON #9: You must explain why you’re sorry.
A cursory “I’m sorry” when you’ve done wrong is not enough. They’re empty words when a child doesn’t understand why he’s saying them. Oh, you might think he understands, but more likely than not, he’s saying he’s sorry because he knows it’s expected of him to get back in your good graces and to continue to play. Instead, I insist on having my son explain what he’s sorry for: “I’m sorry for yelling at you,” or “I’m sorry that I threw my toy and hurt my sister.” Whatever his transgression is, I make sure he’s clear about it and why that behavior is unacceptable.

My son’s behavior will not be chalked up to his gender’s perceived stereotypical faults. He is a human being first and a boy second.

LESSON #10: You need to respect my body, too.
If you’ve accidentally pulled my hair, you need to apologize. You cannot tug at my arm if I am in the middle of a conversation; you need to say, “Excuse me, I need your attention, Mama.” You cannot lash out at me physically if you are frustrated. I am a person, just like everyone else. So, in short: You don’t get to pick and choose which people to respect. All people deserve respect.

LESSON #11: You are beautiful, yes, but you are also clever and smart.
This applies to my son as much as it does to my daughter, though I may be a little more hardcore about it when it comes to her. By teaching them to focus on people’s worth beyond their appearances, I hope that they will learn not to objectify others—as well as take a stand if someone tries to objectify them.

LESSON #12: We only use real names for body parts.
I am a little psychotic about this, I’ll admit. My husband said “weiner” one day, our son thought it was hilarious, and I went ballistic. Experts say that using proper names like penis, testicles, vagina and vulva can help keep kids safe from sexual predators. It empowers them, doesn’t subconsciously instill a sense of shame about their bodies, and also gives them the right language to talk about abuse if, God forbid, it happens. Plus, I think that using cutesy words for members of the opposite sex’s private parts can diminish their significance, leading someone to potentially disrespect them. I’ll admit, it’s not always easy for me to use the words—I feel that schoolgirl embarrassment bubbling up occasionally when I do—but I have never once deviated from this rule.

LESSON #13: Be kind.
It’s the simplest lesson and the most important. If kindness rules your interactions with others, you will be on the right path.

It sounds like a lot, I know, but when these teachable moments come up, it’s really just basic parenting. If you’re having conversations about stranger danger and what to do if someone touches them inappropriately, then you should be having these mini talks, too. After all, you don’t want to inadvertently leave your children vulnerable to predators or raise the next Brock Turner, do you? I know I don’t.

Tell Us: What kinds of life lessons do you teach your kids on a daily basis? 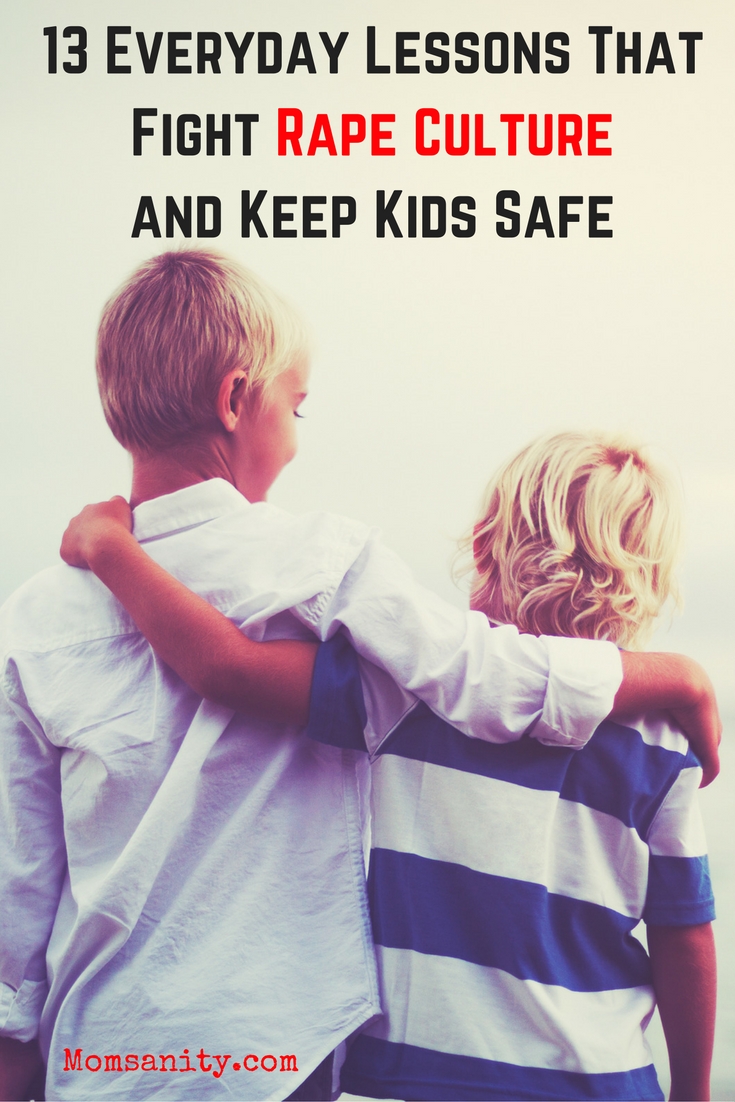