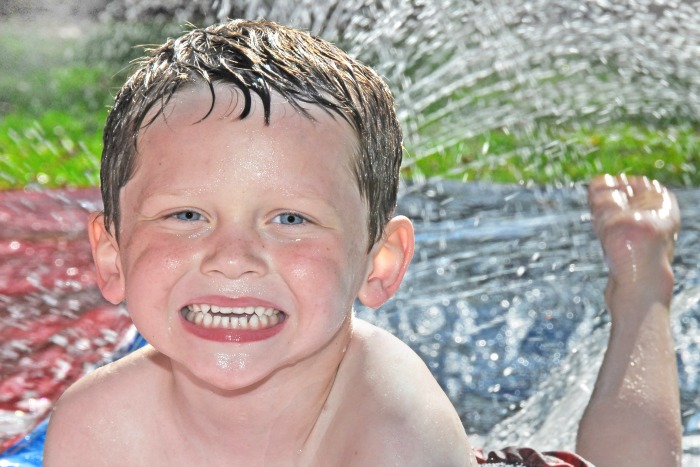 Don’t get me wrong: I’m not a warm-weather, tankini-clad, floppy-hat-obsessed Scrooge. I love summer.

There’s the gloriously gorgeous weather. The maxi dresses and cute sandals. The perfect excuse to claim that pedicures are a necessity. Barbecues. Playing hooky on the perfect beach day. Fun field trips with the kids. Cocktails at sunset (and pretty much whenever else you damn well please).

But when you have a kid, things are a little more…complicated. And messy. And sweaty. And tantrum-y. Behold, the untold delights of summer with small children!

Sand. No need to spend a day at the beach. Just head to the nearest playground. Millions of tiny grains from the sandbox will stick to your sweaty kid, as well as gather in his shoes and pockets. No matter how well you think you’ve de-sanded, it will magically appear all over your house a few hours later.

The crap you need to lug everywhere. Trade in the bulky coats, gloves and hats for soccer balls, baseball bats and bubble machines, not to mention hats, water bottles, a change of clothes, towels, sunscreen and the like. You’ll have just as much crap, possibly more. The difference is that now you’ll be sweating profusely as you schlep it to and from the park.

Sunscreen. You need to apply, then reapply and then reapply some more. If your precious little cherub goes home with more-than-rosy cheeks, you will be convinced that he’ll come down with melanoma in 20 years…and it will be your fault.

Terrifying playground equipment. Every year, it gets bigger and higher and more horrifying, at least from my mommy perspective. Despite the fact that my son is sturdier and stronger than he was last summer, he’s also more daring, and that makes the threat of taking him to the ER with broken bones or a concussion a lot more real. I mean, what geniuses designed all of this playground equipment to be on concrete or padding that’s about as thick as a cracker?

Unexpected mom guilt. The sun is shining, the birds are chirping, the flowers are making you sneeze and you’re hungover. You could persuade your child to stay home and watch Frozen for the gazillionth time, but it’s just so damn nice outside. Remember when you were frozen a few months ago and wished for a day like this? Time to suck it up and hope that the sun doesn’t make your blood-shot eyes actually bleed.

Other a-hole kids. They push, they shove, they cut in front of your sweet child who’s waiting patiently for his turn to go down the slide. They also usually have a-hole parents who are either not paying attention or who are trying to take pictures of said kids acting like a-holes. (That seriously just happened yesterday.)

Burgeoning independence. A free-range parent, I am not, but I’m smart enough to know that I shouldn’t totally smother my kid. He’s started telling me to “watch from there”—way over there—and as long as he’s not doing anything death-defying, I respect his wishes. And when I see him trying to make friends or join in the fun with some older boys, I back off. But wow, is it hard.

Water, water, everywhere. Which means a change of clothes and water shoes. And if you don’t have them, you’ll instead have a wet, shivering child with blue lips who either needs to walk too many blocks to get home or needs to get into a car seat, which you pray won’t acquire an eternally moldy smell. (Reality check: It will.)

Bare arms and legs. The hotter it is, the fewer clothes your kids will wear. And the fewer clothes that they wear, the more likely that they will have scraped elbows and bruised shins. After just a few days, my rough-and-tumble kid’s legs looked like Courtney Love’s legs in the ’90s.

So, yes, it’s complicated. But, hey, at least it’s not winter!

Tell Us: What drives you crazy in the summer?